Eileen Brill is the author of the new novel A Letter in the Wall. She is also a painter and sign language interpreter, and she has written for the commercial real estate, hotel, and restaurant industries. She lives in Elkins Park, Pennsylvania.

Q: You write that the inspiration for A Letter in the Wall comes from an actual letter found in the wall of your house, written by a woman named Joan. How did that discovery lead to this novel?

A: The cryptic nature of the undated letter prompted me to want to know more about Joan and her relationship to the New Jersey boy to whom the letter was written. What I immediately found out, sadly, was that Joan was murdered in 1971 in Oklahoma.

So, my initial goal was to try to piece together a biography of this woman, who had been raised in the Quaker tradition but who seemed to have strayed far from her ancestral and geographic roots.

Public records supplied the basic “skeleton” of her life – her multiple marriages, divorces, the births of her children, the death of her mother and other family members, and her various addresses – but they could not answer the whys. And that’s when I decided that my imagination could fill in the blanks and make Joan into a fully-formed person.

Q: Can you say more about how you researched the life of the actual Joan, and what did you see as the right blend of fiction and history as you worked on the novel?

A: Initially, I used public records from Ancestry.com to give me a framework of timelines and events, and some of that information figured into how I envisioned Joan’s psychological profile (e.g., how her mother’s death during the flu epidemic may have affected 3-year old Joan).

I also found articles on Newspapers.com which revealed bits and pieces about her family and even some things about Joan herself (e.g., an article following her murder had a quote from the sheriff who did, in fact, call her “pugnacious”).

There was so much I could not find out about Joan on the internet, however, so I extended my research.

I visited the archivist at the private high school she attended, and though we were able to find yearbook photos of her two cousins, there were no photos of Joan. There was even an old index card for Joan in the school’s file of student records, on which was written “exited in 1935” with no further explanation.

Joan continued to elude me. Most of what I was able to uncover still did not provide explanations for why Joan’s life unfolded as it did. Creating a psychological profile of her helped me to answer questions which no amount of research could do.

When my imagination took over, I fabricated characters, events, and rationales for how Joan made decisions and what transpired. 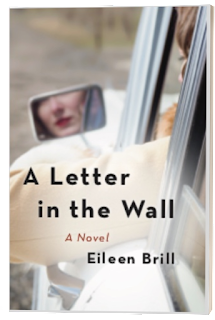 Q: Author Jessica Levine called the book “a fascinating story about a relatable character that reminds us of the ways in which women's choices are shaped either by the expectations placed upon them or their rebellion against those expectations.” What do you think of that description?

A: Well, first off, I was pleased that Jessica found Joan to be relatable. Even if a reader doesn’t always like Joan or the decisions she makes, I want there to be some empathy and insight.

I think most of us struggle at times with meeting the expectations of our families, our cultures, and society in general. It’s easy to judge someone’s decisions as “bad” when we know very little about what informed those decisions.

And I do agree that, in Joan’s case, she is always pushing back – sometimes in ways which were considered inappropriate for the time, which is why some would label her as “rebellious” or “difficult.”

As a teenager, she tries to explain to her father how she sees her future, but her wishes are dismissed and she gets married, still hoping to have some autonomy. As a young wife and mother, Joan, yet again, makes her desires known to her husband and he is also dismissive. So she rebels.

In many cases throughout her life, whenever she feels minimized or challenged, a confrontational side of her emerges. And Joan also has a low tolerance for frustration, so when she is met with resistance, her pushback can be unpleasant.

A: I’m fascinated with how people make life choices -- nature vs. nurture, what is within our control and what is not, etc. – and how one misstep can lead us down a different road.

How might Joan’s have turned out if she had mailed that letter to the boy in New Jersey? Or if Franklin had allowed her to be involved with the business once they were married? Were her life challenges more the result of following other people’s expectations, or because she struggled with her own internal conflicts which she was unable to resolve?

I want people to view Joan as a complex and multi-faceted person who has some redeeming qualities and who, in her own way and on her own terms, evolves from shy, insecure little girl into a confident woman who no longer agonizes over meeting other people’s expectations.

In a way, she’s an anti-heroine who, in the end, earned the validation and respect she always craved.

A: A book of short stories linked by a common thread. That’s all I’ll say!

A: I’ve often been asked if I tried contacting any of the real Joan’s family members. I did not. A Letter in the Wall is not a biography, and I want it to stand on its own, despite the fact that it was inspired by a real letter.

I also realize that it could be a sensitive subject for her remaining family members since Joan was murdered and the case was unsolved. My understanding is that just one of her children is still alive, and she is close to 80.