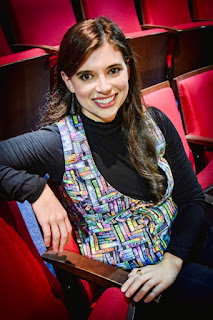 Janet Key is the author of the new middle grade novel Twelfth. She also has written many short stories and plays.

Q: What inspired you to write Twelfth, and how did you create your character Maren?

A: The inspiration for the book came from the deceptively simple thought, “What if there was a treasure hidden in quotes from a Shakespeare play?” I say deceptively simple, though, because that small spark ended up taking years of my life to work into a compelling mystery!

From there, I sifted through a lot of my own experiences growing up a theatre nerd, drew from the type of books I had loved as a young reader, and built around some important queer and/or feminist historical figures and moments that I would have loved to learn about back then. There were also a lot of elements of the book that I drew from the play Twelfth Night.

Similarly, there are elements of Maren that are drawn from my own experience and personality at that age – I was also an introvert and dealing with some heavier issues than my peers – but I also knew she had to be an intensely observant outsider.

She doesn’t take for granted that she’s going to fit in and so is constantly watching everyone else, which ends up being her super-sleuth-power, so to speak.

Q: The Publishers Weekly review of the novel says, in part, “Deftly comparing past and present, the novel explores themes of gender identity and sexual orientation during Hollywood’s ‘Lavender Scare’ and today.” What do you think of that description?

A: I think the description correctly identifies gender identity as one of the central ideas of the book, and, of course, I appreciate that “deftly.”

To be nitpicky, I get a little caught on the “Hollywood’s ‘Lavender Scare’” bit because it seems to conflate the Hollywood Blacklist with the Lavender Scare. It’s an easy mistake to make – both stemmed from the “Red Scare,” the name for a time when Americans were afraid of communist influence in America, and both appear briefly but separately in the book.

But the Hollywood Blacklist is more well-known and widely recognized as an injustice, while the Lavender Scare is a newer term and refers to a moment in queer history that is still largely unknown and untaught: the mass firing of gay people from their government jobs as the result of Eisenhower’s executive order 10450.

I’m not a scholar, but I worry that the Lavender Scare’s importance will continue to be unrecognized if it gets accidentally lumped in with other moments and/or incorrectly identified, as has happened in other instances.

That said, I appreciate that the review correctly identified the central theme of the book, including making the connection to Shakespeare’s Twelfth Night, and spent time discussing the 2015 storyline at the summer camp and the mystery that makes up the bulk of the book. 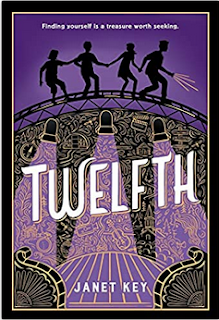 Q: Do you think readers would need some familiarity with Shakespeare and with Twelfth Night specifically to enjoy the book?

A: I tried to make it so that someone unfamiliar with Shakespeare’s Twelfth Night could still enjoy Twelfth, but that those familiar with it might better appreciate specific parallels.

My dream would be to have teachers using Twelfth in the classroom alongside Twelfth Night. I think Twelfth could prove to be a very accessible way to get students interested in Shakespeare, which is often unfairly labeled as “too hard” for kids to understand, and instead showcase his plays as the intense, hilarious, page-turner experiences that they are.

A: For this particular book, I knew the end almost as soon as I began. The book is building to the characters discovering a treasure, so I had to know not only where that treasure was hidden and why, but I also knew early on that the “treasure” wasn’t going to be what the reader initially thought it was.

As much as I loved the quest/treasure hunt novel when I was a kid, very rarely does the discovery and the aftermath feel like it lives up to the expectation. Sure, everybody dreams about finding a bunch of money, but then what?

So I knew two things about the ending because of the treasure: first, that the object of value they had thought they were looking for had already been used to pay for a safe and wonderful life for some people; and second, that something else of value – or something made valuable by a change in historical perspective, shall we say – was needed to take its place.

A: In addition to writing kidlit, I also write adult fiction and scripts, so I feel like my desk is always filled with about 10 different projects, all in various states of chaos.

I’ve finished a YA book about time travel, Las Vegas, and the 1950 nuclear tests that my agent and I will start sending out soon, and I’m currently drafting some other projects set in my hometown of Houston.

As much as I love Texas and will defend it til I die, it’s not currently a very safe space for women and gender diverse youth, among others – but we won’t give it up without a fight. It feels urgent to put that fight into stories right now, for adults and kids alike.