Don Lee is the author of the new story collection The Partition. His other books include the story collection Yellow. He directs Temple University's MFA program in creative writing, and he lives in Baltimore.

Q: Over how long a period did you write the stories in your new collection, and how did you decide on the order in which they would appear in the book?

I believed the collection was done at that point, but then I ended up writing a sixth story, "Commis," in 2021, because I felt I needed to address the coronavirus and the anti-Asian hate crimes that occurred during the pandemic. Since the pub date was going to be 2022, I knew it'd be odd if I simply skipped over those formative events.

I also had three old stories that I'd written between novels, which I revised to include in the book.

I ended my first collection, Yellow, with a novella, and for this book, I wanted to do something similar, and wrote a three-story cycle. It seemed natural to put it at the end. As for the order of the others, I alternated the first- and third-person points of view and genders of the main characters.

Q: The Publishers Weekly review of the book says, in part, that your "characters are Asian Americans who wrestle with estrangement from their homelands, alienation in the United States, and a longing for intimacy in a world of fleeting romance." What do you think of that description? 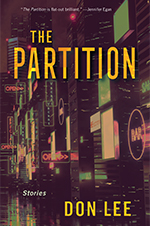 A: Well, the first two descriptors are not completely applicable. My characters are generally second- and third-generation Asian Americans; all except one were born in the US. However, they certainly wrestle with their identity as Asian Americans.

I think the third descriptor is very accurate. They're looking for intimacy, not only through romance, but through a sense of belonging.

Q: You've said, "Someday we will reach the point where writers of color can finally dispense with writing about racism and ethnicity and identity and move to whatever captures our fancy. We'll be able to have characters of color and not have it be the first thing that's mentioned. I wish we were at that stage already. I'm hoping we'll get there soon." How does this idea affect your own writing?

A: It's made me alternate between books that address identity and books that don't address it at all. In my last book, the novel Lonesome Lies Before Us, I had a bunch of Asian, Latino, and African Americans as characters, but I never identified anyone by race, although you could usually figure it out by their last names.

A: The story title came about organically when I was describing a scene, and I thought it was perfect for the book, since all of the characters are Korean American. Their identity is bifurcated by their nationality and ethnicity. Moreover, Korea is divided into North and South by the DMZ.

A: I'm currently gestating an idea for a short neo-noir novel. Related to your previous question, I'm thinking of having Asian characters who won't be Americans, and the book will be a globetrotting affair that moves from Asia to Europe—something different.

A: "Reenactments," the story about a B-movie actor, was inspired by No Country for Old Men, which was filmed near Marfa, Texas, as well as Romeo Must Die, The Replacement Killers, Heat, and all the John Wick and Jason Bourne movies.

There are websites that meticulously list all the weapons and even martial arts moves in those films—a writer's dream for research.