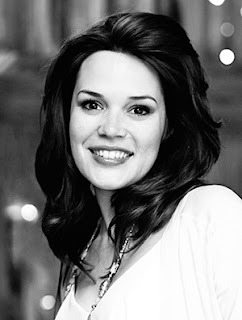 Brooke Hartman is the author of the new children's picture books The Littlest Airplane and Pega Sisters Go to Camp. She lives in Alaska.

Q: What inspired you to write The Littlest Airplane, and what do you hope kids take away from the book?

A: I grew up flying in a bush plane with my father (for airplane enthusiasts, we had a Super Cub), and then later in life with my husband in our Cessna 185, which is a slightly larger bush plane than the one my father owned.

One day my family and I were flying back from our cabin and I thought, you know, I don’t think I’ve ever seen a children’s book about a bush plane?

But I assumed I must be wrong. There was no way the KitLit publishing industry had skipped over such a fun combo—aviation and a story about the little guy! Plus there was so much room here for a STEM component along with a fun story. So when I did my research and discovered such a book didn’t exist, I hurried to write one.

Q: You also have another new book out, Pega Sisters Go To Camp. How did you come up with this idea, and what do you think it says about sisters?

A: I have two girls who really are Lilly and Filly in every way (minus the wings and hooves). One day we were playing My Little Ponies, a personal favorite ever since my own childhood, and we kept using the term “pegasus sisters” to describe two winged pony sisters until my oldest and I realized what we really should be calling them is Pega Sisters!

We then wrote the original version of this story together based on the personalities of my two girls, and the rest is history (pegastory?). 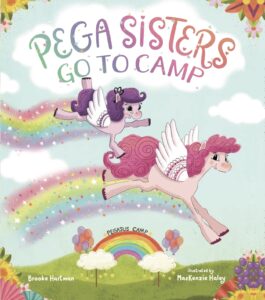 While the book is a lot of fun and fantasy, it’s really a story about the interactions of two sisters who love each other very much, but have very distinct personalities. The big sister, Lilly, wants everything to be perfect, while her little pega sis Filly just wants to have fun—and be with her big sis at all times!

The result is, as you can imagine, a lot of frustration for Lilly. But by the end she’s realized that though they might not always get along, her little sis will always be her biggest ally and friend.

Q: What do you think the illustrations, by John Joseph and MacKenzie Haley, respectively, add to the books?

A: These illustrators are masters of their craft, and it shows in both books. Each style adds so much to the characters, whether with Haley’s winged horses or Joseph’s planes. The expressions, whimsy, and backdrops really shine through and add so much to their respective stories.

Q: What would you say are some of the similarities and differences between the two books?

A: On the surface, these might seem like very different books. And while it’s true that one is truly a nonfiction book including STEM back matter and the other is about mythological horse, these books actually have a lot in common.

First and foremost, they both star characters who fly (I did NOT plan that, but it’s made for some very fun book launch themes!) and both have fun, exciting topics that lure kids in.

But the real reason these books are similar is that they both feature characters with heart who really want to do their best. With The Littlest Airplane, the bush plane wants to be brave and help in whatever way he can, while with Pega Sisters they both want to have an epic camp day and figure out how to do that together as sisters. 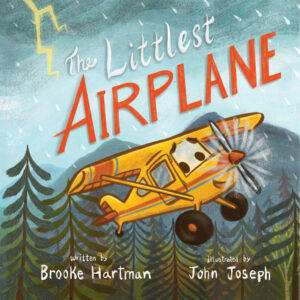 With both stories, I was really reaching for that fun + heart factor, and I hope I found it!

A: I have four titles coming out in 2023: Watch Out for the Lion with Page Street Kids, Little Narwhal Lost and All Aboard the Alaska Train with West Margin Press, and Klyde the Kraken Wants a Friend with Hazy Dell Press. It’s going to be a busy year, but I love all these books and I’m so excited for them to finally come out!

Aside from that, my agent (Sera Rivers of Martin Literary Management) and I have a few projects on sub, so my fingers are crossed for a 2024 title as well.

A: If you’re looking to write books for kids, don’t write another word before you join SCBWI. While I still feel like I’m just getting started as a published author, I credit the many conferences, workshops, and critique groups I’ve attended through SCBWI for any KidLit success!