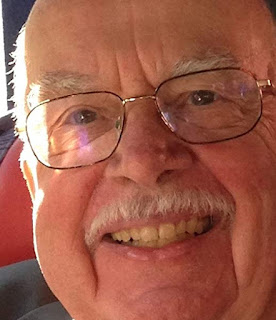 William Grigg is the author, with his late wife, Martha Livdahl, of the novel When Intimacy Can Kill: Kathy vs. Covid-19. He also has written the novel A Perfectly Natural Murder. A former journalist, government spokesman, and congressional aide, he lives in the Washington, D.C., area.

Q: How did you and your late wife, Martha, come up with the idea for When Intimacy Can Kill?

A: Most of my wife’s published works were not fiction but medical.

But for the romance thrillers she was starting to write, she liked to use weather incidents and places she knew in New York City, where an aunt lived overlooking Central Park and, of course, Washington, where she and I had walked out on the Potomac after seeing Jimmy Carter inaugurated. Even cars had driven out on the river on that occasion.

Martha loved these weather happenings; she was a fan of the weather. She’d call her dad in Florida and they could spend a half hour talking about the weather in the two locales before they even thought about family business!

And she brought that interest to plots she dreamed up for her romance thrillers. There’d be escapes over the bay in a thunderstorm, escapes over a frozen river and so on.

She also liked to write about locales she knew, the Mall with fireworks exploding overhead, and the Capitol building. Some of these were published and widely enjoyed.

After she died, I didn’t have the heart to go through her draft writings, but with the Covid pandemic underway, I had no excuse, so I read, and I found a lot to like, but I also noted that climate change would make an escape over an icy Potomac less likely, and protests over police brutality and over the elections had made Washington a different place.

So I looked at a couple of her plots and saw they would have to be revised and rewritten to be contemporary. So, isolated in my house, I began revising and rewriting!

A: I was lucky that friends, Professor Ray Oman and his wife, Kaye, were keeping close watch on the statistics on illnesses, hospitalizations, and deaths related to Covid throughout the U.S. and abroad.

We had many conversations about what state and national efforts seemed to work and what didn’t. Example was key, and trust, of course, and basic knowledge about viruses and vaccines.

Although I’m a former newspaper reporter, in the book I fault public television and many others in government, even Dr. Fauci, for failing to educate.

Without basic knowledge, which still doesn’t widely exist, the public was ready to fall hook, line, and sinker for the lies deliberately spread by the Kennedy kid, the amazingly ignorant cable newscasters, Fox, and others. 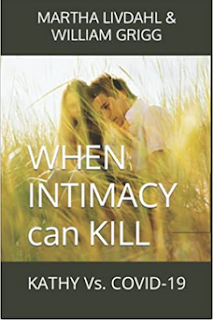 There was plenty of blame to go around, as seen by the U.S. disease and death rates being the highest in the world, surpassing even far larger countries such as India. (But all this is in the background; the main thrust is the love story and the amazing successful effort to obscure family misdeeds, both political and murderous.)

Q: Why did you decide to set the story during the Covid pandemic?

A: I thought it was timely and I didn’t think the pandemic would last so long. I had the book virtually finished when the Capitol building was attacked and I realized no book set in Washington at the time could ignore that or the Floyd protests at the White House! So I went back to the drawing board!

You know, the classic novel by Camus called The Plague was not written and published until 1947--almost a century after the devastating incidents that inspire it.

So I was flattered and gratified that a critic described my book as a Gone With the Wind for our time, using the pandemic as the background for the story much like GWTW used the Civil War.

A: I hope readers find one sweeping, romantic action story which absorbs them and which also contains short vignettes illustrating brave acts by Americans from the Revolutionary War to today’s mini-revolutions.

Most of those short-short stories were based on factual happenings involving Martha’s and my ancestors.

The earliest Grigg was an indentured servant in pre-slavery days who traded his seven-years servitude for the promise of acreage along the James River in Virginia.

Martha’s predecessors included southern Gores and Whitfields and a Choctaw on her mother’s side and Norwegian pioneers in North Dakota on her father's.

Her dad was a Navy gunnery officer whose refusal to obey a command saved many pilots’ lives in World War II. Nice to know he wasn’t punished but ended up an admiral.

A: Because of her key role, Martha gets first billing on the book. Around here, she was the head of GEICO’s internal publications and editor of its prize-winning monthly magazine, The Steering Wheel.

She was quite a party-giver and charity fund-raiser who sold out a preview performance of The Phantom of the Opera at the Kennedy Center on behalf of the House of Mercy/Rosemount Center bilingual preschool.

I am a former writer for The Washington Star, press aide and chief of staff for two U.S. congressmen, and communications chief for the FDA, NIH, and U.S. Public Health Service.

A: The intimacy refers not only to the distancing required to prevent Covid transmission but to the heroine’s two love affairs, the major one with a man who tells his brother he may “want to get rid of her” because she’s learning too much about the murderer in their “distinguished” Virginia family.

Besides Covid, the book deals with those three subjects so-called polite people didn’t used  to talk about: politics, religion, and sex, but without crudity, I hope.