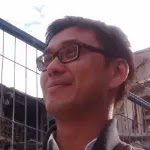 Edwin Wong is the author of the new book When Life Gives You Risk, Make Risk Theatre: Three Tragedies and Six Essays. A classicist and theatre researcher, he also has written The Risk Theatre Model of Tragedy.

A: The book celebrates the work of contemporary playwrights. Every year, the Risk Theatre Modern Tragedy Playwriting Competition (risktheatre.com) attracts hundreds of playwrights who enter for a chance to win over $12,000 in prize money.

In February 2021, I thought it’d be fantastic to put together an anthology of some of the previous winners and finalists. Playwrights Gabriel Jason Dean, Nicholas Dunn, and Emily McClain were all eager to participate.

Dean contributed his play In Bloom, about a journalist who goes too far in the name of “the greater good." Dunn contributed The Value, a play about choices, the price you pay, and unexpected outcomes. Finally, McClain contributed Children of Combs and Watch Chains, a play dramatizing the risks a childless couple will take to become parents.

They are great plays written by contemporary playwrights. My hope is that the book will allow these plays to reach a wider audience.

For the last three years, I’ve also been writing essays on low-probability, high-consequence events in literature for Bob Evans at Salem Press. The essays have appeared in different volumes of the popular Critical Insights series. They cover everything from Shakespeare to Arthur Miller. Because they tie together with my concept of risk theatre, they belong together.

Since I was putting together the anthology, I thought it would be a treat for readers if the first half of the anthology consisted of plays and the second half the essays. This way readers can see both the theory (the essays) and the practice (the plays) of risk theatre. There’s nothing like it. Read it: you will never look at literature the same way.

Q: For those who are unfamiliar with the term, how would you define “risk theatre”?

A: I introduced the term “risk theatre” in my first book, The Risk Theatre Model of Tragedy. It came out in 2019 and is available in audiobook (narrated by Coronation Street actor Greg Patmore), paperback, hardcover, and eBook. In the first three years, it sold over 3,000 copies. Pretty good for a book on a theory of drama! 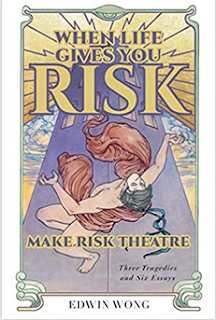 Risk theatre is a new way of looking at plays, whether comedies or tragedies. In risk theatre, risk is the dramatic fulcrum of the action. Characters, by taking inordinate risks, trigger unexpected low-probability, high-consequence events.

Q: Does risk factor into plays across the centuries, or are there some periods where it’s more prominent?

A: Risk isn’t new. It’s an old thing. In comedies risk is timeless: young lovers fall in love. But they don’t have enough money to get married. Or they’re from different social classes. But they go all-in and then, something just happens and they end up getting married.

In tragedy the same happens: young lovers fall in love. They have money. They have a great plan. But something unexpected happens. Risk is inherently dramatic because risk is pushing the boundaries. The audience doesn’t know what will happen. It could go either way, and when you least expect. I would argue that risk is prominent in every period.

A: Readers can expect to have a new sensibility about how chance and the unexpected shape our lives. The random element is really stronger and more influential than we give it credit. When we think of where we will be in five years, we draw up plans, make spreadsheets, put together long-term forecasts. But a lot of things are due to chance.

I remember a couple telling me after reading risk theatre of a great example of a low-probability, high-consequence event in life. They had been married many decades. But how they initially met was in an airport where they had a five-minute window of opportunity. It turned into a life of love that changed both their lives. Just like that, it happened by chance.

Readers, after reading risk theatre, will look at theatre as a dress rehearsal for life. By seeing how powerful the random element is, they gain a deeper insight into life’s workings. It’s an important, and easily overlooked, insight.

A: I continue curating and growing the Risk Theatre Playwriting Competition to bring you the best plays that explore risk. Already since last year, we have another winner: Madison Wetzell won the 2021 competition with her brilliant play, The Lost Ballad of Our Mechanical Ancestor. Her play brings together robots and artificial intelligence in a retelling of the Prometheus myth.

The 2022 competition is open for entries until the end of May. Then the jurors will get to work and declare the 2022 winner in late August. Although risk theatre started recently, it’s starting to gain momentum. Things are just starting to get exciting right around now.

A: Risk theatre is a grassroots arts movement. If you like the idea, please support contemporary playwriting voices by asking your local library to carry either of the risk theatre titles, the 2019 The Risk Theatre Model of Tragedy or the new 2022 When Life Gives You Risk, Make Risk Theatre.

You can find me on Twitter @TheoryOfTragedy or read more on my blog melpomeneswork.com. Thanks for reading and remember that risk is what counts.