William Livezey and Daren Worcester are the authors of the new book Let's Go for a Ride: The Wild Life of Maine's Longest-Tenured Undercover Game Warden. Livezey worked for the Maine Warden Service for 30 years, and is based in Sherman, Maine. Worcester also has written the book Open Season, and his work has appeared in Backpacker and Down East magazines. He lives in New Hampshire.

Q: What was the inspiration behind Let's Go for a Ride, and how did you end up collaborating on the book?

Bill: Family and friends always told me, “You have to write a book!” whenever I shared stories about my experiences as an undercover game warden. So, in a way, they planted the seed.

But my 20-year covert career ended when the Portland Press Herald dangerously outed me as an undercover agent in a front-page news article filled with false and misleading information, so I was also motivated to tell my side of the story.

As for meeting Daren, I consulted with Paul Doiron to provide background info on how we handle fish and game investigations for his Mike Bowdich book series. I mentioned that I was considering writing a book, and he encouraged me to team up with a writer.

Daren: For my part, I wasn’t sure that I wanted to take on the project at first. Nobody likes to have anything negative written about them, so I assumed Bill was being sensitive about an article that—given the source—was likely fair and balanced.

But Bill’s life story—from growing up with a major drug dealer for a father to following in his dad’s footsteps after witnessing him die in a standoff with police and ultimately turning his life around to become a law enforcement officer—was too unbelievable. I had to take a closer look.

Reading the Portland Press Herald article didn’t initially dissuade my reservations. But then I reread it, and I started to see things that simply didn’t make sense. The more I learned from the evidence Bill shared with me, the more I realized that he was right, and I wanted to help tell his side of the story.

Q: What would you say are some of the most common perceptions and misconceptions about a game warden's job?

Daren: I think this depends on the audience. People in urban areas often don’t know what a game warden is, and I have to explain that they’re essentially wilderness police officers.

Those in rural areas have the mental image of wardens hiding in the woods to catch poachers, but that’s merely one aspect of their duties. They also conduct search and rescue operations and regulate recreational vehicle and boating safety.

Bill: Most people don’t realize that game wardens undergo the same police academy training as police officers. We then receive additional training specific to our game warden duties. In fact, the Maine Warden Service is amongst the most elite search and rescue units in the world.

I’ve had the privilege to train and meet many wardens around the country, and we’re strangely similar. As a whole, I’ve never seen a group so passionate, focused, and committed to a specific cause.

Q: Of the various experiences you describe in the book, are there any that were especially meaningful for you?

Bill: The aspects detailing my personal life and convictions are especially meaningful. Fathers have a huge impact on their children, and mine certainly left an impression—both good and bad.

Life is full of challenges, and I’m convinced the Lord is in the business of transforming lives. I’m blessed to be able to share how my life was transformed.

As for the undercover work, it’s not as glamorous as Hollywood portrays. It is a grueling and psychological grind continuously befriending bad guys, even when they need to be caught. But it’s necessary work, and we selected cases that showcase the gamut of undercover warden operations.

Many are complex cases where the bad guys are committing a wide range of crimes in addition to poaching violations, and looking back at it in retrospect, I’m proud to have worked on these cases. 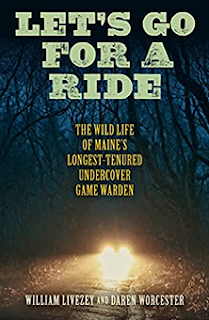 Bill: I hope the book encourages people to be critical readers. We have a chapter outlining how the Portland Press Herald mislead readers, but people shouldn’t just take my word for it either. I encourage everyone to look at the evidence, ask questions, and form their own opinions.

As a sportsman myself, I also hope they gain an appreciation for the necessity of covert fish and game operations to protect and preserve Maine’s wild resources.

Daren: I hope everyone enjoys reading Bill’s stories as much as I did helping him tell them. Bill had an amazing career filled with high-speed car chases, numerous life-and-death scenarios, humorous and compromising predicaments, and even murder plots. The book practically wrote itself!

Bill: My wife and I have recently been hired as house parents for international students at a private school, and we are looking forward to the new adventure.

Daren: I have a volunteering problem :) Between coaching my son’s soccer team, leading his Cub Scout den, and my day job, I haven’t had time to think about my next project. Hopefully, soon…

Bill: Daren won’t say this, so I will: After writing and or verbally relaying the stories in this book to Daren, he was able to put the reader there event after event. I often had to stop reading when reviewing because I was reliving some of the events to the point I was experiencing a little PTSD.

Daren has a tremendous gift for listening and writing, and he did an awesome job with this project!