Robert Peate is the author of the novel The Sun Children. His other books include Ursula. He lives in West Linn, Oregon.

Q: What inspired you to write The Sun Children?

A: I wished to show the evils of theocracy. I wished to make clear to anyone reading that religion should never be in charge of government in any way, shape, or form.

The story could arguably be described as a paean to the separation of church and state. Believe what you wish, but please do not impose your beliefs onto others with the power of government. Doing so does not lead to abuses--it is itself an abuse, compounded by additional abuses.

I felt with the success of The Handmaid's Tale that perhaps another story on theocracy was unnecessary, but a writer friend told me that with the rise of Christian nationalism in the United States, we needed more discussion of such matters than ever before.

A: I did not know how it would end. My friend Dan Nachtrab suggested the ending, which I found to be such a good ending I could not deny it or come up with something better.

Truly, I think the ending is the only logical ending; it just would have taken me multiple novels to get there. A part of me thinks I should have stretched it out longer, but I was too excited for it.

Q: How did you create the world in which the book takes place?

A: The world in which the book takes place is modeled on the Roman Catholic Church, which in its name presents itself as “universal.” What could be more totalitarian? All I had to do was change the religion and make it global. 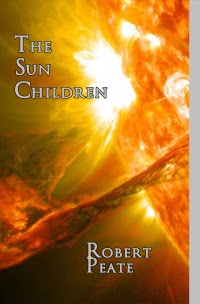 However, in my story, the Roman Catholic Church does take over the world and impose Latin on everyone, so even after the new religion takes over, everything is still in Latin.

I wrote the story in English, but there is enough Latin sprinkled throughout, in the form of character and place names and the occasional phrase, that the reader is reminded my English is meant to be an interpretation of what is happening in Latin. Perhaps someday someone will translate the entire thing into Latin. That would be amazing.

Ironically, though I set out to show the evils of theocracy--and I feel I did so--I ended up with complex characters who caused me at least to root for the good persons whether they worked for the Church or not. The problem, I learned, was bigger than the theocracy--it was what one did with it. Power is just a tool.

A: I never intend to write sequels. Sequels come by themselves when an idea happens that justifies a sequel. I am currently writing Book Four of The Sun Children, which I swear will be the last. I could not stop coming back to this world and these characters, I loved them so much.

A: You should know that the main character of the series, Clovia Nervina, is a 23-year-old elementary school teacher who believes deeply and devoutly in Havo, the Sun God, and His consort, Havia.

At the start of the series, a global infertility problem has reduced the world's population to about 1 billion, the number we had around the year 1800. To impress Havo with how much we value children and how much we love Him, every year the Church sacrifices 10 children by sending them into the Sun.

Naturally, the number of children is low due to the infertility problem, so when there are not enough children, the Church may send anyone up to the age of 25. Clovia is 23, and her father, with whom she lives, gets the letter saying that she has been chosen. I will not spoil any more. I hope you read it!