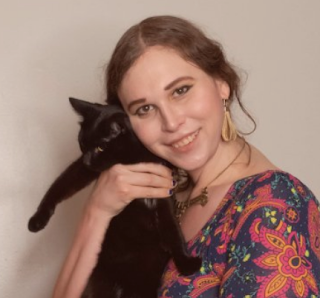 Maya Deane is the author of the new novel Wrath Goddess Sing, which reimagines the life of Achilles.

Q: What inspired you to create your version of Achilles?

A: Ever since I was very small, I've always been fascinated by the Iliad, loved the Iliad, wrestled with the complexities of the Iliad, but there was always a riddle at its heart: Achilles. I was about 12 the first time I ran into the phrase "Achilles among the maidens," and the narratives spun about Achilles on Skyros intrigued and bothered me.

Probably the most disturbing and lengthiest rendition of the Skyros plot in antiquity was Statius, who essentially turned the episode into a transmisogynist trope, casting Achilles as an angry male crossdressing rapist. This didn't sit well with me.

But it took my own transition in my 20s for me to start questioning the authority of those stories and wondering if there was something more to Achilles on Skyros.

Along the way, I discovered that there's a 2,300-year-old tradition of frequently portraying Achilles as a woman, and wherever theater has included women actors, Achilles has been fairly often played by women until the 20th century.

This is a secondary tradition, but the more I thought about it, the more I started to glimpse the Pyrrha behind the Skyros stories: "red as red as fire," a different way to read Achilles that made her story infinitely more complex and interesting.

Q: The Publishers Weekly review of the book says, "Deane’s narrative soars: epic in scope without ever growing tedious, with a huge supporting cast (including many wonderful LGBTQ characters) that readers will have no trouble keeping straight due to their beautifully shaded personalities." What do you think of that description?

A: I love it. My favorite part of the PW review is the part where they call it a "tour de force" that "brings the familiar story to fresh, vivid, and unforgettable new life," but I did work very hard to give each character their own clear personal presence, their own themes and thoughts and patterns and preoccupations and loves and desires.

Frequently I asked myself what it would take for the conventional wisdom about a character to be wrong, for there to be a whole person behind the heroic name. 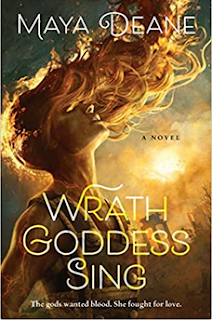 Thus Agamemnon; thus Odysseus and Penelope in a mixed-orientation marriage, where fidelity is simply not a part of their dynamic, allowing Odysseus to be more interesting than "serial cheat"; thus Athena, Helen; thus Melia, who exists in the Iliad only to be slaughtered by Glaukos (I saved her life!); thus Brisewos, passive victim in the Iliad, shows unquestionable agency and what Shelley Parker-Chan called "straight-talking horniness"; and so on.

A: The opening of the Iliad -- μῆνιν ἄειδε θεὰ -- translates literally to "wrath" (with a sense of divine violence rather than necessarily political violence) "sing" (with a sense of any vocalization from a bowstring to a whistle to a song) "goddess" (vocative, so "O goddess").

But I wanted to explore a motion from rage to apotheosis and finally to song, so I transposed the last two words and struck out the inflection to give me the story of my Achilles in miniature.

Q: As you were writing the book, what did you see as the right balance between the traditional Iliad story and your own version?

A: The way I imagined it was this: the Iliad is a brilliant Iron Age folk epic version of events during the downfall of the cosmopolitan Bronze Age Eastern Mediterranean civilizations 500+ years before, so I sought to lift away the Greek Dark Ages veneer from the core of the story to glimpse what might have been the heart of it, if we see this world on its own terms and for what it was.

So I drew heavily on modern archeology, posited substantial syncretism between cultures, and kept my imagination alert for opportunities to imagine the richest possible version of events. Hence the Amazons -- modern archeology and ancient Greek myths both point to very real Amazons nearby Wilusa, and the story is richer for their presence.

On a textual level, the Iliad and Wrath Goddess Sing are more or less compatible, except for Achilles not being a man.

I was very interested in seeing the old from a new angle, so while the major action of most of the Iliad is what the other heroes are doing while Achilles is presumably doing nothing, the major action of Wrath Goddess Sing is what is actually happening to Achilles that whole time.

A: Well, I haven't sold any other books yet, but here's what I've got in the pipeline:

Beautiful on the Horizon is a trans reimagining of the myth of Joseph in Egypt set in the late 18th dynasty, as Akhenaten rises to power over a vast ancient Egyptian colonial empire. I went to Egypt to research it, and my bookshelves groan under the weight of the research materials.

It's sort of a prequel, involving A Character From Wrath Goddess Sing I Will Not Reveal -- but you know who I'm talking about. That book has been through several drafts; I'm very excited to finish the one I'm working on now, though, as it is The One. So I won't say too much about Beautiful on the Horizon.

At some point after that, More Worlds to Conquer (tentative title, but I typed it so it's mine) will be a trans reimagining of the reign of Alexander the Great from the point of view of his trans lover, whom history calls Bagoas. She was understood to be female-presenting and almost invariably portrayed as such in art until the 19th century.

In a lot of ways, it's also a reimagining of the Alexander Romances and other Alexander legends from Greece to Egypt to Central Asia, a wonderfully rich literature that I can't wait to both share and complicate.

For example, the Iskandarnamah has a Bagoas-like figure in Araqit, queen of the fairies, who has an off-again-on-again relationship with Alexander the Great that Aristotle (yes, the Aristotle) is always trying to undermine.

A: Trans women's literature offers us all a new way of understanding old stories. I would argue that our perspective is critical, and that our stories are for everyone, and make everyone's stories richer.