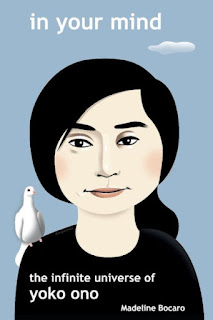 Madeline Bocaro is the author of the book In Your Mind: The Infinite Universe of Yoko Ono.

Q: What initially intrigued you about Yoko Ono, and why did you decide to write this book about her?

A: When I was 9 years old in 1967, I was drawn to a photograph of Yoko in a magazine. It was a review of director “Miss Yoko Ono’s” Film No. 4 (Bottoms), picturing her in front of one of her movie frames – of a naked butt! The idea of filming naked bottoms was delightfully ridiculous, which led to my appreciation of her art.

I grew up during a time when John and Yoko were always in the news, uplifting and teaching me more about life than any pop star or guru ever could. They both understood the power and responsibility of celebrity. John and Yoko always radiated positivity and humor, and they always told the truth. I also loved their music.

Q: What would you say are some of the most common perceptions and misperceptions of Ono?

A: The main misconceptions are that she manipulated John, and broke up the Beatles. As people are now learning, this is untrue. In fact, she was extremely nervous when John Lennon quit the band in September 1969, six months after their wedding.

Yoko was concerned that her artistic freedom would be compromised if John was no longer occupied with the Beatles. As an independent artist, she had never collaborated with anyone. Yoko was concerned when John told her, “Now it’s you and me!”

In the book, I have undeniably debunked all the mistruths, backed up with facts and quotes. The truth is that Yoko liberated John from the constraints he was under as a celebrity, allowing him to be himself. He loved her above everything else. She continues to give us the gift of John’s music and art, and protects his legacy.

Unfortunately, as articulate as Yoko is, she was always publicly asked the same questions about John or the Beatles. She was really given the chance to explain her own position, or her own work. Her far-reaching charitable donations and humanitarian work is done privately and anonymously.

Q: How would you describe the relationship between Ono and John Lennon?

A: The important work that John and Yoko have done is an extension of their intense love story, which is interwoven throughout my book. They had only been together for 12 years, although it seemed much longer.

Individually, they were extremely lonely, suffering, and misunderstood artists. They really saved each other’s lives. These two fragile people – soul mates from opposite ends of the world, came together as one entity. Their identities rubbed off on each other. John became an artist, and Yoko became a rock star!

Although their positive message was that everything was going to be alright, their relationship was very complicated, and at times harrowing. They included us all in their story, and tried to save the world - a task that was much too big for them to handle.

A: I hope that many people who grew up in the 1960s and 1970s will experience waves of nostalgia. Some fleeting yet fond memories will arise and be further explained. I also hope that younger people will understand more about this amazing era - the swinging ‘60s and the turbulent ‘70s.

I have conveyed the deeper meanings behind the work of John and Yoko. Yoko's life story is a lesson in patience, truth, perseverance, and healing. We can all learn many valuable lessons from her. Although Yoko was scorned for so many years, she never stopped trying to promote peacefulness.

Apart from all of her important work, I hope that people will get to know Yoko more personally. Her good-natured spirit and humor shines through. The chapter titled Always Awake and Always Dreaming shares her brilliant observations and unique survival mechanisms which can serve us all.

Yoko’s “cosmic consciousness”  helped bring her to a state of well-being. The chapter titled Premonitions shows that she is extremely intuitive and intelligent, with many future events having entered her psyche or crossed her path early on, in lyrics, events, or during psychic readings.

There’s also a fun chapter about her style, and one about the influences of Japan (where she was born and raised until the age of 19) on her work. Her music is examined in detail. There is a chapter to help understand her vocalizations titled Queen of the Scream.

I mostly hope people appreciate all the hardships that Yoko has turned into constructive life lessons.

A: I am mostly trying to promote my book. It is self-published, so I am on my own. I also write articles for my music blog: www.madelinex.com.

A: This is an incredible story of an extraordinary life. Yoko's extremely wealthy ancestry and unusual childhood of privilege in Tokyo was upended when she and her younger siblings were evacuated as children during WWII, with little to eat.

She emerges as an avant-garde artist in New York, Japan, and London, which leads to her meeting John Lennon and enduring a whirlwind of creativity and media events together.

She is a victim of cruel and unwarranted hatred, which eventually tears them apart for almost two years. Her young daughter is kidnapped by her ex-husband. She gives birth to John’s son Sean on his birthday in 1975. John is murdered right before her eyes in 1980, when Sean is only 4 years old… and that’s only half of her life. The next 40 years were just as interesting and important.

I have spent lots of precious time with Yoko, and my goal and responsibility is to share her amazing insights. My book is a collection of short stories I had written over time.

I personally enjoy biographies written by fans, rather than complex analysis written by critics, professors or historians. My style is straightforward. The reactions have been extremely positive. I hope that more people will appreciate, and be uplifted by Yoko’s amazing story.

Thank you for the interview, Deborah!