Kit Frick is the author of the new young adult novel Very Bad People. Her other books include the YA novel I Killed Zoe Spanos. She is from Pittsburgh, Pennsylvania.

Q: The writer Kara Thomas said of Very Bad People, “A multi-layered mystery and a razor-sharp indictment of privilege in all its forms, Very Bad People is a stunning thriller.” What do you think of that description, and what role do you see privilege playing in the novel?

A: Well obviously it’s a blurb, so meant to be very complimentary, but I think the description regarding privilege is apt; Kara Thomas is a smart cookie! J

At the most idyllic, privileged institutions on earth—like Very Bad People’s elite Tipton Academy—there are always imbalances of power and often corruption. For adolescents navigating the high school experience anywhere, these power imbalances—often between students and the authorities—are front of mind.

So I made addressing these relatable teen issues the focus of the novel’s secret society, Haunt and Rail. It’s the society’s goal to tip the balances of power where they see injustices, which is very noble at face value, but are their methods just and justified? Very Bad People tackles big questions about right and wrong, but it doesn’t offer up easy answers.

Q: Was the Haunt and Rail society in your novel inspired by a particular organization?

A: It wasn't, but I did as much research as I could into secret societies “in the wild” to get a frame of reference.

There are many real ones, of course, mostly on college and university campuses, but I did find some evidence of secret societies past (and possibly present, but if so, no one’s talking!) at the type of elite boarding schools that inspired Tipton Academy. 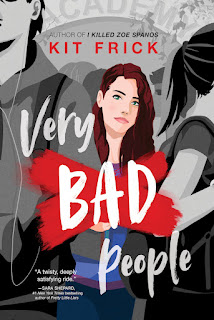 That being said, Haunt and Rail itself came mostly from my own imagination. Designing their “larks” was one of the most fun parts of writing Very Bad People!

A: Very Bad People came from a line in the book, and it speaks to both a specific person/circumstance in the story—which I won’t go into here because spoilers!—and to the larger moral questions the book raises.

Q: How would you describe your character Calliope's interactions with the other students at her school?

A: Often fraught! Calliope must navigate many new relationships, which is part of the experience of being “the new kid” at school, and then there are the added complications of investigating her mother's mysterious death--and the possible ties to Tipton Academy--and of figuring out her place in the Haunt and Rail Society. It would be a lot for anyone to deal with.

Those interpersonal tensions are part of what makes the novel compelling--at least I hope so!

Q: The Nerd Daily review of the novel says, in part, “Frick steeps the book in that gray area where you are not really sure of the right answer.” Do you agree with that description?

A: Very Bad People is all about the morally gray. Calliope spends the whole story seeking answers, and when she gets them, they're not as clean and illuminating as she hoped they would be.

In real life, people are not typically “all good” or “all bad,” and the novel is likewise populated by a cast of characters who challenge Calliope--and the reader--to think about moral ambiguity and the sometimes fine line separating right from wrong.

Q: Do you have any other favorite novels set in boarding schools?

A: I do! In YA, readers seeking more boarding school thrillers or dark academia like Very Bad People should check out Victoria Lee’s A Lesson in Vengeance, People Like Us by Dana Mele, Wilder Girls by Rory Power, Maureen Johnson’s Truly Devious series, and the Get Even series by Gretchen McNeil.