Anne Whitney Pierce is the author of the new novel Down to the River. Her other books include Rain Line, and her work has appeared in a variety of publications, including the Virginia Quarterly Review and The Boston Globe Magazine. She is based in Cambridge, Massachusetts.

Q: What inspired you to write Down to the River?

A: I came of age in an extraordinary time (the 1960s) and place (Cambridge, Massachusetts). As a writer, I wanted to document and immortalize the era, to capture the language and imagery and events and emotions, all drawn from my own very vivid and visceral memories.

As young teenagers, suddenly freed from old rules and restraints, we tumbled headlong into a world of politics, drugs, sex, rock and roll.

I was interested in the myriad dichotomies of the era — power vs. vulnerability, war vs. peace, euphoria vs. fear, abandon vs. caution — and how the unraveling and reinventing of longstanding social, political, and sexual mores played out, not only in the nuclear family, but in the culture at large.

Q: How would you describe the relationship between your characters Chickie and Hen?

A: Chickie and Hen’s first-cousin relationship is complicated and becomes more so as the novel progresses. We meet them as preteens, just as the world as they’ve always known it is starting to shift, erupt, and crumble.

With a growing awareness that no one is really “taking care” of them anymore (a notion that is as exhilarating as it is terrifying), they take it upon themselves (perhaps unwittingly at first) to become one another’s caretaker.

They know each other inside out, share unwavering loyalty and trust in one another, so each becomes the other’s rock, the one constant left in a now scattered “family.” 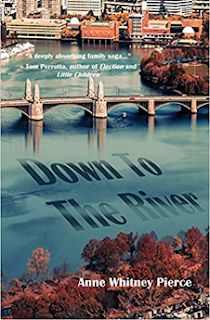 A: I was aware of the basic arc of the story, but the characters surprised me as they grew into stronger personalities and started making decisions on their own that I, as the writer, had not anticipated. I could be more specific but want to avoid any spoilers.

Certain aspects and details of the book were clear from the start, others evolved over time. So I guess you could say it was kind of a joint effort (no pun intended).

Q: The writer Stephen McCauley said of the book, “Anne Whitney Pierce writes about Cambridge, Mass in the late 1960’s with the kind of rich, textured detail that’s missing from a lot of contemporary fiction. Without sentimentality or nostalgia, she brings the period alive with all of its political unrest, social anxiety, and sexual experimentation.” What do you think of that description?

A: Steve was so very generous with his comments. “Rich, textured detail” was certainly a goal, and I’m pleased if I’ve succeeded in bringing the era and the place alive.

What I most appreciated in Steve’s blurb, though, was his mention of the lack of sentimentality and nostalgia in the book, which was an ongoing concern of mine. It would have been so easy to fall into that trap, particularly with the passage of time.

It was important for me to tell it “like it was,” without embellishment or romanticizing.  The era hardly needed either.

I am just finishing up another novel, 53 Pick-Up, which is my attempt at writing a more upbeat and hopefully “commercial” book. I wanted it to be more of a romp, a fun, relatable read, with a good balance between being lighthearted and heartfelt.

It’s the story of a divorced mom in her 50s, who, after 30 years of raising a family, goes back out into the world in the pursuit of “romance.” It’s hardly a “novel” idea. I hope I can bring something fresh to the concept.