Reyna Grande and Sonia Guiñansaca are the editors of the new anthology Somewhere We Are Human: Authentic Voices on Migration, Survival, and New Beginnings. Grande's other books include The Distance Between Us. Guiñansaca is a poet and activist.

Q: How did you both come up with the idea for this anthology, and how did you choose the selections to include?

REYNA: For years now, both Sonia and I, respectively, wanted to put together an anthology that elevates immigrant voices.

In 2020, things finally came together to make it happen—there was renewed interest in publishers for an anthology like this, and within the immigrant community there was much need for this opportunity. Our literary agent, Johanna Castillo, introduced us and paired us to work on this project.

When Sonia and I put out the call for submissions, we were overwhelmed by the number of essays and poems we received. We wished we’d been able to accept them all. The ones we did include in the anthology represent about 20 countries and cover many themes and issues that needed to be highlighted.

Q: How did you decide on the order in which the selections would appear in the book?

REYNA: The themes for the three sections in the book are Migration, Survival, and New Beginnings. As we thought of the placement for the selections, we try to put them in the section we felt they belonged in.

Of course, all the pieces tie into those three themes, but depending on which of the themes was strongest in a particular piece, that’s the section where we put it. We also balanced the essays with poems and visual pieces to further take the reader through this journey.

Q: In the editors' note, you write, “Never has the need for such a book been greater, and we gave ourselves over to the writing and editing of it as if our lives depended on it.” Can you say more about that, and about the events transpiring over the past several years affecting immigrants?

SONIA: The past couple of years we have seen the rise of anti-immigrant rhetoric, fascism, and an emboldened white supremacy movement.

During and post Trump’s presidency we’ve been bearing witness to the attacks on our migrant communities across the country. DACA was under threat, Muslim bans were introduced, there was a surge of humanitarian need for climate refugees and unaccompanied children, among others.

We were also working on this book during the start of the pandemic and saw the lack of infrastructure to support the most vulnerable communities, many of whom were low-income, migrant, working class, and front line workers. I lost many family and community members to COVID-19, but also due to the lack of proper urgent medical care by the state.

Thus, we gave ourselves over to the writing and editing because there was an urgency. This was one way to show up for our migrant communities, and uplift a range of stories that gave a depth to these issues and also pushed us to imagine better worlds because we need something to hope for.

SONIA:  We hope that our immigrant readers can see themselves in these stories and that they feel validated and empowered. For other readers, we hope that every essay, poem, and art helps them reflect on their understanding of migration.

One of the things they will learn is that there is no one migrant story, or one migrant experience. Rather there are many, and they are intersectional, layered, complex, complicated, and nuanced.

And once that is understood, then in the policy space we can move in a proactive direction to address the needs of the many sectors of migrant communities, from access to health care to climate change to LGBTQ+ rights to status adjustment. 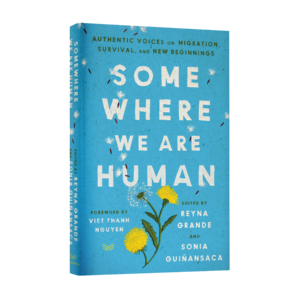 We hope readers begin to reimagine migrant communities with faces, stories, and humanity. And that we can work together to tear down the walls that divide us.

REYNA: In between my crazy book tour, I’ve been finishing the edits to the Spanish version of my new novel, Corrido de Amor y Gloria, which is due out this fall. I am also finishing the young reader’s adaptation of Spare Parts by Joshua Davis. This summer, I will be starting my new book—a collection of personal essays centered around my experiences as a writer.

Our inaugural 2022 Artist in Residence is Alexa Vasquez, who is also one of the contributors in the anthology. For more information, visit HouseofAlegria.com.

I am also working on some installations and finishing my second poetry chapbook, #Papifemme. Most importantly, I am taking care of my mental health and making time for my family.

A: We are kicking off a book tour this June. The launch of the book was June 5 in Los Angeles at The Mistake Room. Two other in-person events will be at the San Francisco Flor y Canto Literary Festival on June 9, and in NYC on June 27. We will also have some virtual events as well. Thank you for celebrating immigrant voices. Buy your copy here!