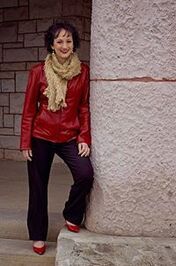 Valerie Niemerg is the author of the new novel Elly Uncomposed. She is a retired opera singer.

Q: What inspired you to write Elly Uncomposed, and how did you create your character Elizabeth?

A: As I pursued my opera career, I was always fascinated by the stories of the operas. These “shows” have been performed consistently for hundreds of years. They seem to transcend times and peoples. Most people don't even watch them in their native language!

It doesn't seem to matter, because the stories of these masterpieces are so powerful. The stories linger on inside us, and hundreds of years later, we are still telling them to a new generation of opera-goers.

When I retired from singing and began writing, I knew I didn't need to look any further to find a great story.

Elizabeth was created through the wonderful magic of the writing experience. I really didn't know her until I sat down to write her story. Then, as I'm sure many other writers have experienced, little by little, she revealed herself to me in each scene, until I felt like I knew her so well, I had in truth known her all along.

Q: Why did you choose The Marriage of Figaro as the focus of the plot?

A: Honestly, I think it's because I sang in that darn show more than any other! As a lyric mezzo, I was perpetually condemned to smaller, supporting roles and I spent a lot of time sitting backstage listening to sopranos sing.

In particular, I seemed to get cast in “pants roles” quite often, I think because I was a shortie. So, singing the role of the page-boy Cherubino, I had a lot of time to listen to Mozart's score and imagine scenarios in my head. I often found myself wondering, “How would a modern girl handle this situation?” 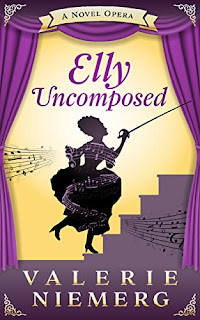 Once, after a performance, a friend of mine said, “I loved the music, but about halfway through the second act I just wanted to take an axe and bust down that closet door!” So, you can guess where I got the idea for Elly's axe problem.

On a more sophisticated note, Marriage of Figaro is a plot rife with intrigue and adult issues. It gave me lots of fodder for Elly's growth and many smaller characters I could build relationships on.

Looking back on the book now, I can see that, despite my best efforts, I think there was something of a nepotistic slant in my writing, because the smaller roles probably ended up getting more page-time and drama than, I don't know…Figaro? And those two sopranos?

Q: Did you need to do any additional research to write the novel?

A: I did not need to do any research outside of reading and rereading Beaumarchais's play. I kept a good English translation on my desk through the whole writing process and referred to it often.

Besides that, most of what Elly flashes back to in her “opera life,” I have either experienced to some degree myself, or witnessed through other singers.

A: I hope they had fun mostly. But whenever someone says to me, “All I know about opera is Bugs Bunny, but I can't wait to go out and buy some tickets!” Well, you can just buy me a high G-sharp. That tickles me silly.

As the director of an educational outreach program for several years for a small regional opera company, it is very close to my heart to pass this art form on to the next generation.

A: Elly Unengaged. Not as opera-centered, but still musical. If I write them all, there will be five total.

I also have written a very silly Cold War spy novel (is that an oxymoron?), which I edit perpetually and weep over. It’s my Cold War Moby Dick…

A: Go see an opera. Something big and fancy with a dead soprano at the end.

*Phantom of the Opera is not an opera. It's a musical.

*Oprah is an American talk-show host, producer, actress and philanthropist. She is not an opera.

*Daytime television has nothing to do with opera…sigh…

*Pretty much all opera houses today have English (or pick your language) translations projected above the stage, or on the back of the seat in front of you.

*Not all opera singers have braids and horns.

*And finally, if you know a mezzo, send her some flowers, darn it. She has to share a dressing room with the soprano who has vases and vases full…stinking sopranos!