Judith Berlowitz is the author of the new novel Home So Far Away. She has taught Spanish and cultural studies at a variety of institutions, including Mills College, and she lives in San Francisco.

Q: Home So Far Away was inspired by a relative's life--how did you learn about your relative, and how did you research her life?

A: First of all, Deborah, I’d like to thank you, for your interest in my book and in Klara.

In 2014, I was searching the Internet for all possible Philipsborn relatives for a narrated genealogy project when I happened upon an article, in German, about the participation of German antifascists in the Spanish Civil War.

The only woman in the group of volunteers from the state of Schleswig-Holstein was a “persecuted Jew” called Clara Philipsborn. This was the first inkling I had of Klara/Clara’s existence.

Digging into genealogical sources (e.g. Ancestry.com) I was able to locate her in Berlin and trace family members down to living relatives, with whom I began to correspond.

These contacts provided conflicting results: Clara’s nephew reported that she returned to Spain after visiting him in London in the last months of the Spanish Civil War, and he never heard from her again. He was sure that she had been killed.

But Clara’s nieces stated that she escaped to “one of those South American countries” and remained a loyal Communist to her death from cancer.

They introduced me to an invaluable source: the digitized archives known as RGASPI (The Russian State Archive of Socio-Political History), and the assorted documents of the International Brigades, transferred to Moscow in 1938 by the Spanish Communist Party.

From RGASPI I have gathered 10 documents that mention Clara’s name, about 16 from other sources, about five family photos (Germany) and one snapshot (Spain) housed at the Tamiment Library at NYU.

Most of this work was done via the Internet in my isolated little office at home, aside from two visits to the Tamiment and one trip to Spain where I delivered a paper and was able to visit some of the spots where Clara had lived and worked. 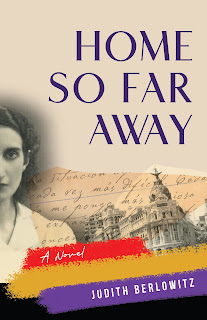 Q: Why did you decide to write the novel in the form of a diary?

A: All this conflicting information, many documents with serious accusations! I felt in these artifacts the presence of “hot spots” branching out and intersecting like nerves through time and space. How could Clara defend herself and what had she gone through?

I had to hear her voice. A biographical study felt like a lifeless undertaking and anyway, there was no documented resolution. The diary format was the most appropriate way to give her a voice within her own possibilities and the limitations of the facts.

A: I think I was partially guided by Ortega y Gasset’s “I am myself and my circumstance.” I also feel the two areas as inseparable so I tried to show the history through Clara’s eyes and through her responses to her experiences, a blend of the interior and exterior.

Clara’s inner growth is fueled as much by outer events as by her own development and her background – her culture, her education, her ancestors.

A: Of course I want people to sympathize with Clara, with her imperfections, and to learn and grow with her, maybe even yell at her at times: (“No, Clara, don’t go there!!”).

I’d like readers to be conscious and sympathize with some “isms” that guided me, without being doctrinaire. Present in the book are various shades of feminism, socialism, geographic belonging, sexual freedom….

I hope people will be motivated to learn more about Spain’s history and culture and about some of the historical characters featured in the book. I would like people to become advocates of historical memory.

A: I am beginning to draw out some of the “supporting cast” of the book in the form of blogs that will follow the individuals (and their circumstances) beyond the period of the book. You can see some of these on my website. I am also working on questions about my book for possible book club use.

A: The ongoing search for stories behind this book has yielded some amazing coincidences and fun anecdotes that I’d love to talk about.