Lucy Ward is the author of the new book The Empress and the English Doctor: How Catherine the Great Defied a Deadly Virus. It focuses on the Russian empress and a British doctor as they combatted smallpox in the 18th century. Also a journalist, Ward lives in Essex, UK.

Q: What inspired you to write The Empress and the English Doctor, and how would you describe the dynamic between Catherine the Great and Dr. Thomas Dimsdale?

A: Inspiration struck in the school playground! Our family had been living in Moscow for a couple of years thanks to my partner’s job (in the far more peaceful time of 2010-12), and when I introduced myself to another mum at my son’s new school back in England, she told me her family also had “a Russian connection.”

I wanted to know more, and she told me – quite casually – that her many-times great grandfather had inoculated Catherine the Great against smallpox in 1768. I was instantly gripped and made her tell me all the details while our kids ran around causing mayhem. The story enthralled me from that moment on, though it was another eight years before I was able to write it.

One of the elements I loved from the start was the fascinating relationship between the sociable, highly political, charismatic empress of Russia and an earnest, rather diffident, quietly-spoken Quaker doctor living in a tiny hamlet outside an English market town.

The key to their bond was trust – Catherine respected his deep medical knowledge and experience, was particularly impressed by his honesty and the fact that he had not set a price for the immensely risky task of inoculating her and her son Paul.

In a court of flatterers, Thomas dealt plainly and openly with her. I suspect she rather enjoyed encouraging him to loosen up a little and enjoy the amusements of the Winter Palace, from pineapples to theatre productions.

Thomas, in turn, was hugely impressed by Catherine’s quick intellect, her charm and informality, and her unshakeable belief in science over superstition. Ultimately, each of them entrusted their life to the other: there is no more powerful bond than that.

They met again when Thomas made a second visit to Russia to inoculate the Empress’s two grandsons, and continued to exchange gifts and letters until the end of their lives.

Q: The book is appearing at a time when world attention has been focused on another public health crisis, the Covid pandemic, and also on Russia. Given that background, what do you hope readers take away from the book, and how would you compare the two eras?

A: I pitched The Empress and the English Doctor just before the Covid pandemic, in November 2019. I never anticipated a book set in the 18th century would be overtaken by events! But as I researched the story and its background during lockdown in the UK, I was struck by the many resonances I encountered.

To be clear: Covid 19 is a dangerous virus, especially for some groups, but smallpox was a devastating killer that could strike anyone, and was fatal in one in five cases.

Nevertheless, the impact of epidemic disease on daily life was remarkably familiar: as smallpox swept into a community, markets and schools would close, courts might be suspended, people would be afraid to travel and were desperate to protect their families. The pain of the loss of loved ones rang down the years.

Likewise – and this really is at the heart of the book – there was widespread scepticism as well as enthusiasm around inoculation, the foundational technology of vaccination, which came to Europe and America from Asia and Africa in the early 18th century.

Inoculation essentially meant fighting fire with fire – giving a healthy patient a minute dose of live virus to confer immunity – and unsurprisingly many people objected to the apparently incomprehensible notion that deliberately making someone ill would ultimately protect them.

The debates around risk and reason that emerged then are still very much alive today, as we saw with the emergence of the Covid vaccines and discussions around compulsion. Interestingly, the first written occurrence I found of the word “anti-inoculators” was in 1722; exactly 300 years later, its successor “anti-vaxxer” is more widely used than ever.

Nevertheless, as Thomas and Catherine’s story demonstrates, confidence in the new technology increased dramatically over the century, to the point that in Britain doctors even foresaw the possibility of eradicating smallpox, almost 200 years before the World Health Organisation finally achieved that goal.

When Edward Jenner published his world-changing proof that cowpox also protected against smallpox (vaccination), he stood on the shoulders of many visionary men and women who are unjustly forgotten. 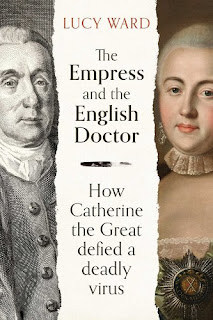 A: I was incredibly lucky to be given full access to the Dimsdale family papers by Thomas’s descendants, and they were central to the book.

As I was writing in lockdown – and also because many of the originals are so precious – they arrived as a kind of Wikileaks-style dump of over 250 images including handwritten letters and other documents, many of them in French.

It took me a while to work my way through and adjust to some of the handwriting, but of course it was an unbelievable window onto the story.

The collection includes letters between Catherine and Thomas (she told him she would always be grateful to him and never forget his care), his private medical notes charting her health each day after her inoculation, and a wonderful health questionnaire the Empress filled in for him setting out her remarkably abstemious diet, her preference for watered-down Burgundy, and the headaches she suffered as a result of rising before dawn and working too hard.

She also confessed that, though she was usually highly disciplined, sometimes she would eat “all that is to be had” – we’ve all been there.

The fact that libraries and archives were closed during the pandemic was a challenge, of course: I had hoped to explore many different repositories and make a second research trip to Russia.

Here, I think, my background as a journalist made me resourceful: I tracked down some incredible digitised collections of medical treatises, 18th century letters and other papers, and discovered that Russian online state archives contain significant chunks of British ambassadorial correspondence.

That meant I could trace the huge anxiety UK diplomats in St. Petersburg and ministers in London experienced as they waited to see if the empress recovered safely from the secret inoculation – only deepened by the fact that the king, George III, was very concerned and kept asking for updates.

One of the most frustrating roadblocks was the closure of the Quaker Library in London, where I had hoped to learn more about Thomas Dimsdale’s faith (his grandfather, who had settled for a while in West Jersey and was a friend of William Penn, was an early Quaker convert).

Here, though, I was saved by a wonderful archivist at Hertfordshire county archive who managed to find me a series of Quaker reports that proved Thomas had been “disowned” – effectively kicked out of the sect – for marrying a non-Quaker in front of a priest.

Finally, I was stunned by just how significant my own county, Essex, was in the history of inoculation in Britain. Not only was Thomas Dimsdale born there, but a rival inoculator who really transformed and democratised the whole technology but refused to share his secrets operated in the same county.

Q: The author Jojo Moyes said of the book, “Mirroring so many of the vaccination issues of our modern age, as well as those of bodily autonomy, feminism, and power, Lucy Ward's lively and in-depth exploration is a must-read.” What do you think of that description?

A: As you can imagine, I was thrilled at this comment! I’m a huge fan of Jojo’s incredible story-telling ability, and her emotionally astute focus on the lives and experiences of women in all their variety.

She is absolutely right to see The Empress as a story partly about bodily autonomy.

I wrote the book against a background of debates over vaccine compulsion and again there was remarkable sense of resonance. Inoculation lies on the borderland between science and emotion: that’s why safety statistics alone don’t always convince people to accept it and trust is hugely important.

The notion that some external authority wants to impose a health intervention on an individual will always be contested, especially when trust in that authority is weak. Interestingly, there was never any inoculation compulsion in Britain in the 18th century (it was introduced in the 19th century and prompted riots).

Thomas Dimsdale and Catherine shared a belief in persuasion and the power of example: there’s a very interesting quote from Catherine on this in the book that I think gives an important insight into her attitude to power.

To turn Jojo’s comment a different way, I see Catherine’s choice to undergo inoculation as a means of reclaiming control of her own body. Her encounters with doctors had often been brutal or absurdly ineffective.

When she was a child, her crooked back had been rubbed daily with saliva from a local servant girl in an effort to straighten it; she had been bled almost to the point of death to treat pleurisy; and again had nearly died through botched treatment after a miscarriage.

In Thomas, she found an experienced doctor she trusted who worked alongside her and listened when she told him: “My life is my own.”

In her later years, when Russia’s power threatened Europe, her body was used as a tool of propaganda – satirists ridiculed her sexual appetite (she had only 12 lovers, incidentally!), and lies were told about her alleged proclivities that persist to this day.

I want to bust those myths and demonstrate that the most powerful and historically important thing she did with her body was to trial a cutting-edge medical technology and set an example.

Women in power so often have their bodies used against them – we’ve just had yet more instances of this in the UK parliament when a woman was criticised for crossing her legs – and I’m determined to highlight this example of female embodied power.

A: I’m hoping to pursue a story linked to The Empress and the English Doctor. I’m fascinated by the advance of science in the 18th century: it’s far too little known, and the thrill of discovery remains electrifying centuries later.

But of course, it’s a highly complex picture: people like Joseph Banks, botanist and president of the Royal Society, intertwined science and the state, linking it inextricably with imperial expansion. That meeting point of science, politics, and culture is the theme I’d like to explore.

A: Where do I start? Well, I’m 52 and – though I have had a career as a journalist - this is my first book, so I hope that may encourage other would-be writers.

Also, dog owners reading this might like to know that Thomas Dimsdale sent Catherine a present of two Italian greyhounds once he came home to England. She adored them and their descendants, and was even painted with her favourite, Zemira, who slept next to her bed and left pawprints on her letters.

They’re buried in a rather eccentric pyramid-shaped mausoleum at Tsarskoe Selo, her palace outside St. Petersburg.