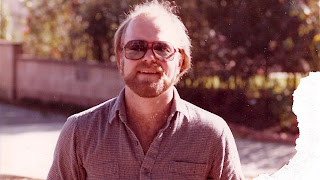 Robert Crane is a contributor to the new anthology Beyond Where the Buses Run: Stories. The book is edited by Theresa Griffin Kennedy. Crane's other books include Crane: Sex, Celebrity, and My Father's Unsolved Murder, which focuses on his father, actor Bob Crane.

Q: How did this collection come together and how was the book's title chosen?

A: I met author/editor Theresa Griffin Kennedy online (as we meet many people nowadays). I was aware of her short story collection - Burnside Field Lizard - which was nominated for an Indie Press award.

We traded short stories - Theresa sent me "Busing Home to the Crows" and "Ravens of Ruby Road" and I sent her "Wingding." That was in 2020. We enjoyed each other's work.

Theresa, by the way, writes fiction (long and short), poetry, nonfiction, reportage. She is a multi-talented writer. We discussed, what now?

Then, as many of us did during Covid, I cleaned out closets with my wife, Leslie, and came upon a box containing many stories by my late wife, Kari Hildebrand. She was an artist, writer, and landscape designer who died of metastatic breast cancer at 41.

We then approached a wonderful actor/writer, Joe Coyle, who contributed to my book Boom! The Baby Boomers Album, an across the board collection of life stories. Joe contributed "Just Outside Lisbon" to Beyond Where the Buses Run: Stories.

I wrote an opinion piece about my dreaded word "closure" and placed it in Medium.com and a young writer named Meagan Bejar wrote a strong rebuttal which we use to close Beyond....

Theresa and I noticed a mood, theme, running through all the stories, characters who were off the beaten path, trying to be good citizens of the world, some succeeding, some not, angst, disappointment, unique people, some lonely, living lives of "quiet desperation" as writer Joe Atkins said.

The title appeared to us after collecting and reading all the stories.

Q: What inspired your contribution, "Wingding," and how did you create your character Tom?

A: My father's (actor Bob Crane) murder in 1978, my attraction to a talented, beautiful woman I met in film school at USC, and writer Tom McGuane's work inspired my contribution, "Wingding," and Tom's (the main character) angst is based on me while his naturalness and improvisation is based on cool actors I admired, such as Jack Nicholson, Dennis Hopper, and Sam Shepard. 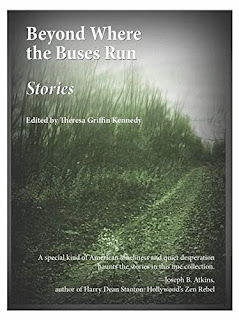 Q: The author Edward J. Delaney said of the collection, "Beyond Where the Buses Run: Stories gives voice to people often voiceless, explores the small turns on which lives change hugely, and illuminates family and community dynamics in places far from the brightly-lit cities." What do you think of that description?

A: I think writer Ted Delaney's blurb for the book is spot on - we offer an outlet to often voiceless characters who you see on the bus or subway and witness "small turns" where the characters are affected or affect other people and all the stories contain characters who are not big city people.

Most of the characters live "small" lives where a minor change can become huge in a moment.

These characters take life day-by-day and when a bump occurs, the characters change/adapt with some success or none at all. Their changes seem to also affect at least one other person near them. They're seeking peace, truth, and trust.

Q: Did you know how "Wingding" would end before you started writing it, or did you make many changes along the way?

A: My story, "Wingding," is 30-plus years in the making. When my father was murdered, I lived a life of rage and disbelief for many years. I transferred those emotions to the main character, Tom, who can be his own worst enemy.

I kept writing the story, changing characters, tweaking dialogue, not knowing exactly where it was going to end. Of course, it had to end with Tom's father getting killed and Tom stepping into the unknown, having to figure life out on his own.

A: Christopher Fryer and I have written a script - Three-Cornered Circle - about a magazine writer, his landscape-designing wife, and actor John Candy, who the writer goes to work for, disrupting his life with his wife. It's got laughs, drama, and, I'm afraid, cancer.

A: Beyond Where the Buses Run: Stories is a two-year journey bringing together strong-willed writers - Theresa Griffin Kennedy, Christopher Fryer, Meagan Bejar, Joe Coyle, Kari Hildebrand, and yours truly - with unique voices, points of view, who do not settle for easy choices.

Rewriting, tweaking occurred until the last second when the final draft was locked.

As a bonus, contributor Joe Coyle took the perfect photograph (in Ohio) for the cover and usually large-scale artist John Cerney illustrated a lonely, past its prime bus stop for the back cover.

I dislike the word "organic" but all the writers, artists, and designer Jeff Cosloy assembled in a relatively easy, fluid manner.

This collection of stories reminds me of my record album-playing days - short cuts, medium cuts, long cut with a drum solo, quiet, loud, strings, guitars. I hope readers will hop on board and spend some time with us.

The book is available at Amazon, Barnes & Noble, and your local bookstore online.