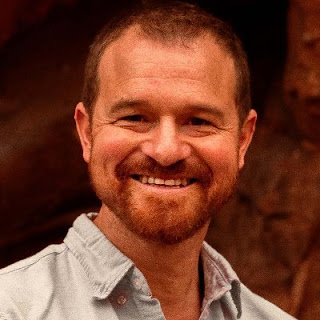 Q: Why did you decide to create another Yoga Bunny book--and why did you choose a bear as the other main character?

A: Why did I want to do another Yoga Bunny book? Initially, for my career. I spent a long time trying to develop a second book with my agent, but we couldn’t find a story that felt right. We also weren’t sure that HarperCollins wanted to do another book.

Eventually I decided I wanted to draw out a new story with these characters, just for the sake of revisiting this world, and giving fans the chance to do the same, even if the story was never officially published.

I drew storyboards for what was a parody of the Step Up movies, with Yoga Bunny and his friends having a yoga-off with a group of bears to decide who gets to use a certain turf in the forest.

We sent this to HarperCollins and Lisa Sharkey responded that she would love to do another Yoga Bunny book, with a different story, which became the now published A Friend for Yoga Bunny.

Having already drawn the bears for my initial sequel pitch, I liked the size difference between a bunny and a bear, which is why we decided on a bear for the other main character.

Q: The School Library Journal review of the book says, “This book is an ideal way to introduce yoga and the ethos behind this ancient practice. They’ll love the motion, as well as the quiet and mindfulness yoga provides.” What do you think of that description, and what do you hope kids take away from the story? 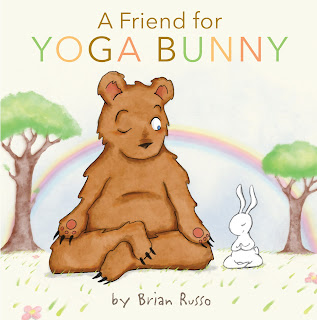 A: That’s a very lovely quote. I don’t think I ever thought in my head, while working on the book, that I wanted it to be all those things. I’m really happy that’s what the reviewer got out of it, and I really appreciate the star review. :)

The thing that I hope young readers can take away from the story is a happy feeling that they can carry with them into their dreams. I want this for the parents too, because I know bedtime can be tough, and I really hope my book can make it a little easier.

Q: What role does yoga play in your life these days?

A: These days, yoga is less about the poses and more about the meditation. I’ve kept up a good habit this year of waking up early so I can afford myself 10 minutes of daily meditation every day.

The great thing that I’ve found about being consistent is other aspects of my life start to feel like they are simply ways of doing yoga: doing dishes, playing with my son, or asking my wife how her day was. To me, yoga has become about connecting the different aspects of my personality, so they can all help each other.

Q: What inspired the story in A Friend for Yoga Bunny?

A: Lisa Sharkey at HarperCollins actually gave a pitch that became the skeleton of the story. It was about Yoga Bunny helping out a new animal friend with her anxiety. I have a few stressful memories from my childhood, so filling in the details came pretty naturally to me.

I’m very proud, for myself, Lisa, and my editor Luana Horry. I love the first Yoga Bunny story because, among other things, it’s the first. That said, I do think we stepped up the story on this second outing.

A: Thanks for asking! I just completed the first draft of a 90-page graphic novel titled Bee & Amanda. It’s set in an Animal Crossing-esque village. It’s about a teenage bunny named Bee who moves in with her best friend, a cat named Amanda.

In this first adventure together, Bee’s having trouble turning her passion into a profession. Things get more complicated when Amanda conjures a troublesome ghost with one of her spells.

I hope to start shopping the manuscript around this fall with my wonderful agent, Sera Rivers.