Brian Russo is the author and illustrator of the new children's picture book Yoga Bunny. He has a teaching certificate in yoga, and he's based in Utah.


Q: How did you come up with the idea for the Yoga Bunny book?

A: What I came up with was the illustrations. I took a yoga teacher certification class in 2010. As part of graduating, we had to memorize a sequence, and I drew the bunny as a visual representation of the poses.

Other people in the class responded to it. I put up a website, bunnyoga.com. It pretty much looks now like how it was. It got pretty popular online. People would forward me something where someone had reposted the images, and it was the kind of traffic I would get on my site with a K after it [representing thousands].

I started selling posters and T-shirts. I wasn’t supporting myself doing it, but it was bringing in a little extra cash.

Lisa Sharkey from HarperCollins had the idea of a book about a bunny doing yoga, independent from me. When she Googled it, my images came up.

First [the idea was] maybe someone else would write it…[but] I had another children’s book I was trying to get out, and they thought they’d give me a shot. I’m a big fan of Adventure Time, more adventure-based, but that was not the tone they wanted. They were interested in something small and simple. 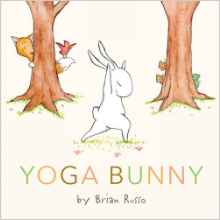 Q: How do yoga, writing, and illustrating fit together for you?

A: One thing I discovered over the course of the yoga thing is that I feel way more comfortable illustrating than teaching yoga! It’s something about my mind—I can’t just write notes, I have to draw stuff.

I got into doing yoga, and that inspired me to draw the bunny in different poses—I was imagining animation of the bunny like a remixed pop song.

I worked as an art model—by doing poses, you find dramatic poses. They would say, Do these poses so your body understands what it’s like to hold these poses. I think when you’re drawing, there has to be a connection between what the character is doing and what you’re doing. You need to understand what that feels like.

Q: Are you still teaching yoga?

A: I took the class because it was something I was interested in, and for a little bit I would teach yoga for friends.

Maybe this is good advice for people considering yoga teaching—it takes a while to get to a point where this is your profession and people are paying you for it. It was expected that you would teach without getting compensated. It’s a long haul.

For me, I discovered that illustration is what I’m more passionate about.

[With yoga,] there’s something I need from it to keep off anxiety. It’s a physical thing that I need. That’s more what it is than the actual teaching. The thing I got from the class is those bunnies, and that gave me the opportunity to do my first children’s book!

I moved from New York to Utah, and I still do yoga, but I do it at home with videos. It can take a while to find a place you feel comfortable doing it. Different yoga studios have different vibes. I need something a little more low-key, and some places get pretty intense.

Q: What do you see as the perfect age group for this book, or doesn’t it really have an age group?

A: In writing the story, my thinking was, this is for very young children because the story is so simple. He’s doing yoga and wants people to do it with him.

Last Friday I read it to 5th graders. I was thinking this is good practice but they are a little too old. I asked them, and they said no, they said they were into it!...

I’m proud of the way the illustrations came out. I worked very hard on it, and I had a team of people coaching me. Having that pushed me beyond what I had achieved before. I’m hoping the illustrations can [amplify] the simple story and make it accessible.

A: I’ve written a follow-up to Yoga Bunny. I hope it will happen—I will have to see if the publisher wants to do another one.

I have a website, theperfectcheese.com—that’s the other book I’m working on. It tells the story of a mouse looking for the perfect piece of cheese he had and lost. I’m pitching the idea for a graphic novel.

[A friend and I] have a comedy pilot we’re trying to get into the hands of someone who can help us. It’s more broad comedy—a Star Trek parody.

I have a couple of other ideas that my agent thought were not quite right for children’s books. Maybe for animation—I’m starting to storyboard them out for animation. Everything takes a long time! I’m hoping the right things will lead to something!