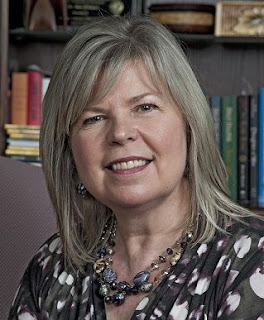 Marsha Forchuk Skrypuch is the author of the new children's picture book Adrift At Sea: A Vietnamese Boy's Story of Survival, written with Tuan Ho. Her many other books for children and young adults include Dance of the Banished and Last Airlift. She lives in Brantford, Ontario, Canada.

Q: How did you end up working with Tuan Ho on his story, and why did you decide to do a picture book?

A: I’ve been writing about Vietnamese boat people since the late 1980s—I was a freelance writer, and was in university when the boat people arrived in Canada and the United States, and I always wanted to write a story [about them].

I wrote two books—one was about Vietnamese orphans in the Canadian version of Operation Babylift, and I’ve written a number of stories about boat people who were children…the stories were too horrific for a child audience.

My publisher knew I was wanting to write a story from a child’s point of view. She met Tuan and realized what a good story he had, and she introduced me to him.

Parents may also [learn from the book]—you reach so many more people. I like to make people feel they’re the one –[in the story] with the main character; that develops empathy.

I wrote the first draft within 10 days of our first interview. 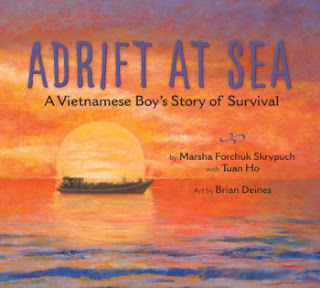 Q: So why a picture book?

A: He was 6 years old at the time [of the events in the book]. I tried to stay as close to his own voice—if it wasn’t a picture book, there would have to be more explanation. The visuals give a lot of explanation.

I’m just back from Europe--I did 24 sessions over five days. [The kids] were captivated and understood—because it’s a picture book they can understand [the characters] coming home from school and being confronted with their mother’s packing up [and saying they need to leave their home].

Q: How did the two of you work together to create the book?

A: I interviewed him one time and then wrote the first draft. We kept swapping back and forth—I sent drafts, he would correct them…I wanted it from his point of view…but other family members could correct him. He did an interview with his mother and wrote it all out for me.

He didn’t do any writing [in the book’s text], but it is his voice. I’m pleased the publisher allowed me to have his name on the cover.

Q: What do you see as the right age group for this book?

A: I’ve just started presenting it to schools. Even kids in Grade 2 are good with it. There’s one scene of people drowning, but because of the nature of the story, a simple narrative from a child’s point of view, even kids that young can understand.

One of the things the kids in Bucharest all wanted to know is what happened to Van [Tuan Ho’s younger sister, who was left behind in Vietnam but later joined the rest of the family in Canada].

I emailed her and asked, Can you send a picture of yourself with your family, so they can see you’re OK? You see the family at the end [of the book in photographs] but you still want to know. 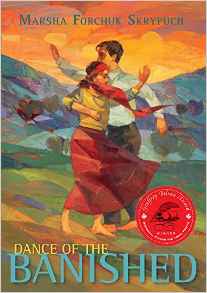 Q: You’ve written about the impact of war in many of your books. What draws you to this subject?

A: I think kids today have it tougher than kids when we were young. I’m in my 60s. It wasn’t easy for me either. When kids read stories during difficult times, it gives them tools to deal with everyday life and put things in context.

If they realize what their parents and grandparents were going through, it doesn’t normalize it, but it gives a context to the suffering. Reading about an event…you would rather have a child learn about war by reading about it than experiencing it.

I could write a story about Tuan who wasn’t a boat person, but it wouldn’t give me the opportunity to find out what he’s made of. Having children plunged into a war and having to resolve their own problems—I find that fascinating. Kids are resilient. Children are the biggest victims of war.

A: One thing—I’m thrilled that I was able to work with [illustrator] Brian Deines. He was shortlisted for the Governor General’s Awards. His work is breathtaking—it transcends the photographic. I love the fact that pre-reading children can go through the book and get the story because the images are so real. 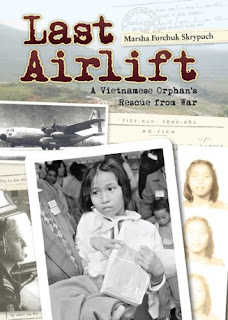 Brian did his own research as well. The people in the book look like Tuan’s family. A lot of people don’t realize that when a picture book is created, the author and the illustrator don’t collaborate. I was so excited [that he was doing the illustrations]. I didn’t get to see them until [soon] before the book came out.

It was not an easy book to do—in the boat, there were 60 people, and a massive amount of work went into [depicting them]. My story is 1,000 words—it was hard to get down to that. That’s why it’s a 40-page picture book; most are 32.

Some people might say there should have been more, but I wanted to have that one arc. You can read about when happened to one million people and you won’t remember it, but you can read about Tuan [and you will].

It’s mind-boggling to me that there has not been a picture book done on that topic ever before. I was so happy I got to do the story I’ve wanted to do since I started writing.

Right around now, last year, since the death of Aylan Kurdi, the little Syrian boy—people [earlier] were not interested in refugee stories. I’ve had books out for 20 years, and only two are not about refugees. I’m glad the readership has caught up to that.

--Interview with Deborah Kalb. This Q&A also appears on hauntinglegacy.com.
Posted by Deborah Kalb at 6:17 AM