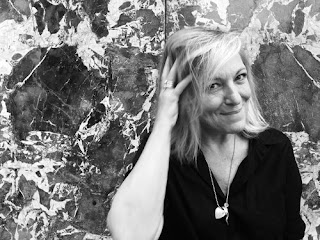 Stephanie Gangi is the author of the new novel The Next. Her work has appeared in the New Ohio Review, among other places. She lives in New York City.

Q: How did you come up with the idea for The Next and for your character Joanna?

A: The Next was conceived after a convergence of my own upheavals. I’d had some health issues and I’d had a heartbreak – and in my vulnerable state, I realized that my thoughts were more consumed with the details of the lost love, and the narrative I was building in my head, than with my health! Luckily I got my priorities straight, but I was intrigued with the idea of a woman who becomes obsessed with a foolish love on her deathbed.

The universal soundtrack the year I began the novel was Adele’s 21, which played everywhere, and was filled with so much bittersweet lust and loss and need for vengeance. I felt Adele was speaking to – and for – so many women who lose themselves in relationships.

As far as Joanna, I loved the idea of an angry woman hell bent on revenge against an unworthy man, and ranting and wreaking havoc all over contemporary Manhattan. Because I’m not so comfortable with anger and violence myself, I used the ghost concept to add some other-worldly distance to Joanna’s fury.

Also, importantly, I was a woman in my late 50s, suddenly single. My visibility factor in the world had changed, noticeably. I thought having my protagonist be a ghost served as a neat metaphor for aging women, rendered invisible by our culture.

Q: The novel deals with a number of difficult and sad topics, but also includes a lot of humor. What did you see as the right balance as you were writing the book?

A: Humor is sometimes the only way to stay grounded, to stay connected to myself when I’m in a vortex of stress or pain or fear. It’s how I rise above the circumstance, get some  healthy distance, so I can see past the fog towards  … well, The Next! 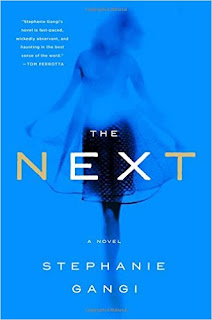 As a writer, the balance was struck when I felt – literally felt, in my body – that the reader (and the writer!) needed some fresh air, a breather from the atmosphere of loss. It was almost biorhythmic. I have been really gratified by readers who’ve laughed and cried reading The Next. That was my secret hope.

Q: One of the main characters, Tom, is a dog. Why did you decide to include him in the book and what role do you see him playing?

A: I have a dog, Enzo, but I had no intention of including a dog character. My own guy is, yes, a standard poodle, and he is certainly my writing companion, and now and then over the course of the hours at my desk, he comes over and gives my arm a nudge with his nose, as if to say, Take a break already. So in a very real sense, the dog nudged his way in.

I think Tom represents all the things that Ned, Joanna’s ex, does not: loyalty, commitment, devotion, unqualified love, everlasting friendship and protection. By the way, Tom is my dear departed dad’s name. He was a good husband and father and I wanted to honor that.

So many readers love Tom! In fact, when I post pictures on Instagram of Enzo, they get the most likes and hearts.

A: The Next was my first-draft, first-choice title. I kept a list of nearly 100 titles, including variations on The Next. My great team of readers, agents and advisors all weighed in with their experience and great ideas. And yet, I kept coming back to The Next. Because when I would tell someone the title, invariably their response was … “The Next what?” and I thought, Yep, exactly. I loved the ambiguity, the mystery, the spirituality.

I’ve had the experience of reading something that has swept me into its world, and when I close the book and look at the title, it becomes even bigger and more meaningful than when I first saw it on a bookstore shelf. The title can attract the reader, but it can also expand the reading experience once it’s over. I wanted that. I pictured a reader closing the book, looking again at the title, and feeling satisfied.

When I got to St. Martin’s Press, I knew I was in the right hands when I asked Jennifer Enderlin, my editor, what she thought about the title. She said, ”What’s there to think about? It’s perfect.”

A: I have a few projects on deck. I’ll be teaching writing workshops for breast cancer patients in early 2017, so I’m very focused on developing a relaxing and rewarding curriculum. With laughs, I hope!

I’m involved in several groups working to protect at-risk communities and causes who may be threatened under the incoming administration.

I’m working on my second novel, and a short story that’s been on my mind for a couple of years. I’m also outlining a novella about a young love rekindled many years later. I do have a day job, so I’m working on doing my best there too!

A: The last thing I’ll say is thank you so much for supporting writers. I sincerely mean it. I’m a debut novelist and I had no idea how difficult the publishing environment is – so very many great books, so many book outlets, so much to choose from. It’s easy to be overlooked or lost in the chaos.

I admire the bloggers who dig in and support my efforts, I really do. I would ask readers for just one thing – do consider posting reviews of books you love on GoodReads and Amazon. It really does help. Thanks!