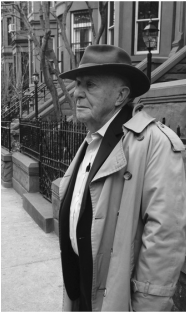 Jay Greenfield is the author of the new novel Max's Diamonds. For many years, he was a trial lawyer with the New York-based international law firm Paul, Weiss. He lives in Manhattan.

Q: How did you come up with the idea for Max’s Diamonds, and for your main character, Paul?

A: Max’s Diamonds begins in 1947, but had its genesis in September 1941, when I was 8 years old. On the first day of that month, Hitler invaded Poland, and the killing of Jews began in earnest.

Later that month, I began to attend an orthodox shul. I went often, four afternoons a week, and on Saturday and Sunday mornings for five years. Through a miracle, I learned almost nothing.

Yet there was one lesson that was drilled into us repeatedly, and it stuck. That is, since before recorded history, the enemies of the Jewish people have tried to destroy us and they have failed.

Of course, the greatest threat came from Nazi Germany. The Nazis systematically and deliberately annihilated European Jews, and made a claim that they wanted to kill all Jews, including me. Thus, there was a corollary to this lesson and that was: Us and Them.

That lesson still resonates today. My own experiences as a happy and successful American is that Us and Them does not describe the America I grew up in. Yet in the early 1940s, Us and Them seemed self-evident.

In 1945, when I was preparing for my bar mitzvah, the camps were liberated and the full dimensions of the Shoah became apparent. I was particularly horrified by the numbers on survivors’ arms. They indicated that to the Nazis, we were no longer human beings, but rather, numbers on the road to extinction.

I had a lot of questions which I was afraid to ask, and was even more afraid to have answered. One was, “What have they experienced?” And, “How did this affect them?” There was a third question that I was ashamed to ask, even in my own mind. “In order to survive, have you done things that compromised your own humanity?”

When I was old enough to get working papers, I worked at Karp’s Kosher Grocery. Among other items, we sold kasha, which is like buckwheat. You make kasha varnishkas with it. Even to talk about it, gives me heartburn!

The job I liked most was to take a little red wagon, and go pass the summer bungalows to the front of a kosher deli on the boardwalk to pick up a hundred-pound sack of kasha, which Karp’s would resell by the pound. It was a pleasant trip with the ocean and people playing pinochle and mahjong on their bungalow porches.

I loved the ocean, and there is a lot about it in the novel. I loved the boardwalk and the salt air. But most of all, I loved to show off how I could pick up a hundred-pound bag of kasha! I was 14 and skinny. 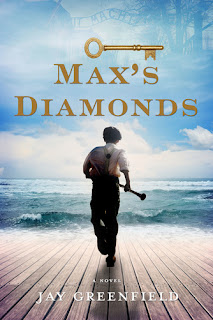 One day, instead of the usual man bringing out the kasha, it was brought by a man behind the deli counter with numbers on his arms, and he was coming toward me.

As he got closer, I froze. He said something, but I had no idea what it was. I realized that I was staring at his numbers, and he realized it, too. He scowled, and without another word between us, dropped the kasha into the wagon. I lugged it back to Karp’s, and from then on, picked it up in the back, in the kitchen where I would not have to see him again.

More than half a century later, much more, when I sat down to write Max’s Diamonds, I did not know what the story would be, but I knew I wanted to start with the numbers.

I wanted a central character whom I call Paul Hartman, to be someone who did not suffer physically from the Holocaust, and who was not a child of survivors.

He was someone who benefited from the Holocaust financially because a cousin of his, Max, in some way or other, had gotten diamonds into America shortly after he was liberated from Auschwitz.

I wanted--and I did this--to have a character who lived the American dream with the help of those diamonds. They sent him to Columbia and Harvard Law School, and one of them shown on the engagement ring he gave to Sibyl, who started out as his high school sweetheart, became his wife and then nearly killed him.

The diamonds helped Paul live the American dream, before they nearly destroyed him.

…How could I not [write about the impact of the Holocaust on a Jewish family] when simply being Jewish was a death sentence during World War II.

A: No, I did not know how the book would proceed until the muse guided me.

Q: You’ve now published your debut novel at age 83. Did you always write fiction during your law career, or did you turn to it once you retired?

A: Between the time I joined Paul Weiss in 1961 and the time I left in 1994, I took several writing classes. When you are an associate in a large New York law firm trying to make partner, you must be totally immersed.

After I became a partner in 1970, I would occasionally spend part of my summer vacations taking writing workshops. I got great encouragement when one of my stories was published in Paris Transcontinental, a well-regarded literary magazine. I continued to go to writing workshops.

At some point, I became more interested in writing novels than short stories. I found writing short stories less satisfying to write and to read. However, novels take a long time to write. For me, writing fiction requires total immersion. Eventually, I would have to retire full-time in order to write.

My cousin, Howard Sackler, who won the Pulitzer Prize in 1969 for his play, The Great White Hope, has always been an inspiration, and I have always wanted to write.

A: I am more than halfway through my second novel, Almost Friends, focusing on the complex and often strained relations between well-meaning, but sometimes insensitive, Jews, and sometimes resentful African-Americans during the middle of the twentieth century, particularly during 1964’s Freedom Summer.

Almost Friends will be loosely based on my experiences working as a volunteer civil rights lawyer in the South.

A: I’m glad I embarked on a second career, and I’m glad that I didn’t do it sooner!