Michael Scott is the author of the new book Ancient Worlds: A Global History of Antiquity. His other books include Delphi, and he has presented programs for National Geographic and the BBC, among others. He teaches classics and ancient history at the University of Warwick, and he lives in London.

Q: How did you come up with the concept for your new book, and how do you see the interconnections among people in the ancient world?

A: This book came about following a number of different research projects focused in the Mediterranean world, in all of which I kept coming up against the fact that to understand the Mediterranean properly, I had to look outside it.

I realised that looking at “world” with such artificial geographical boundaries simply was not helping me to understanding what really went on, how people thought and what the experience of that world really was like. 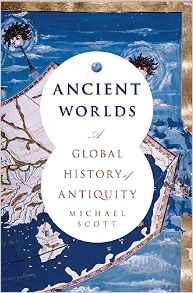 Hence ancient worlds was born. Interconnections were crucial to the way people lived and defined their sense of identity, as well as to their understanding of the world around them.

Q: You divide the book into three sections focusing on politics, war, and religion. How did you decide on the organization of the book?

A: This is the most difficult step with global history – how do you make the story manageable without creating your own artificial boundaries – either temporal or geographical.

To me, these three moments in time – end 6th century BC, 3-2nd century BCE and 4th century CE – seemed to me fascinating moments when all the parts of the ancient world was changing  - sometimes independently of one another and sometimes because of one another.

And those moments in time seemed to me to be about different things: politics, warfare and empire building, and religious change. 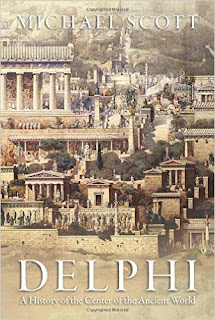 Q: What sort of research did you need to undertake to write this book, and was there anything that particularly surprised you?

A: You have to be prepared to immerse yourself in worlds you are not familiar with and take the time to understand them – both the ancient evidence, and the modern scholarly arguments. Then you need to start building the connections as you seem them.

What surprised me was how generous people were with their time in helping me to understand these worlds better. I engaged with scholars from around the world who were specialists in their different areas to help me make sure I had understood their individuals worlds properly and to get their reaction to my arguments and ideas. They were all really excited about the project and [gave] selflessly of their time.

Q: What lessons do you see from the ancient world that apply to relations among people and countries today?

A: To remember quite simply that interactions between cultures – whether it be migration, trade, war, or the movement of ideas – is nothing new. It has been essential to our human story from its very beginning.

A: I have just finished two new TV projects for the BBC in the UK – one a three-part series looking at the histories of Naples, Venice and Florence in Italy and another a two part series on the history of the island of Sicily from ancient to present day.

A: I am an honorary citizen of the town of Delphi in Greece – thanks to my earlier work on the famous oracle and sanctuary there – it was a place where people came to from all over the ancient world (the Mediterranean and beyond). You could say my interest in global history started then!