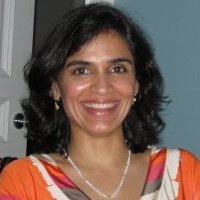 Mona Sehgal is the author of the new children's book Under the African Sky. She works for the U.S. Government Accountability Office, and she lives in Bethesda, Maryland.

Q: How did you come up with the idea for Under the African Sky and for your main character, Krishna?

A: I had been thinking about writing a children’s book for a while. I happened to go to South Africa, to Kruger National Park for a safari. I really loved the experience, and thought it was a great venue to have the story unfold.

I thought about the character…I would say most of my contact [with kids at that point] was with my nephews. They were my inspiration in wanting to write the story, about somebody like them!

Q: Did you need to do any research to write the book?

A: When I was on safari, my husband and I took a lot of guided tours. A lot of the characters are based on the people I encountered. The character Wonder, the character Oscar, the safari guide—they were all inspired by real people who had connections with nature. If you see a footprint that’s a little off, what could that mean? Those characters were drawn from the experience of being there. A: I ended up making a lot of changes. When I write it first, I wanted to have a magical experience, but I hadn’t developed what Krishna’s struggles were with himself.

What his struggles were, and what his experiences were outside him—I wanted to have a crescendo at the same time…Connecting the magic outside with what happens inside—that [was something] I stumbled upon.

Q: What age group do you think would especially enjoy the story?

A: Now I’m working on another imaginative adventure story. Since I wrote Under the African Sky, I had my daughter. I want the character of Krishna to be there, and I also want a strong girl character.

This one is more sophisticated for me as a writer. I have two characters in the lead. And there’s a little bit of time travel!

There is some continuity—the same character is showing up in a little more complexity. It’s about boys and girls. The adventure—I’m not sure if there will be a pirate, but it will have a flavor that’s different from Under the African Sky. The magic is very different.

What is similar is the openness to things that are different, and seeing the magic in that. Being aware of your surroundings. Things can become interesting very quickly if you’re imaginative and creative about it!

Q: Anything else we should know about Under the African Sky?

A: My hope was, I tried to have an Indian-American boy as a character, and what I wanted to do [was to say] this is a kid [whose experiences] are like a lot of other kids, but because of his heritage there’s something a little unique.

The difference he feels could be [felt by] any other ethnic group…If his name is a little different-sounding, it’s OK. It’s interesting to explore what’s behind that name.

It’s for a niche audience, but not really. There are so many different ways a child can feel different, and [this explores] how to make the difference a positive thing.