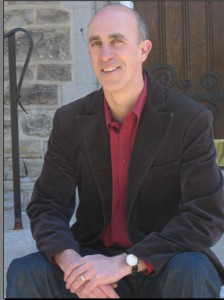 David Skuy is the author of Memoirs of a Sidekick, a new novel for kids. His other books for younger readers include Undergrounders and Striker. He is also a lawyer, and he lives in Toronto.

Q: How did you come up with the idea for Memoirs of a Sidekick?

A: I guess it started as a Don Quixote idea, but rather than telling it from Don Quixote’s perspective, tell it from Sancho Panza’s perspective. The book really changed and morphed. I probably rewrote it seven times. It took a long time to get a feel for the character.

At first, Boris was more like a caricature. It was “Boris Snodbuckle Saves the World.” The things he did weren’t really connected to school, it was like a bumbling series of events that led to him stopping a war.

He did different things in a different context, and slowly, Boris needed to become a real person. The Adrian character was pretty consistent. He stayed there. There was [always] the sidekick aspect.

Q: So can you say more about the idea of the sidekick? 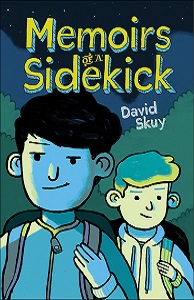 A: With Don Quixote, Sancho Panza was actually the wise, more insightful one, but doesn’t want the limelight. It doesn’t make him lesser, but it gives you self-evident license to make comments. That’s why I thought that style would work. In Don Quixote it was more snide.

With Adrian, [he first expresses] wide-eyed devotion, and he becomes more self-aware and less of a hero-worshipper. It’s more healthy.

Q: You’ve said you made many changes with this book. Do you usually work that way, or do you know how your books will end before you start writing them?

A: This one was unusual. Usually I’ll write it and revise it a couple of times, and it’s done, and then the editor will do their thing. This was first submitted to a publisher who rejected it, but was helpful…

With Boris, the original idea is that he’s tired of being picked on and wants to show he’s awesome—the Don Quixote idea. I didn’t want Boris to be a joke like Don Quixote.

What if he had a noble cause? Some of the things he had to do for it to be noble—instead of changing the world, he could change the school. It’s that slight change of focus that meant I had to rewrite 90 percent of it! 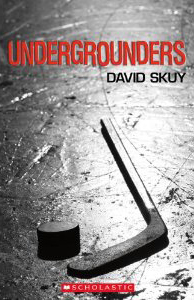 Q: It isn’t the case with this book, but many of your books deal with sports. How did you end up focusing on sports, and what do you see as the relationship between sports books and reading?

A: I wrote a couple of adult-oriented books that didn’t go anywhere. I went back to the cliché, Write what you know. I grew up reading sports series from the ‘40s and ‘50s, though I’m not that old—American series. I grew up playing hockey, and I knew the genre. Why not modernize it so it’s not so clichéd?

I didn’t even think of them as sports books, but books where the characters play sports. The first series I wrote was a hockey series. Then I wrote a soccer series because I grew up playing soccer.

Undergrounders is about a kid who plays hockey but I don’t think of it as about hockey. I just came up with the idea, and it wasn’t anything to do with sports…

A: I have a book coming out in the spring—I’m supposed to get the edits today. It’s a book for middle-grade, slightly older, about a boy at school who’s dealt with life by withdrawing from it so no one picks on him, and how he transforms his own life and the people around him through running. 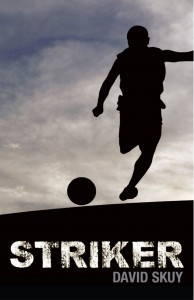 He’s overweight and self-conscious, and starts to run almost out of desperation. The book is tentatively called Run, but I want to change the title.

The other I worked on is The Band of Merry Kids. Robin Hood and Maid Marian—imagine if they had kids? I wrote it and submitted it, but [was told] kids of famous people are not so interesting, Percy Jackson notwithstanding. They don’t have problems people can relate to, other than you don’t live up to your parents.

I rewrote it so Robin Hood is there [but] the kids are not related to Robin Hood but motivated by the same spirit.

Now I’m working on another book.

Q: Anything else we should know about Memoirs of a Sidekick?

A: I guess for me it’s a book that kids can have fun with….My other books have humor in them but the action is serious. This one is more playful…[Readers] could have fun with it, but could relate to the journey these two characters have in their own lives.

There’s this idea of great stories needing to be retold. Don Quixote is timeless, and so is the idea of two people going out on an adventure, relying on each other, bumbling along—but their spirit comes through.