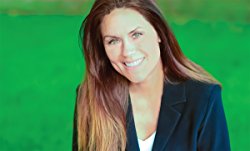 Leanna Conley is the author of the new book The Daily Janet, written with Dave Smitherman. The book is about her mother. A writer and performer, Conley has appeared on the Syfy Channel, Comedy Central, and other venues.

Q: Why did you decide to write about a book about your mother, and how did you pick the book's title?

A: I wrote the book because of the overwhelming amount of funny stories there are about my mom, Janet...and the title is because every day there's something hilarious coming from her. Plus, this is my way of handling the good and stressful about dealing with an elderly, willful parent as a baby boomer.

Q: How involved was she in the book's creation, and what does she think of it?

A: While she has total veto power over anything she doesn’t want in the book, it’s mainly my recollections of her...other than the fact she supplies the material!  What does she think of it? First reaction was, “You could do better.” - LOL! But she does like it - especially the fashion portions and chapter about her childhood sweetheart, David. 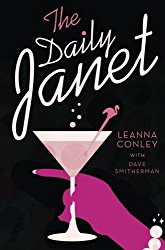 Q: How influential has she been in your life, and how would you describe the dynamic between the two of you?

A: My mom, Janet, has been very influential. I get my strengths from her, and she also acts as a cheerleader for me. But her diva perfectionism is difficult, not to mention the embarrassment she sometimes caused.

I guess our dynamic is a healthy dysfunctional. I’m now the parent to my little star. Another reason I wrote the book was as a catharsis, and to let the world know about her as a human being.

Q: Of the stories you tell about Janet in the book, do you have a particular favorite?

A: OMG – there are so many! Well, it’s her flying out of a moving Winnebago in a cat suit or calling Steve Forbes when he was a presidential candidate to urge him to get dermabrasion. She calls famous people all the time. I think she also was invited to the Trump Tower.  But my favorites change daily as they’re always coming!

A: More stories for The Daily Janet website, her YouTube channel, and pitching the book for TV and film. I have plans for a stand-up comedy one-person show that includes Janet lore, too.

A: I would love to have you visit the website and Facebook page, and order the book online, or ask for it at your local bookstore.