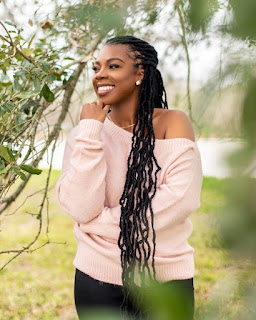 Beverly Gooden is the author of the new book Surviving: Why We Stay and How We Leave Abusive Relationships. She is the creator of the #WhyIStayed movement, and her work has appeared in a variety of publications, including The New York Times and The Washington Post. She lives in Houston.

Q: Why did you decide to write Surviving, and what impact did it have on you to write the book?

A: I started writing Surviving in 2016 and I initially wanted to write about how to get “unstuck” from toxic relationships, but over the years my goal changed.

Domestic violence is one of those issues that happens in hushed tones; people do not want to talk about it. Society doesn’t either. Yet there is so much to know and understand about it.

For instance, why do people stay in abusive relationships? Why don’t they just leave? What forms of relationship violence are most common? Are abusers inherently bad people? There are an infinite number of questions.

In writing Surviving, I wanted to explore the sociological aspects of abuse by grounding them in my own experience. I left an abusive marriage in 2010, one that was at times physically violent. But before that final exit, I knew exactly why it is so hard to leave abusive relationships because I was someone who stayed.

To write this book, I decided to be open about my experience to connect with people who made similar choices.

I know the volatility of being unhoused, I know hunger pains. I know the social services system and how brutal it can be to navigate. I know wanting to go back. I know believing they will change. And I also know moving on.

I know the divorce process and I know reinvention. I know constant job rejection because of resume gaps, and I know re-entering the chaotic dating world as a woman in her 30s. I know new life and new opportunities. I know home-buying and putting down roots. I know how to be alone.

I know hope! Because surviving is not an endgame; surviving is genesis. It is the start of a new life. And it can be hard to know how to navigate newness, especially after trauma.

Surviving centers my own ideas, but it also builds on the work of writers, researchers, and survivors before me because their important work helped me form my ideas.

Writing Surviving was hard because to write, I had to remember. And painful remembering is difficult. But along the writing way, and with the help of a few editors, I was able to focus on the purpose of Surviving and that made the path smoother.

Q: How did you create the #WhyIStayed movement, and did you expect it to gain the attention it did?

A: The #WhyIStayed movement was unintentional on my part. I was at work, scrolling through Twitter, and noticed that a media site had released a video of a football player punching his fiancé unconscious in an elevator.

At first, reactions were of anger toward him but quickly the reactions turned to his fiancé as news came out that they had since gotten married.

So, I’m sitting at my desk, knowing I had been in a comparable situation – I married my ex-husband well after he’d been violent. And I felt guilty in that moment. I felt shame from being someone who stayed with a violent partner.

And in a series of tweets, I spoke about the reasons why I stayed with my ex-husband. And then I closed Twitter and went to lunch.

When I returned after an hour, the hashtag was trending in the U.S. I had never asked anyone to join me in tweeting about abuse, never put out a call to action. Never posted “retweet this with your story.” Nothing.

Which speaks to the bravery of survivors who joined in tweeting that day, without even being asked to.

Back in 2014, social media virality wasn’t super manufacturable whereas now, marketers can try and plan for a viral post. We understand algorithms and user behavior much better now than we did back then.

So no, I never expected the hashtag to get attention, particularly because I didn’t have many followers. 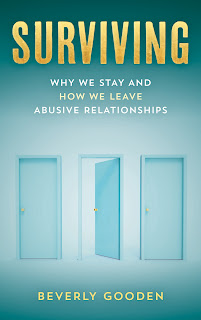 When it did get attention, I was amazed at how open and vulnerable survivors of relationship violence were being. Because it is risky to open up like that on social media. The moment was so impactful. I still think about those tweets from the first few days.

Q: The Booklist review of the book says, in part, “[Gooden] also centers her experience as a Black woman, highlighting the struggles unique to survivors with intersecting identities and providing a perspective often left out of the domestic-violence conversation.” What do you think of that assessment?

A: There was a man named Anthony Sowell who lived in my hometown of Cleveland, Ohio. He was soft-spoken, lived alone, didn’t bother anyone. But there was a strange stench hovering over the street where his house stood.

Black women would visit his home on the east side of Cleveland, and never be seen again. For years, their families called law enforcement about those Black women but there was no widespread investigation.

In 2009, a woman escaped his home after being sexually assaulted and begged the police to investigate him. At his home they found the remains of 11 people – all Black women – inside and outside of the property.

I have a chapter in Surviving titled “No One is Going to Save You” and it is specifically about being a Black woman experiencing violence.

I wanted to tell the story of how it feels knowing that no one would come and save you. There would be no massive search, no TikTok sleuths. That you are not the type of person who gets saved in this country.

I wanted to write about how it feels knowing that you are going to have to save yourself because not every survivor experiences violence, escape, and relief the same way.

A: At its core, Surviving is a story of reinvention. A lot of times we get the story of abuse and escape, but not what happens after.

I wanted to write about all three, with an emphasis on life after abuse - moving on, housing, what healing looks like for me, dating again, and my dreams for the future.

From the day I met my ex-husband until well after I left, I was constantly reinventing my life. And it was hard, but not impossible.

One of my goals is to explain social issues through storytelling. I want others to know why survivors stay in abusive relationships and what it takes to get out of them.

I want readers to finish this book feeling hopeful; open to thinking about survivorship as a unique triumph and not a shameful experience.

A: Right now, I’m getting a lot of rest. I work full time, so I’m balancing book and job responsibilities while still enjoying free time on weekends. I’ve taken up painting in an abstract painting class at a local art school.

Advocacy related, I am working on writing what I call the “Shelter for All” act, which by virtue of its name, would require and fund housing solutions for all survivors of domestic violence for a period no less than one year, and regardless of marital status or gender identity.

I also advocate for increased pay for those who work in domestic violence services as well as an investment in training and extended paid time off to recharge.

A: I don’t believe there are safe spaces. There are only spaces; the safety of which is external and out of our control.

What then, do we do with the understanding that most things are outside of our control? That is the key.

How do we handle harm? How do we find peace and resolve? How do we design our lives for maximum pleasure? What must be done to secure as much physical security as possible? How do we engage the world with empathy and gentleness?

I have a lot of personal influences in life and art, which writing is. My grandmother, Ella, is at the top of that list. I write about her in the book but in short, she loved me in a way that made me feel unstoppable. I owe my self-confidence to her.

A few other personal influences are my brother, the women in my family, Tina Turner, Frida Kahlo, and Octavia Butler. In art and words, adrienne maree brown, Nina Chanel Abney, Tayari Jones, and Toni Cade Bambara.