Kelly Leigh Miller is the author of the new children's picture book I Love My Fur!. Her other books include I Love My Fangs!. She lives in Chicago.

Q: What inspired you to create I Love My Fur?

A: Originally I wanted to do a story about a kid’s first haircut and the refusal to get it cut. When I wrote it though, there seemed to be something missing so I tried to think more about what are other reasons that a kid might not get his haircut.

The more I played with the story, the less it became about even getting his haircut and the more it became about my character’s relationship with his hair and how much he loves it.

Q: The Kirkus Review of the book calls it "A good conversation starter about looking beyond ego." What do you think of that, and what do you hope kids take away from the story?

A: I like that! I think everyone naturally wants to share the things they’re interested in with their friends, but some forget that sharing goes both ways, which means sometimes your friend wants you to listen to them about their interests and the things they want to share. I was hoping to achieve that with this book. 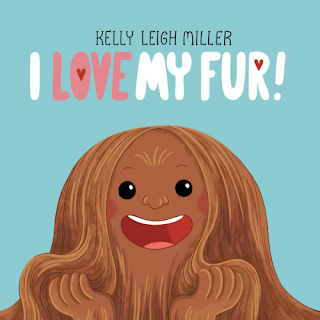 Q: In our previous interview, you said you worked on the text and illustrations simultaneously for I Love My Fangs. Was that the case with this book too?

A: Yes, I did the same for I Love My Fur. I wanted the words to work with the illustrations in a similar way to I Love My Fangs since it’s a sequel. The easiest way I found was to approach the writing in the book the same way.

Q: What first got you interested in creating children's picture books?

A: The illustrations, actually! I love children’s book illustrations and how a lot of the storytelling is told through pictures.

A: I’m currently working on a few secret pitches and picture books!

A: I have another picture book coming out August 31 called Time To Recharge, Harper!. It’s about a little robot who finds recharging boring because he can’t do all of the fun things in the classroom while he’s plugged in so he decides to skip recharging.