Penny Haw is the author of the new novel The Wilderness Between Us. Her other work includes the children's book Nicko, The Tale of a Vervet Monkey on an AfricanFarm. A longtime journalist, she is based near Cape Town, South Africa.

Q: You’ve said that your novel was inspired by a camping trip you took. How did you create your characters Clare and Faye?

A: Faye is among the group of closely-knit friends on the hike and Clare is the daughter one of those friends, who joins them at the last minute when her mother can’t make it. Faye and Clare are thrown together when floods separate them from the others. They’ve known one another for years but aren’t particularly close.

I wanted to have two women from different generations, each wrestling with their own problems, brought together under difficult circumstances.

Clare has anorexia. Faye finally acknowledges how toxic her marriage is and sees that she’s lost touch with who she was as a result. She’s allowed herself to exist in the shadow of her husband and, after years of being bullied, has forgotten her strength. Clare and Faye are deeply ashamed of their individual predicaments.

I was anorexic in my late teens and Clare’s experience of the condition is loosely based on my own. I wanted her to quickly learn what took me decades to discover and liked the idea of her learning that in the wilderness with an older woman who simultaneously finds her own path to healing. Of course, not everything goes to plan.

Q: The novel is set in South Africa's Tsitsikamma region. How important is setting to you in your writing?

A: The Tsitsikamma area is a combination of mountain fynbos (a distinctive type of vegetation found only in parts of South Africa), grass plateaus, deep and thick indigenous forests, steep ravines and riverways, and some overgrown commercial plantations. It is diverse, magnificent and a great backdrop for a story. 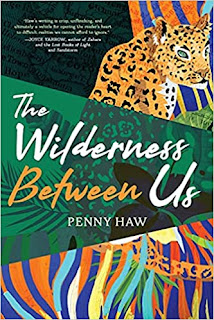 Add to that my love for animals and nature at large, and how being in the wild and with animals soothes and restores me, and I was set to write the novel.

[Setting is] crucial. The area was one of the things that inspired me to write The Wilderness Between Us. I’m moved by places, particularly unspoiled countryside. I grew up on a farm here in South Africa and no doubt that has played a part in it. I’ve also done a fair amount of travel writing as a journalist and enjoy describing places and my experience of them.

Then there’s the impact of location on the psyche, which emerges in most of most of my writing. The places people choose to visit and how they respond to their surroundings says a great deal about them. It adds an interesting dimension to their characters and stories—and when there are animals, birds, and other critters there too, the bar is raised.

A: I didn’t know exactly how it would end when I began, but once I’d finished the first draft, it was decided and didn’t change much.

That said, there was a tiny tweak quite far down the publishing line, which I made when I accepted that a certain action—however intriguing—wasn’t in keeping with one of the character’s personalities.

Before I wrote a novel, I was amused by authors who said things like “the characters led me,” but now I get it. In this case, the character complained bitterly about what I suggested she’d done, and I changed it accordingly.

A: I have several things on the go but am rather occupied with pre-launch activities for The Wilderness Between Us, which will be released on July 31.

I have two other completed manuscripts at various points in the publishing pipeline and am hoping that they will find their way to readers soon. One is a work of historical fiction, which tells the story of an extraordinary woman and her work with animals. I am particularly excited about it and hope to be able to share more soon.

A: I’d been a journalist for more than three decades before I plucked up the courage to write a book. There was something terrifying about the idea. It’s all writing but reporting and creating fiction are very different.

My first, Nicko, The Tale of a Vervet Monkey on an African Farm, is a children’s chapter book. I think of it as my gateway to authordom as it gave me the courage to get serious about writing novels, which I am now thoroughly enjoying. It’s particularly exciting to be learning how to do something new.

Thanks very much for your interest and for hosting me on your site.