Debra Bokur is the author of the new novel The Bone Field. It's the second in her Dark Paradise Mystery series that began with The Fire Thief. Her work has appeared in a variety of publications, including National Geographic Traveler and Islands.

Q: This is your second novel about your character Kali Mahoe. How do you think she's changed from one book to the next?

A: Through the series, Kali is stepping more firmly into her role as a detective, and slowly coming to terms with the loss of her fiancé, a fellow police detective. She’s learning to accept the things she has no control over, which includes helping her fiancé’s teenage daughter, who has a debilitating drug addiction.

Kali’s tentatively opening herself to new possibilities, and exploring her own heritage and her individual role within it. My hope is that readers will become invested in both her personal and professional journeys, and the challenges she overcomes along the way.

Q: The novels take place in Hawaii--how important is setting to you in your writing?

A: It’s vital. When I pick up a book to read, one of the most important elements I look for is how far away it can transport me from my day-to-day. As a writer, it was essential to me to create a place that would provide a portal for others to escape through, and to experience, for at least a time, another place or way of life.

Also, for many people, Hawaii is a dream destination that they may or may not ever travel to—and I hope to give those readers a small taste of Hawaii’s powerful landscape and beauty.

Q: What inspired the plot of The Bone Field, and what do you hope readers take away from the story? 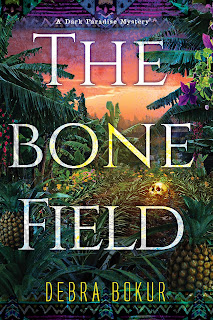 A: In The Bone Field, the discovery of a headless corpse left in an old refrigerator in an abandoned pineapple field leads Kali on the trail of an ancient legend and a killer who may have ties to a disbanded religious cult.

I’ve always been fascinated with legends—and with cults; in particular, what it is that drives people to follow a person or specific doctrine, even if it’s likely to be to their own detriment.

After watching a number of documentaries profiling various cult leaders, I recognize that one of the most powerful aspects of these individuals is their charismatic quality. I wanted to play with that idea while creating the characters for this story.

A: The only things I’m ever sure of when I begin a book is what the inciting incident will be, and how the mystery will eventually be resolved.

I write the first and last chapters before anything else, and though I have a pretty good idea of plot points or events that will unfold along the way, the middle part is a kind of adventure that I get to embark upon each day when I sit down to write.

There are a lot of surprises for me that happen between that first chapter and the last, and I’m learning to trust my characters to direct me in that space.

A: I’ve just turned in the manuscript for the third book in this series, so I’m preparing for edits.

In this book, the body of a young woman is discovered hanging from a tree in a heavily forested area of Maui, and all signs point to sorcery. Kali’s on a wild ride connecting the dots between a witch, a marine mining center, a few angry academics, and an out-of-control methamphetamine problem that’s negatively affecting the tranquility of Maui.

A: I spent a decade as an editor at a literary journal, and a lot of my poetry and short fiction has been published in literary publications—but I started out as a newspaper editor and moved on to magazine journalism. That’s where I’ve spent the bulk of my career. I enjoy research, so delving into the myths, lore and legends of Hawaii for this mystery series has been tremendous fun.