Susanne Paola Antonetta is the author of the new book The Terrible Unlikelihood of Our Being Here. Her other books include the novel Entangled Objects. She is the editor of the Bellingham Review, and she lives in Bellingham, Washington.

Q: What inspired you to write The Terrible Unlikelihood of Our Being Here?

A: Most immediately, it started when my family lost these little properties we had on Barnegat Bay in New Jersey. My grandfather built them, and they were somewhere between summer bungalows and shacks.

He was not a builder! But he was from Barbados and Bajans have a real DIY nature. We had no hot water or phone line, and minimal electricity. In the summers, my family gathered there. They were tiny places; we kids would sleep rolled up in big groups. It was a tremendously important place for me, then we lost it all in 2012 to Hurricane Sandy.

I’d spent much time with my grandmother there, and she was such an influence—a strong woman, both a Christian Scientist and a woman fascinated by spiritualism. She swam nude and held seances and taught me so much about never dismissing any question, even if it seems outrageous. I tried in this book to do that—never dismiss any question.

A: The Terrible Unlikelihood of Our Being Here as a title has so many connections to this book! When I realized that was the right title, I kind of fell in love with it.

In one way it refers to the terrible unlikelihood of me specifically being here, after overdoses, after the kind of thing my teenage drug use led me into—I tell the story of a time some friends and I literally drove into a tree and did not have enough consciousness to understand why the car had stopped.

So that’s a personal sense of the title. But it also refers to the side of the book that goes into larger questions, the questions about the value of existence, its improbability, the mind. 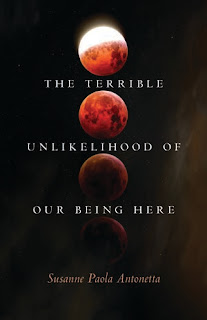 I don’t need to bore you with every detail (and I don’t in the book). I did want to celebrate this great improbable thing we’re a part of. Which is life and the world we live it in.

A: Wow, so many things surprised me! One of my projects, given my grandmother’s interest in spiritualism, was to test how real psychic experiences might be.

Most of the psychics I visited clearly didn’t have a handle on anything that wasn’t guessable. But one was just remarkably accurate. She told me things that had happened within the last couple of days in my immediate family that no one knew yet.

Another thing I’ll mention is the work of a physicist named Julian Barbour. He describes time passing as an illusion, and time as something always existent, an endless series of Nows. I did an interview with CNN about this aspect of time, and covid. It feels so real to the way we’ve been living. And it is comforting in a lot of ways. The universe doesn’t waste.

It also surprised me that consciousness itself is such a puzzle to many scientists. There is no clear explanation for why we think. I’m bipolar so I am interested in the mind, how it works. And how we can fall in love with this wonderful process going on in our heads. Maybe my celebration of the mind is partially creating an atmosphere that’s the opposite of stigma.

A: I found it transformative. I find when I talk to people there’s often a sense that we just shouldn’t look at those fundamental “why’s” and “how’s” of being alive. Is death real? Why are we here and does it matter, can we get some clues to that? It’s not weird, out-there speculation. It’s a way of understanding what we experience as humans.

A: I’m working on a book called The Devil’s Castle. It goes into psychiatric history—including its dark side—and the lives of two extraordinary individuals diagnosed with schizophrenia, Paul Schreber and Dorothea Buck.

Paul Schreber was a German judge hospitalized for life, who litigated his own release on the grounds that his experience was valid and had value.

Buck was a woman sterilized by the Nazis who became a psychiatric activist till she died at the age of 102. She called for a fundamental rethinking of what we believe about psychosis. I call for this too. Psychosis is a very human experience and has meaning.

A: I used to have what people call a photographic memory. I could read text off in my mind just as it appeared on the page. I didn’t try to do it. I never put a bookmark in a book or dogeared a page. Even years later, I would know just where I stopped. I began to lose all this extreme memory around age 50. I miss it.

And I spent much of the last months trying to create a sourdough starter, like everybody else. I have only failed!