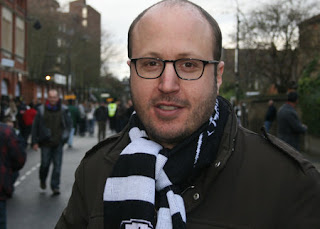 Roger Bennett is the author of the new book (Re)born in the USA: An Englishman's Love Letter to His Chosen Home. His other books include Men in Blazers Present Encyclopedia Blazertannica. He is a broadcaster, podcaster, and filmmaker, and cohost of the soccer TV show and podcast Men in Blazers. He grew up in Liverpool, UK, and lives in New York City.

A: I wrote most of the book during lockdown. A year of chaos for the United States which forced me, as a newly minted U.S. citizen, to dig deep into memories of an era when the United States felt very different.

As a Liverpudlian teen, looking on from across the ocean, the United States had appeared as a beacon of such courage, tenacity, and wonder that it changed everything I thought possible about the world and gave me the strength to chase those possibilities with the passion Tracy Chapman once sang about fast cars.

I wanted to re-create a portrait of this American idea, written in a spirit of the love, optimism, and gratitude I believe will prevail. I came of age with the Stars and Stripes and the Manhattan skyline painted as a mural on my bedroom wall and ended up moving here.

The act of becoming an American citizen is the single greatest achievement of my life. This book is that story. An American immigrant story.

A bit like the first half of Scarface or the last scene of Yentl. If Scarface had been as influenced as I was by Richard Scarry books, Hart to Hart, Love Boat, Fantasy Island, Miami Vice, John Cougar Mellencamp's Scarecrow, Pretty in Pink, the Super Bowl-winning Chicago Bears, Public Enemy, Beastie Boys, and, greatest of all, my Queen, Tracy Chapman.

The title came from my friend Courtney Holt. We are part of a non-profit record label together and he is so bloody good at naming things. It is his Superpower.

Q: You write, "I still believe the act of becoming an American citizen is the single greatest accomplishment of my life." Can you say more about that? 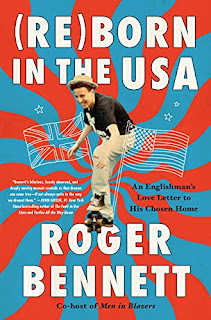 A: In a way, the whole book is an attempt to answer that question. I was a kid growing up in the murk of 1980s England at a time the nation felt like it was falling apart.

Back then, Liverpool was a place large on lore, low on quality of life. Economic decline had seen the docks fallen silent. The city spiraled, beset by the degrading forces of unemployment, poverty, and crime, like a British Baltimore without the steamed crabs upside.

I survived by inhaling everything American I could lay my hands on—the movies, television, music, books, clothes and occasional pair of knock-off Ray-Bans which made the United States my light in the darkness.

America existed almost as an alternate planet to me, a place filled with possibility and promise, where life seemed to be lived with a different gravitational pull. One that could not only sustain existence, but empower joy, hope, love and laughter, even if much of that laughter was clearly of the canned variety.

It impacted my identity so seismically and shaped who I was as a person. Even though I had never set foot in the United States.

The fact I not only live here now, but am an American citizen, married to a New Yorker, with four kids who all have American accents is something I never take for granted. It has been an incredible journey. There is not a morning I wake up in New York City without feeling an immense sense of gratitude.

Q: The author Nora McInerny described (Re)born in the USA as "A book that celebrates growing up, popular culture, and, the universality of needing to become the person you’re meant to be." What do you think of that description?

A: I love it. The blurbs process is such a weird, esoteric, frankly awkward process. I am not truly sure what it achieves, but it was very moving to read what people I respect have to say about a project I have poured my heart and soul into. Having Chuck Klosterman write such truly brilliant words was mind-blowingly surreal. His book Fargo Rock City was on my desk the whole time I wrote.

It has been especially wild to release a book about a love of America at the very moment America was tearing itself apart during the Covid chaos, Black Lives Matter demonstrations, and the 2020 election. There were moments that I thought the only people who would want to hear me talk about loving America would be One American News Network and Newsmax.

So, when I received the magical Mina Kimes’ blurb, I found it very validating. Mina wrote that the book “reminds us not only of what it means to pursue the American dream, but what that dream should—and still can—represent." Amen.

My book was inspired by Langston Hughes’ lines:

The land that never has been yet—

And yet must be”

A: Right this very second I am watching Chelsea play a football match with one eye while I polish a script for the next Men In Blazers show with JJ Watt, and intermittently trying to finish a fine cut of a Second World War project we are launching this fall. I have 23 tabs open on my browser which tells you a lot about how I work.

A: Three moments changed the course of my life:

Meeting William “Refrigerator” Perry in the middle of the night at O’Hare airport. The advice he gave me filled me with confidence when that was a quality in short supply.

The Beastie Boys concert which turned into a riot in Liverpool in 1987. A moment that made me realize I had to leave my hometown.

Watching Tracy Chapman play the Mandela Birthday celebration at Wembley in 1988 made me decide I had to summon the confidence to move to America. Tracy silenced a stadium filled with 72,000 confused, drunk English fans by standing there, being herself, and singing her truth. I still watch this performance any time I need to bolster my own courage.