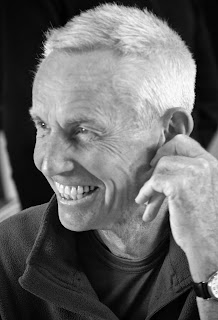 Graham Hurley is the author of the new novel Last Flight to Stalingrad, the fifth in his Spoils of War series, which began with Finisterre. He spent many years making TV documentaries, and he lives in Exmouth, UK.

Q: What inspired you to write Last Flight to Stalingrad, and how did you create your character Werner Nehmann?

A: Like many of my generation, I’ve always presumed that the Western Allies—chiefly the U.S. and Great Britain—deserve the lion’s share of the credit for winning the Second World War.

But as the series developed, and my reading deepened, I realised that it was the Soviet Union which absorbed body blow after body blow, shed most blood, and finally chased Hitler’s broken armies back to Berlin.

Stalingrad was as deep as the German dagger ever plunged into the body of the Soviet Union. Stalin himself ordered the city to be defended at whatever cost, and after five months of unimaginable violence, an entire German army was forced to surrender.

That was the moment that changed the fortunes of war, and sooner or later I knew my series had to reflect that. But how?

The answer was Werner Nehmann. This is a native Georgian, born Mikhail Magalashvili, a diminutive chameleon figure—wholly fictitious—whose boundless journalistic talents have come to the attention of Nazi Minister of Propaganda, Joseph Goebbels.

The two men have much in common. They share, above all, an absolute disregard for the truth. No lie is too big—or too small—not to be deployed for the greater glory of the Thousand Year Reich, and as the Nazi boot descends on most of continental Europe, they exult in the sheer reach of carefully-seeded propaganda. There’s no crime, in short, that either man won’t commit in the name of the Fuhrer.

My novel, at this point, was still locked inside my head. I knew a great deal about Joseph Goebbels. I’d read countless books about Operation Barbarossa, the invasion of the Soviet Union, and the tally of conquests that led to the killing fields of Stalingrad. But I’d yet to get a firm fix on Werner Nehmann.

Then came the moment when my wife and I found ourselves sharing an ancient railway compartment in the middle of Georgia with a lean figure in jeans and a Tbilisi Dinamo soccer top.

He didn’t speak much English, and he was carrying his only possessions in an Aldi supermarket bag, but it turned out he’d just been released from a nine-year jail sentence for committing a double murder. 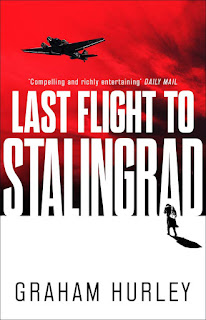 Both of them he blamed on a long overdue settling of family debts in the lawless Caucasian town of Svaneti, and six hours of patient conversation before we arrived in Tbilisi told me I’d found my Werner Nehmann.

A: Research, for a series like this, is absolutely key to everything that follows. You have to acquire a historian’s grasp of the sheer sweep and scale of the war—what happened to whom in which order—and then you have to imagine yourself into tiny pockets of that conflict that have caught your interest.

This is no small undertaking but I’ve been in love with books since I was a kid and to see my office table disappearing under mountains of reading as the series developed has been a huge pleasure.

Many of them marked key anniversaries in this same war (think Dunkirk, think D-Day), and in-depth conversations with veterans from both sides of the conflict taught me a great deal about the scars that the experience of battle leaves on the men who fight them.

My last TV commission happened to be a series of six films exploring aspects of the Falklands War, when a UK Task Force sailed into the South Atlantic to reclaim British territory seized by the Argentinians. This was a conflict that post-dated the Second World War by nearly 40 years, yet time and again I was struck by the ageless impact of the battlefield.

No matter how gruelling or realistic the long years of training, nothing seems to prepare a man for the real thing. Extreme violence, that murderous combination of high explosive and savage intent, troubles the fighting soldier at the deepest level.

My grandfather fought in the trenches in the First World War. My father flew in Beaufighters over North Africa. Both saw years of active service. Yet neither of them would ever talk about it. Why not? Because combat can destroy a man without leaving the slightest evidence of physical damage.

Exploring and understanding that process sometimes falls to the writer. Hence Werner Nehmann’s fictional journey to the Golgotha that was Stalingrad.

Q: What do you see as the right blend of history and fiction in your novels?

A: This is maybe the trickiest balance of all for the writer who needs to juggle authenticity against the narrative freedoms embodied in fictional characters.

Get Joseph Goebbels right—the way he talks, the risks he takes, the tricks he uses to overcome physical disability and rise to the very top of Hitler’s Reich—and it becomes possible to establish a sense of near intimacy with a historical figure of real importance, an effect that definitely matters on the page.

At the same time, I’ve been much struck by how lonely many of these people must have been. In the upper reaches of the Wilhelmstrasse, you were wise to trust no one. Even your wife or your mistress might betray you.

And thus I sensed real potential in a rapport between someone as powerful as Joseph Goebbels and a gifted nomad like Werner Nehmann. To their mutual surprise, and Nehmann’s delight, they turn out to have much in common. Yet the very warmth of this strange relationship turns out to carry the seeds of its own destruction.

Q: This is the fifth in your Spoils of War series. Do they need to be read in order?

A: Happily not. When I and Nic Cheetham, my publisher, first met, we agreed that the series need not revolve around a single character. I’d done this for far too long in my cri-fi books, and I felt it limited too many possibilities.

So instead we settled on a narrative device we called “soft-linkage,” which allowed different characters—British, German, American, Russian—to come and go, sometimes centre stage, sometimes not, depending on the demands of the plot.

Written this way, a series can become a rich soup of recurring characters, offering the reader familiar faces with the constant promise of surprise outcomes.

We also had a meeting of minds about chronology. Finisterre, the launch title, takes place towards the war’s end. Aurore begins in the Thirties. Estocada, Book Three, explores the pre-war crisis in the Sudetenland. And you can read them in whichever order takes your fancy.

A: Just now, I’m sharing my working days with a vast pile of reading which will become the bedrock for Book Eight. Kyiv, Book Six, will publish in the UK in July, while Katastrophe, Book Seven, arrives next year. Thanks to lockdown, both these times are readied and waiting.

Working title for Book Eight? Jubilate. Subject? One of the biggest stains on the British wartime record.

A: Yes. That history, alas, is constantly in the process of repeating itself. A not entirely reassuring prospect.