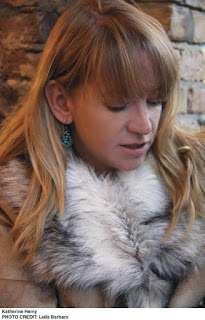 Katherine Heiny is the author of the new novel Early Morning Riser. It takes place in Boyne City, Michigan, and features a cast of characters including Jane, a teacher, and Duncan, her husband. Heiny's other books include the novel Standard Deviation. She lives in Bethesda, Maryland.

Q: In an interview in Seen magazine, you said you started on a novel that also featured your character Duncan but eventually turned to this novel instead. Will you return to that manuscript or involve Duncan in other future works?

A: I think I’ll return to that novel, but not with Duncan in it. I want to think of him as living in Boyne City with Jane forever.

A: There’s a TED talk that my sons showed me about how video games are actually good preparation for life because they teach you that to get to the next level, you have go through a lot of ups and downs and obstacles and assassins and villains and stuff. 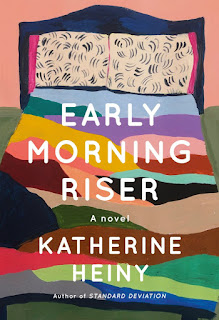 I wasn’t fully persuaded that video games teach you life skills, but I do think that Jane learns to deal with a lot of obstacles on her way to what she wants, and that her life is richer for it. I hope readers can reach the same conclusion.

A: I’m working on a story collection and the story I’m writing now is about some teenagers who agree to play strip poker with their youth minister. I love to write about teenagers, although maybe that just shows my basic immaturity.

A: Near the end of Early Morning Riser, Jane takes her class on a field trip and everything that happens there happened to me on field trips I ever went on as a parent-chaperone – although not all on the same trip, thank God. It was not a lot of fun to live through but definitely a lot of fun to write about.