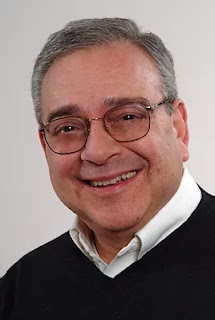 Norman H. Finkelstein is the author of The Shelter and the Fence: When 982 Holocaust Refugees Found Safe Haven in America, a new middle grade book for kids. It focuses on a group of refugees who took shelter at Fort Ontario in New York State in 1944. Finkelstein's many other books include Union Made.

Q: What inspired you to write The Shelter and the Fence?

A: I actually knew a bit about the Shelter through my teaching of courses on the Holocaust and even mention it briefly in several previous books.

The idea for the book actually came two years ago when a friend in Oswego wrote inviting me to the 75th reunion of Shelter survivors. I spent two wonderful days there listening to stories from survivors and their families and filling in holes that I never knew about the whole story.

It was a grand event. Seventeen of the survivors were there and a host of dignitaries. The city went all out. As my wife and I were sitting in a tent overlooking Lake Ontario listening to the speeches I nudged her and whispered, "Next book!"

A: To be perfectly honest, it was not the title I originally proposed. My choice was Inside the Golden Cage, taken from a musical play the refugees created during their last days at the Shelter.

My editor suggested the current title which I think more aptly describes the situation faced by the refugees. I always trust my publishers to make the right decisions. 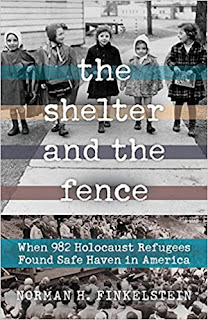 Q: How would you describe the experience these refugees had once they arrived in the United States, and what happened to them once the war ended?

A: Their experiences in the United States were limited. By regulation they could not travel outside of Oswego, New York, and that made them feel really confined. Many had relatives here but the refugees could not visit them. One boy was accepted to Harvard Medical School but could not go to Massachusetts. Before boarding the ship in Italy they signed a formal document stating that when the war ended they would be returned to their homelands.

Life at the Shelter was pleasant. Food was bountiful and outside agencies provided niceties the government did not. They could go into the city for six hours a day and that brought them into contact with local residents, shops, the public library, and restaurants.

Particularly interesting was the way school-aged kids were treated in the local public schools. For some who had never been to school this was a welcome opportunity. Young people beyond high school age could attend classes at the Oswego State Teachers College (today SUNY Oswego).

When the war did end in 1945 the question of their futures loomed large. They did not have any homes to return to and their friends and relatives in Europe were dead.

President Truman realized this and cleverly devised a way for the refugees to obtain visas and become Americans. By February 1946, the Shelter was closed and the refugees scattered around the country to begin their new lives as Americans.

A: There are wonderful oral histories through the United States Holocaust Memorial Museum and the Penfield Library at SUNY Oswego. Also, the Safe Haven Museum in Oswego published several very valuable books which included recollections and memoirs.

Also, in 1944, a congressional hearing was held at the Shelter to help determine the future of the refugees. The testimonies included in the Hearing document were particularly valuable. Also, contemporary newspaper articles were of great help.

I was particularly surprised by two things. First, the way the public schools bent over backward to welcome refugee children. Second, by the strength of the refugees themselves as they fled throughout Europe to find refuge in Italy and then embark on the trip to Oswego not knowing what their futures held.

A: Two books. The first is a picture book biography of Abraham Cahan, founder and longtime editor of the Yiddish language newspaper, the Jewish Daily Forward. It will be published by Holiday House in 2023.

The second is a young adult/general reader look at antisemitism in the United States to be published by the Jewish Publication Society also in 2023. (Which means I am a very busy author with a due date looming in early 2022.)

A: The Shelter and the Fence is a Holocaust story no one knows but should. Although 982 people were brought to America, 6 million more perished in Europe. But for those 982, this was a lifesaving and altering experience. Sadly it was too little and too late for others.