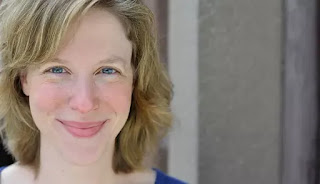 Julie Sternberg is the author of Summer of Stolen Secrets, a new middle grade novel for kids. Her other books include Everything's Changed. She grew up in Baton Rouge, Louisiana, and now lives in Brooklyn.

Q: You've noted that Summer of Stolen Secrets was based on your own family's experiences--how did you create your character Cat?

A: When I was growing up, my family owned a department store on Main Street in Baton Rouge, Louisiana. My grandparents bought it with the savings they’d smuggled out of Nazi Germany.

The main character in Summer of Stolen Secrets, thirteen-year-old Cat, likewise is part of a family that owns a department store in Baton Rouge and has roots in Nazi Germany.

I had trouble writing early drafts because Cat was too much like me; I couldn’t get enough distance to allow the story to feel fresh and surprising. It was only when I decided on key differences that the book started working.

Instead of growing up in Louisiana with the rest of her extended family, Cat’s from New York. Everything about Baton Rouge and the store feels new to her.

Cat’s branch of the family has also long ago cut all ties with her sly, tough, and secretive Baton Rouge grandmother. So Cat is fascinated by her grandmother and needs to figure her out in order to heal the family. Once these kinds of details were in place, Cat started coming to life. 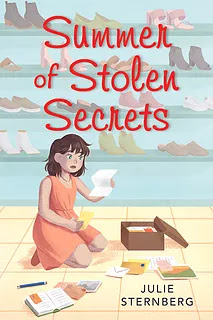 Q: As you’ve noted, the novel is set in Baton Rouge--how important is setting to you in your writing?

A: I have to see a scene fully in my head and transfer that image to the page before it starts to feel real, so setting is key.

Conveying setting in Summer of Stolen Secrets was particularly fun because I got to contrast Baton Rouge with Manhattan, where the opening scenes take place. The cities are so different—everything from the height of the buildings to the hum of mosquitos in the air to the pace of living.

Description doesn’t come easily to me, so I dread writing setting, but a story is deeply affected by where you place it.

Q: Why did you decide to tell the story as a letter from Cat to her grandmother?

A: I can’t move forward in a book until the voice feels right. That means knowing not just who’s telling the story but also who they’re telling it to. If I describe the same moment to three different people—my young daughter, my best friend, and a colleague I don’t like, for example—the story’s going to come out three different ways.

As I was drafting Summer of Stolen Secrets, the voice started to feel more layered—there were opportunities for anger, irritation, humor, sadness—when I imagined Cat communicating with her grandmother.

A: I shy away from takeaways. I’m always concerned that if I set out to impart a message in a book, the writing will feel heavy-handed and off-putting to the kids who read it.

Often I have guiding questions for myself--in this case, questions like, what lingering effects can a traumatic past have on future generations? Why might a grandmother be least kind to the people she is supposed to love most? How might families break apart and how might they heal?

I explore those as I write, but I don’t necessarily find clear answers. Ultimately my hope is that when kids read Summer of Stolen Secrets, they feel lost in a book that they enjoy and can connect with in some way.

A: I’m working on a thriller, which is a real departure for me. It’s possible it’ll turn out to be nothing more than quarantine-driven madness. We’ll see how it goes.

A: I’ve long wanted to write a book about the people and places that haunt me from my childhood. It’s such a rich starting place for stories: what are the images, moments, connections, and complexities that won’t leave you alone, and why?

I spent years thinking through how I might turn mine into a middle-grade novel. I’m so glad Summer of Stolen Secrets has finally made its way into the world, and I hope readers find it half as rewarding to read as I found it to write.