Julie Sternberg is the author of the new children's novel Everything's Changed and the new picture book Puppy, Puppy, Puppy. Her other books for kids include Bedtime at Bessie and Lil's and Secrets Out!. She is the co-creator of Play Memory, a resource for middle school teachers, and she lives in Brooklyn.

Q: Everything's Changed is your third book about your character Celie. How do you think she's changed over the course of the three books, and did you know you'd be writing a series from the beginning?

A: In the beginning I had no idea Celie would get a series. I just set out to write a story about a girl who hates change and is confronting quite a lot of it.

In the first book Celie’s best friend has stopped speaking to her; her sister is making decisions she doesn’t understand; and her grandmother has started behaving strangely. It was an unexpected treat to get to continue the story for two more books. 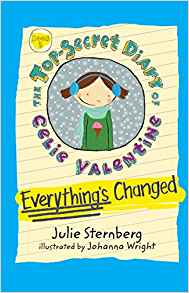 In the most recent installment, Celie is having to adjust to dramatic developments—a new apartment, a new school, new friends. She’s taking risks she never would have dreamed of when the series began.

She’s also learning, I think, that she will inevitably make mistakes; that her friends and family will, too; and that it’s important to forgive.

Q: Why did you decide to write this series in a diary format?

A: I didn’t start out using a diary format. I initially tried stringing together the different kinds of writings that can fill kids’ days—notes passed in class while the teacher isn’t looking, for example; texts with friends; homework assignments; family notes left on the kitchen table.

But the writings ended up feeling too spare and disjointed on their own. So my editor and I decided Celie could tape them into her diary and add context and depth with her journal entries.

Q: You also have a new picture book out this year, Puppy, Puppy, Puppy. What do you hope your young audience takes away from the story? 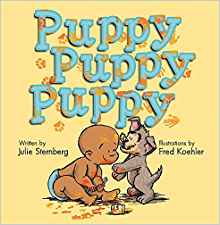 Q: What do you think Fred Koehler's illustrations add to the book?

A: The book is infinitely funnier, more poignant, and more alive because of Fred’s illustrations. One of the very best things about being a children’s book writer is getting to send words on a page to illustrators like Fred and then marveling at the visual worlds they create.

A: When I was growing up, my family owned a department store on Main Street in Baton Rouge, Louisiana. We were one of the relatively few Jewish families in town.

For a very long time I’ve wanted to use those details—department store, Jewish family, Southern town—as the backdrop for a children’s book. I’ve tried many versions; and I think I’ve finally come up with one that works, if I can finish it well. We’ll see!