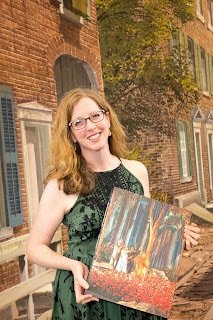 Karen Maness is the co-author of The Art of the Hollywood Backdrop, which looks at painted backdrops used in Hollywood films. She is the principal instructor of scenic art and figurative painting at the University of Texas at Austin's Department of Theatre & Dance, scenic art supervisor at Texas Performing Arts, and founder of Rust Red Studio in Austin, Texas.

A: Tom Walsh, then president of the ADG [Art Directors Guild], approached me with the idea after my presentation about the West Coast Scenic Artist at the USITT [U.S. Institute for Theatre Technology] national conference in 2012. My co-author Richard Isackes joined the project shortly thereafter.

A: The research was conducted through multiple academic and studio film archives, in addition to direct interviews with the scenic artists themselves with access to their private portfolios and historic collections.

The surprise to me was the caliber of the scenic art discovered in the extant collection of backdrops owned by JC Backings. The quality of execution, depth, color, value structure, visual texture, and efficiency of brushstroke was superior to any scenic art I had seen to that point. 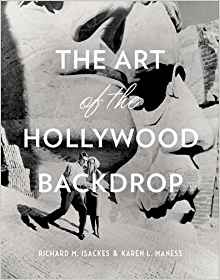 Q: What background did most of the artists have, and did they tend to spend most of their careers in Hollywood?

A: The skills and heritage of scenic art bloomed from the rich tradition of theatrical painting and found its way into the cinema. Many of the artists migrated from theatres into the scenic studios.

Skills were passed from generation to generation, master to apprentice. The Chouinard school which would become Cal Arts, proved to be a common educational thread in between multiple artists during the 1950s.

As the educational system in the United States shifted from traditional art skills training to exclusively conceptual work, artists were left to fend for themselves for technical art training, or seek out masters who were willing to share their knowledge.

Q: How much are the painted backdrops still used today, and what do you see looking ahead?

A: The painted backdrop is as relevant as ever; unfortunately it is being employed less frequently as film productions are moving to the faster, more flexible, and much heavier option of printing their backdrops. 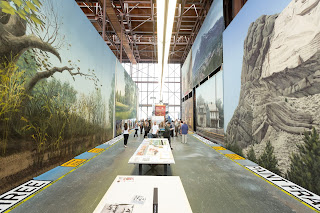 The expense of this choice is many layered. It has resulted in the rapid generational loss of the knowledge required to produce a painted backdrop. It has also resulted in overly high definition backgrounds which leap to the foreground, a common atmospheric perspective problem of the untrained artist.

These backdrops oftentimes suffer from linear perspective problems when the image is designed by a person without an understanding of the camera position and appropriate scale of the image in relationship to the built environment.

Another loss resulting from the scarcity of painted backdrops on set has been the knowledge of how to light them properly. Painted backings require much less light than backlit printed backings. As a result, when painted backings are used on set, they are often times flooded with light when lit by an inexperienced DP. 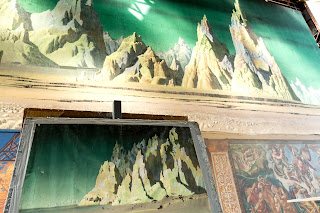 Fortunately, production designers are still commissioning backdrops to be painted for films to great effect, including Jess Gonchor for the Coen Brothers feature film Hail, Caesar! (2016) and for their upcoming new anthology series The Ballad of Buster Scruggs (2018). Nathan Crowley has also set teams of NY scenic artists to work on the upcoming Hugh Jackman film The Greatest Showman (2017).

A: An unprecedented collection of historic Hollywood motion picture backings has been discovered and is in need of photography and preservation.

I will be working closely with the Art Directors Guild Archives and various supporting entities to photograph, archive and document the visual treasures of Hollywood’s scenic art history held within. 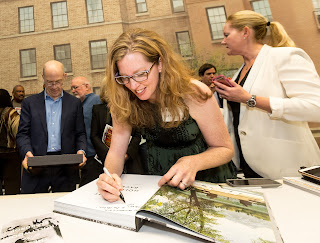 Additionally, I have begun the early stages of a project focusing on pioneer art director and master scenic artist Ben Carré. This fall I return to teach at UT Austin while preparing for multiple exhibitions of my contemporary figurative and landscape paintings.

A: There is an exhibition on display through August 12, 2017 at the Art Directors Guild Gallery 800 in North Hollywood, entitled “Scenic Art: Painting Through Time.” Every major artist featured in The Art of the Hollywood Backdrop has original art work on display.