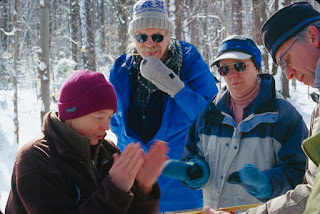 Linda J. Spielman is the author of the new book A Field Guide to Tracking Mammals in the Northeast. She is an environmental educator and expert on animal tracking, and she lives in upstate New York.

A: I do tracking workshops with participants from a variety of experience levels, and I have often seen how frustrated people become when the tracks they’re looking at don’t match the illustrations in their books.

Identifying animal tracks can be difficult, because the same animal can make tracks that vary greatly in appearance depending on how the animal was moving, what it stepped on, and what happened after the tracks were made.

I wanted a book that I could use as a resource in the field to help people in these confusing situations. The book I envisioned would be portable but would cover tracks in great detail, with lots of images showing not just “perfect” tracks but also tracks that had missing parts or whose shapes differed from the “normal” shapes.

There are plenty of tracking books out there, and some (I’m thinking especially of the ones by Paul Rezendes and Mark Elbroch) are excellent. But even these don’t really deal with track variations in the depth that I wished for.

I saw an unfilled niche, and (with support and encouragement from several of my trusted mentors) I felt that I could make a book that addressed that need. 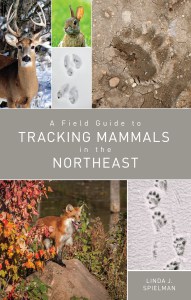 In my 20-plus years of photographing tracks I had documented lots of confusing variants, and I had been drawing tracks for nearly that long, so I felt equipped to delve into the quagmire of animal track variation. The geographic coverage was determined by my own tracking experience, which has been primarily in the northeastern U.S.

All of the northeastern mammals whose tracks are likely to be encountered appear in the book, but I didn’t include a few mammals which appear only rarely on the edges of the region.

Q: Who do you see as the perfect reader of this book, and what do you hope your readers take away from it?

A: The perfect reader is someone who is drawn to animal tracks, who is curious about the animals that live around us, and who is interested in what tracks can tell us about the natural world.

Beginners will get a jump start on looking more closely and gathering more information from tracks. More experienced trackers will discover (or rediscover) important details and perhaps embrace rather than resist the variation that makes tracking so challenging and fascinating.

And I hope that my book will contribute to an awareness of the beauty and complexity of tracks for practitioners of all levels of experience.

Q: What are a couple of your own most interesting moments as an animal tracker?

A: One winter day I was snowshoeing with my dog, following a snowmobile trail along a forest road. I was looking for tracks but not finding many.

We went for about an hour and then turned around and went back the way we had come. On the way back I was surprised to see a mink trail crossing ours. It crossed my snowshoe tracks without a break in its rhythm, but at my dog’s tracks its movements changed.

There were mink tracks (at a walk rather than the usual bound) going both directions along the dog’s trail. The mink had spent time investigating the dog’s tracks before continuing in the same direction it had originally been going.

Apparently people were no big deal to the mink, but the dog—which would have been less predictable than people—was much more alarming.

On another occasion I was following a path through a snow-covered meadow (the snowpack was several feet deep) with a few other people. We found several places where short-tailed weasel tracks crossed our trail.

Further investigation showed that all of the tracks were actually parts of a single trail made by one individual animal. The weasel trail coursed around and looped back on itself, and at one point disappeared down a small hole into the snowpack, only to reappear from another small hole nearby.

But after its emergence the trail was different: the weasel tracks went deeper into the snow and there were new marks alongside, slender lines that appeared at regular intervals. This pattern led down a slope, plunged into a hole in a deep snowdrift, and didn’t reappear anywhere in the vicinity.

What we had found was the trail of a hunting weasel. The animal had, in typical weasel fashion, bounded around making erratic turns and loops, listening and watching for signs of prey animals. It had finally detected an animal (probably a vole) beneath the snow, dived down, and emerged with the prey animal in its jaws.

It had then bounded down the slope holding its prize crosswise in its mouth, the tail of the dead creature hitting the snow out to the side each time the weasel landed. Where the trail went down into the snowdrift the weasel probably had descended to a safe refuge where it could eat its meal in warmth and safety.

In late winter I sometimes find the tracks of mated pairs of foxes or coyotes. This is always a treat, because the tracks are so expressive of the bond between the two animals. The trails may parallel each other or lie one on top of the other, and they may diverge and come back together repeatedly.

Q: You write, “We were all trackers once,” and you note that “the pendulum now swings back” toward more interest in tracking. What accounts for that increased interest, and what do you see looking ahead?

A: I think a number of factors have contributed to our increasing awareness of tracking as an important skill. The birth (or really rebirth) of the environmental movement is part of it, as well as our increasing need to escape to wild places from lives hemmed in by technology, schedules, and stress.

Credit should also be given to a few pivotal figures, among them Tom Brown and Louis Leibenberg, who helped to bring tracking back into the cultural mainstream.

A: With the appearance of my book, I’ve had many inquiries about tracking outings, so I’ll be scheduling several in the next months.

I’m also preparing a workshop on drawing and tracking (I’m calling it Draw Your Way to Tracking Wisdom). I’ll be presenting it at the Northeast Wildlife Trackers Conference in Massachusetts in October, and I’ll also be offering it to bookstores, nature centers, and libraries.

A: Some of the publicity for my book has stated or implied that it is the only book a person needs to become an accomplished tracker. That may be a good selling point, but it isn’t true.

Anyone who gets serious about tracking will want to know more about bites, chews, dens, scat, kill sites, and other sign, and will turn to the much more complete coverage and beautiful photographs in Paul Rezendes’ and Mark Elbroch’s books.

To improve their understanding of animal gaits, trackers will want to refer to books by Mark Elbroch, James Lowery, and David Moscowitz. For interpretation of tracks and trails, books by James Lowery, Jon Young, and David Brown are essential resources. And serious trackers will want to learn more about animal ecology and wildlife biology by delving into the extensive literature in these fields.

My book is intended to fill a specific niche in the tracking literature: it is a portable field guide that focuses primarily on tracks, with comprehensive coverage in both text and images of a wide selection of track variants. I hope it stands with the other books as an essential resource for aspiring and experienced trackers.