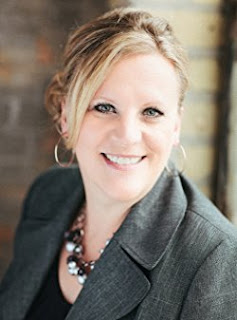 Carolyn Porter is the author of the new book Marcel's Letters: A Font and the Search for One Man's Fate. She is a graphic designer who designed the P22 Marcel Script typeface. She based it on the handwriting of a man named Marcel Heuzé, whose World War II story she discovered decades later. She lives in White Bear Lake, Minnesota.

Q: At what point in your research into Marcel’s life did you decide this would become a book?

A: When I began searching for information on Marcel—Who was he? Why had he been in Berlin during the depths of World War II? Why had his letters been for sale at a store in Stillwater, Minnesota? And the biggest question: did he survive?—I had no idea it would become a book! I searched for answers simply to satiate my own curiosity.

A few short months later, however, I learned about a snag. Complex legal issues needed to be resolved before I could publish the translated text of Marcel’s letters, and it took another year to secure the permissions I needed. During that time I finalized the font and processed aspects of the emotional journey I did not have time to process while the search was underway.

The font launched in early 2014; immediately after I turned my energy to telling the story of the development of the font and the search for information on Marcel’s fate. 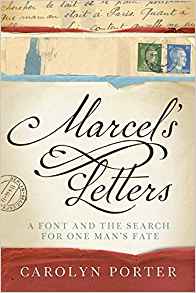 Q: What surprised you most as you searched for clues about Marcel and his family?

A: I thought I had a reasonable understanding of the human rights violations of World War II—the camps, specifically—but I quickly realized I only knew about extermination and concentration camps. Other types of camps existed, including labor camps, which is the type of camp where Marcel Heuzé was imprisoned. And I didn’t know a thing about French forced labor.

Even people with a deep understanding of World War II history have told me they had never heard of Service du Travail Obligatoire, the Vichy regime’s obligatory work service. To this day a complex legacy surrounds French forced labor; I understand how and why it has been become a footnote in World War II history.

Marcel’s original letters are remarkable in that they include passages that represent the best and the worst of humanity. In one paragraph he described hunger or seeking shelter in a bunker during an aerial bombing; in the next paragraph he expressed beautiful words of affection for his wife and three young daughters.

I was surprised Marcel could remain ever-hopeful he would return to France to be reunited with his beloved family. Having—or at least displaying—that kind of optimism was remarkable.

Q: What was the process for designing the P22 Marcel Script font?

A: I began by creating high-resolution scans of Marcel’s original handwritten letters. I identified favorite individual letters, then enlarged and traced those letters until I had assembled an entire alphabet. Those tracings were digitized, then ultimately transferred into FontLab, the software I used to craft the font. That’s the tidy two-sentence summary, anyway.

The truth is that the software is complex and there were times when weeks or months of work had to be discarded and re-done. A cursive script can be particularly challenging because every single letter combination must include a smooth connection between letters.

Once all the glyphs [the term for individual characters] were designed and tested, complex OpenType coding was needed. OpenType coding allows glyphs to change based on the surrounding glyphs; it’s one of the magical things that can give a font the kind of variability you find in actual handwriting.

Designing a font requires a balance of artistry and engineering, but I think the biggest skill a type designer needs is patience. Granted, I worked on the font evenings and weekends, and there were times months went by without any progress, but in total, the font took 12 years to complete.

Q: What do you hope readers take away from Marcel’s story, and how did writing the book affect you personally?

Each letter could have been Marcel’s last opportunity to tell his wife and daughters how much he treasured them. I try to keep that in my heart. And even though it’s not easy or natural for me, I am trying to be more emotionally expressive.

I hope readers are inspired to doggedly pursue whatever it is they are curious about. I love the Franz Kafka quote, “Follow your most intense obsessions mercilessly.”

A: I have talks and promotional events booked for Marcel’s Letters through next March; that’s keeping me busy. When I can find time, I’ve been working on my next font. It, too, is a connected cursive script based on old handwriting, but it looks nothing like the font based on Marcel’s writing.