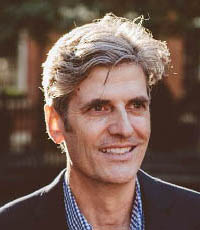 Stephen Savage is the author and illustrator of the new children's picture book Little Plane Learns to Write. His other books include Little Tug and The Mixed-Up Truck, and his editorial illustrations have appeared in a variety of publications, including The New York Times and The Washington Post. He teaches at the School of Visual Arts in Manhattan, and he lives in Brooklyn.

Q: How did you come up with the idea for Little Plane Learns to Write?

A: My agent suggested this idea. I had done other vehicle books with Roaring Brook. You start feeling like you’re in need of help in coming up with other ideas.

An airplane made sense; we already had a truck and a boat. My agent, Brenda Bowen, liked the idea of a plane that wrote. It gets the literacy element in. I tried other ideas and they didn’t work, and I went back to it. I tried a submarine, a trolley. It worked out nicely…

I can bounce things off of her. She headed Bowen Press at Harper Collins. She understands these books very well. We hatched these vehicle books together. When an agent or an editor has a vision, you follow it…

Q: Did the story come first, or the illustrations?

A: The story. I’m primarily an illustrator; I feel that’s my strong suit. The writing, I’ve had to bring up to the level of the illustrations. We all have writing skills—we’re trained as kids—but to write for a picture book is different, you’re writing more poetically, and it’s short.

I feel if you’re going to do both writing and illustrating, the writing comes first. For years, I was doing editorial illustration. It always starts with the text. I thought, I’ll illustrate it however the story demands. 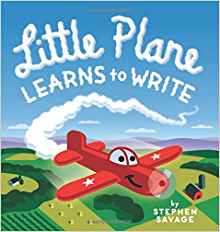 We tried a couple of different ways. My editor, Neal Porter, suggested a skywriter who couldn’t get the letters to write. The idea Neal had [is that the plane] would write "READ." It’s a book about how he has problems writing “read.” We had the idea of anagrams, moving the letters around.

But I thought that’s not something kids [deal with]. My daughter was 6. [At that age] learning is probably not about the order of the letters but it’s a physical thing. They can’t write P so it isn’t backwards. I remembered when I was a kid, I was airsick. I thought, the airplane should be airsick. The experiences should touch on the world of a child.

Once you find the key, you put the key in the lock and the book is solved. Once you get the idea, the writing of it is pretty quick. It’s all about the pacing. Then you can start the illustrations. But I take much longer than the [actual] writing. You spend six months on a thing that took a week to write.

The writing process is not just writing the words. I had to spend months thinking about it. For most writer/illustrators, that’s how it goes. The exception is if you want to use a certain type of picture—say a nighttime book—[and then write something to go with it].

Q: You mentioned the idea of literacy. What do you hope your audience takes away from the story?

A: I think children’s books should be fun; they shouldn’t be didactic. Ideally you want a book that secretly, slyly, puts in a teaching method or a moral that gives it some substance, but if the book isn’t fun the message will be lost because the kid isn’t going to engage with it. The best books should be fun, should be an adventure—and you peel back the layers. 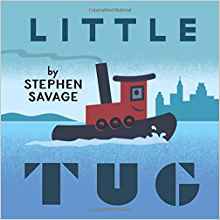 At the time I’m writing books, I’m a parent, and that’s coming through in a genuine way. I’m not trying to force a message on anyone. My daughter is 8 now and is out of the picture book [phase]—how will I get ideas? Hang around a kindergarten class?

Q: Who are some of your own favorite authors?

A: It’s always changing. Certain people pop into your mind. Crockett Johnson and Harold and the Purple Crayon. I love the simplicity of that book. It doesn’t feel like a kids’ book; anyone can enjoy that book. Just the title is brilliant.

I love Golden Book illustrations. There’s a guy I admire a lot named Rojankovsky, who did tons of books. There were a lot of Eastern Europeans and Russians. Those Golden Books weren’t so much about star authors; it was about the Golden brand. Rojankovsky did a Golden Bible book, a whole illustrated bible. [His style was] constructivist and modern. You can see Russian constructivism in his work.

There are people right now who are really good. Me…Jane by Patrick McDonnell. It won a Caldecott honor. It’s about Jane Goodall. It’s really simple and sweet; it has emotion. 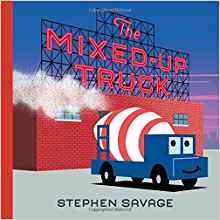 A book nobody knows was my favorite as a kid--The Whales Go By, illustrated by Paul Galdone. The author was Fred Phleger. It’s all about the journey of whales from Alaska to Mexico. Their journey, to me, was really exciting.

Sendak is an inspiration to me. The Nutshell Library is so good and so funny. It has a biting sense of humor, as much as you can for little kids. Sendak was good with real child-attitude.

There’s Virginia Lee Burton. You can see the influence of that [style] everywhere. I like books from that era.

Tops on my list, right behind Crockett Johnson, is Lois Lenski. She was amazing. Her books are kid-friendly. She was an amazing woman; she was married and had kids and would work after her kids were in bed. She would help underprivileged kids. She had an amazing life.

A: There’s always one book finished and waiting to come out. Jack B. Ninja—it’s the first book I’ve illustrated for somebody else in eight or nine years. It’s cute—it’s written by Tim McCanna. He has a whole bunch of books coming out now. It’s for Orchard Books, part of Scholastic.

The text is really fun—it’s a rhyming text. It’s an adventure story about a little ninja, like a little James Bond. It gave me a chance to create a fantasy Japanese world. That’s for the spring. It’s going to be a big Scholastic book club book. 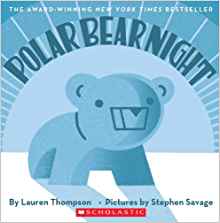 Then I’m working on one now that’s coming out later that year, for Neal Porter, Babysitter from Another Planet. The text is written and I’m doing the illustrations. It takes place in a ranch house from the ‘50s. It has a pink kitchen…[It’s like] the Mad Men era. I love the Mad Men era. A lot of people are interested in mid-century design…in a way, it’s the new comfort furniture style.

Then there’s another book which is not far enough along, so I’m not going to mention it. There are usually two in the works, either born or almost born.

A: People who want to be children’s book illustrators want to know the path. The path is very different for everyone. I’m going to be turning 53; I was late to the game. I started when I was 40. It’s helpful for people to know it takes a long time; it doesn’t happen quickly. You spend a long time on the path.

I didn’t decide until I was 30—it seems young [now]. People like Peter Brown or Dan Santat were undergraduate art majors and started publishing out of the gate. I worked in publishing for many years. I went to graduate school at the School of Visual Arts when I was 30. For a number of years, I was doing adult illustrations. I was working for The New York Times.

When I did Polar Bear Night, I felt I had something to say. It takes time to develop the confidence. You’re drawing on your own life experience. Little Tug was the first book I wrote…I felt I had enough skills to do an entire book. There was a long preparatory period to get there. The career has been a work in progress.