Denise Chanterelle DuBois is the author of the new memoir Self-Made Woman, which tells the story of her gender transition. She is an actress, environmentalist, and businesswoman, and she lives in Portland, Oregon.

A: I never really did intend to ever write this book. In fact, I never intended to ever write a book. Why should I? By 2010 I had reached a point in my life where at age 56, I was just relaxing.

I was enjoying finally becoming Denise, after decades in the closet, experiencing and enjoying classical music for the first time in my life, running/swimming, snorkeling on the beaches and coves on the north shore of Kauai, eating healthy, sleeping well, enjoying a close knit circle of friends, and just reflecting on my life as I watched the yellow sun set into the blue Pacific on the north shore almost every evening.

But something was off and it slowly began to gnaw on me. How could I possibly just end things here? How could I just melt back into society as Denise, take the easy road, not tell my story, and turn my back on others who I knew were out there suffering right now as I once did?

I was in a unique position to write my life story and this was the right time for me. Even if my story ended up saving just one person from checking out for good wouldn’t it still be worth it? Without question worth it!

And then I thought of the masses who I wanted to hopefully reach, and who would read my story--see my own agony, see my own struggle, feel my own shame, witness my own humiliation, and my own despair that at one time led me to near suicide. I thought why not open up my life in a memoir, just put it all out there, and don’t hold anything back?

I wanted to try and help to hopefully educate in a kind and caring way so maybe others could understand at least a little better, what it means and feels like to be trans in a society not yet ready for trans?

The final moment in deciding to write my memoir came when I’d myself in the comfort of friends’ living rooms and occasionally told stories of my colorful life--not that all lives aren’t colorful because they are--and my friends just kept saying, “Oh, Denise, you should write a book,” and I always countered with, “Yeah, yeah, yeah, I’ll get around to that,” without really meaning it, until one morning in my little rental studio, on my epic beach of the north shore of Kauai in 2010, I sat down one morning with my strong brew of morning tea, and began writing for the next four years. 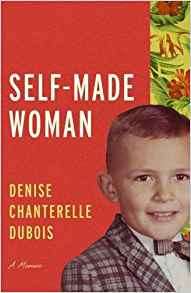 A: All during the long writing process of the original manuscript, which when finished was 640 pages, 350,000 words, I had a working title that kind of grew on me and had every intention to keep it. That title was “The Life & Times of Denise Chanterelle DuBois.”

I liked it for a couple reasons; first off, I honestly like my name so much that I thought why not just simply have it in the title right up there front and center, and secondly, the meaning of that title just kind of had an old school feeling about it.

I mean, my life was just so crazy through all those late 20th century decades, fast paced, with reckless abandon, that the title seemed an excellent reflection of that era; it seemed and felt right.

However, my publisher put the kibosh on the original title from the start, saying it was way too long. Being a new author and not really digesting that title rejection very well at first, I resisted, but the more I thought about it, the more I recognized that yeah, the title was way too long!

So I began to circulate to friends some new title suggestions thought up by me to gauge reaction, but nothing seemed to just really grab anyone.

Then out of the blue my editor in New York hit me with a title suggestion: “Self-Made Woman.” As soon as I saw that I knew that was the right title. Why? Because it embodies who I am.

I reinvented myself so many times in life that I lost count, and that comes out so clearly in my memoir. It was a perfect fit! You always hear that expression, “Oh, he’s a self-made man.” Well, I’m a “self-made woman”--of that there is no doubt!

Q: You write at the end of the book about the greater awareness today of gender dysphoria. How have things changed since you were a child, and what do you see looking ahead?

A: Great question, Deborah, and thank you for asking this. You know for all those years during the ‘50s, ‘60s, ‘70s and beyond, I sensed just complete, utter, hopelessness that anything could ever change.

There just seemed to be such a stigma attached to the word “transvestite” as it was called back then, or even “transsexual” as it later became better known as, then to “transgender.” Back then, being transgender meant being condemned to an impenetrable closed world, locked away forever in a glacial ice age that would never thaw.

However, as Charles Dickens penned in his very first novel, The Pickwick Papers, “never say never”; one can see how prophetic those words did become!

Yes, it’s only been very recently that the sun has finely shone on the transgender ice world, ushering in unheard of hope and promise, and a new era for all that is simply breathtaking to me!

So what happened to make this paradigm shift occur now? The legalization of gay marriage became the defining issue of our times, bringing about a new civil rights movement in this country that was encouraged and supported, albeit slowly at first, by an open-minded, positive administration saying it was okay to be transgender, out, and we’re all deserving of equal civil rights.

And gradually, the American people themselves came around for us on that way of thinking as their attitudes on those who are transgender began to shift in support of. I finally see sunshine ahead for the first time in my life as a transgender woman and I never in a million years thought I could ever feel this way.

Yes, bumps in the road still lie ahead, as evidenced by the recent blowback over transgender use of public bathrooms, and a new administration now in power that is not friendly to the LGBTQ population, but notwithstanding that set-back, the long term prospects for LGBTQ equal rights in this country remain in place.

Change, especially in this arena, comes in baby steps. The not too distant future holds the promise of where it will no longer even matter, no longer even be an issue, if you happen to be transgender, gay, lesbian, straight, bisexual, whatever, or who you happen to be married to, because all those labels will be gone. Happy days to us all when that time comes around and it will.

A: I’d love to say a better understanding of what it means to be transgender, but how can I really say that? I want speak for all, but can really only speak for myself and my life.

Yes, we’re all different, yet we’re all the same. We all have hopes, dreams, aspirations, want to be loved, and want to love others.

I really hope that readers can see that I had to learn how to love myself first, before I could ever hope to love others. That’s been a real tough hurdle for me in life and suspect it is for many others too, transgender or otherwise.

We’re all human, we all make mistakes, and I hope readers can learn from my book how hard it was for me to learn from my own at times very reckless mistakes, so they can maybe learn from their own mistakes in life, gain from that, find their own happiness, and learn to know what love really means for them.

Love is what makes us all the same towards each other regardless of gender or sexual orientation. Love is indeed universal and being alive as a human and willing to share and express that emotion makes it all worth it in the end.

We came in with nothing, we go out with nothing, and all that matters in between for our entire life is love. That is what I hope readers take away from my story.

A: Honestly? I have an entire second book already mapped out in my head set to go on what happened to me after Self-Made Woman pretty much ended in 2007, which will take the reader right up to the present year of 2017. Such an exciting decade for me!

There is still so much to tell of my story that is just as gripping and thrilling as my first book, an ascent that totally caught me off guard in my new life as Denise.

I also considered that I could simply write another book from the 400 + pages of edit that ended up on the floor! So much did not make the final edit, but I’m way okay with that. It’s all really good stuff though, sure to grab the reader but that’s really for another discussion.

So why haven’t I started writing Book #2 yet? Because I simply want to wait and see if Self-Made Woman becomes the success I suspect it can be before I go thru this entire process all over again.

However, that being said, if I do elect to write my second book, I’m certain it will proceed much faster than before, and I won’t write 650 pages either!

What a wonderful and rewarding education I’ve gained being exposed to the book world and all that entails. I’m 63 years old now and never expected another career in my life. Well, gosh, never say never!

A: Yes. For decades I kept Denise in the closet. I did not want anyone, even my ex-wife, to know anything about Denise, nor my parents, (now dead), siblings, relatives, friends, pets, you name it.

So then after 49 years I finally come out and become Denise and what’s the very first thing I do? I kick Dennis in the closet for the next decade because I can get away with doing that.

I came out of nowhere, unknown to anyone, from the other side of the tracks, very different from the famous celebrity-athlete who transitioned recently, and who was also very brave.

Kicking Dennis in the closet was easy for me. I quickly learned to live as Denise, and became very good at passing in public with looks, voice, and posture.

Well, in the past year or so when I realized that my memoir would be published, it dawned on me that an important message to the public is to mention that I will always remember where I came from.

So even though Denise will always have center stage now for the rest of my life now, that there will always be a role for Dennis on that same stage. I’m no longer ashamed to talk about who I am, or where I came from. That in and of itself is very liberating.