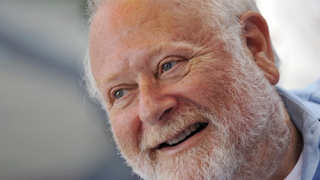 Jonathan Lynn is the author of the new novel Samaritans, which takes place at a Washington, D.C., hospital. He is the director of 10 films, including Clue and My Cousin Vinny, and he wrote the BBC series Yes, Minister and Yes, Prime Minister. His other books include The Complete Yes, Minister and Comedy Rules. He is also an actor and lawyer, and he lives in New York.

Q: Your book takes place at a hospital in Washington, D.C. How do you see it fitting in with the current debate over health care in this country?

A: The book is about the utter failure of the U.S. healthcare system. The World Health Organization ranks U.S. healthcare 38th best in the world, behind Colombia (22nd) and Saudi Arabia (26th), and just above Cuba.

According to the Centers for Disease Control and Prevention, 25 other industrialized nations do better than the United States at infant mortality.

With more than 250,000 deaths a year, medical errors are the third leading cause of death in America, behind heart disease and cancer. And the number one cause of bankruptcy in the United States is medical debt.

Obamacare made it somewhat better but there are still 27 million Americans without health insurance, and Trunpcare is striving to nearly double that number. It’s a catastrophe for anyone who is not wealthy.

So I set my new novel, Samaritans, in the fictional Samaritans Medical Center in Washington, D.C., a struggling hospital beset (like most hospitals) by rising costs and poor management. In desperation the Board hires a hotel man as its new CEO: Max Green, the head of hotel operations at a Vegas casino.

He understands about check-in and check-out, number of dinners served, number of beds occupied but he has no interest in health care. He does, however, see how to make a huge profit out of hospital care, potentially billions. 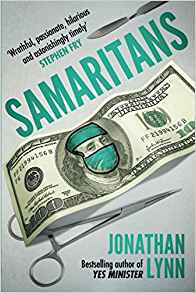 Q: How did you come up with the idea for Max?

A: You never know where your characters come from – at least, I don’t. As you write, they grow and start to live on their own.

I wanted Max to believe completely that the business school model is right for every institution and service in America. I wanted him to be a man who puts profit first, but for what he believes are sound economic reasons - he doesn’t think that, ultimately, any other reasons matter. A man who doesn’t believe in “entitlements” – in his mouth it’s a derogatory word.

To Max, paradoxically, if you need entitlements you don’t deserve them, because they go to people who are lazy, feckless or in some other way unworthy. “People can’t have what they can’t afford,” Max explains. “That’s what got America into this economic mess – people wanting something for nothing. There’s no morality in that, is there?”

He has lost all understanding of what used to be called the deserving poor. So Max had to be materialist, smart but in a limited way, a narcissist… who better than a man who had previously run casinos before becoming CEO of the Samaritans Medical Center?

A: I usually know approximately how anything I write will end but how it gets there is a daily process of discovery. The more you learn about your characters the more they have to take control.

Harold Pinter called it “listening to your characters.” Not that I write anything like Pinter, much as I admire him. My style is more influenced by Carl Hiassen or Elmore Leonard. 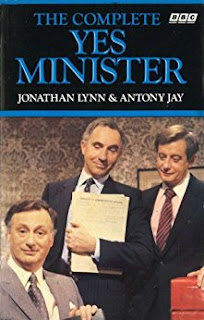 I wanted this novel to have real velocity. I hoped it would be one of those books you can’t put down, I wanted it to be a vertiginous experience. Joseph Heller, writing about Catch 22, said that Nabokov in Laughter in the Dark took a flippant approach to situations that were both deeply tragic and pathetic.

“I began to try for a similar blending of the comic and the tragic,” he said, “so that everything that takes place seems to be grotesque yet plausible.”  This precisely describes the way I have approached most of my writing although, sadly, Samaritans is much closer to reality than you might like to think.

For instance, after I started writing Samaritans I read that Aetna, one of our biggest insurance companies, had hired the CEO of Caesar’s Palace to run their health insurance division! But why not? Healthcare is the ultimate lottery.

A: Art is criticism of life, and comedy is criticism by ridicule. Comedy has a vital role to play in controlling those who would have power over their fellow citizens because it criticizes the institutions of society and those who run them unjustly, unfairly or corruptly.

That’s not just politicians, of course: that’s also the cops, the courts, the prisons, the military, academia, all institutions that are capable of misusing their power. I don’t know anyone who writes comedy who is not angry, or driven by a sense of injustice and unfairness, and a desire to reveal hypocrisy.

But it has to be tempered with a sense of irony. Humor is the best way I know to make social and political ideas and paradoxes accessible. I learned that at an early age from the comedies of George Bernard Shaw, Evelyn Waugh and Billy Wilder. There’s a lot about this in my book Comedy Rules. 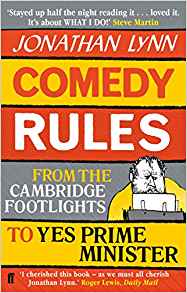 A: I’m toying with ideas for two new books. One is an epic, multi-generational saga, if I can find the energy. Another is a sort of memoir, not about me so much as about extraordinary people I’ve encountered in my life.

I’ve also written two screenplays, one a comedy about a modern marriage (another of those institutions) and the other an adaptation of Somerset Maugham’s wonderfully subversive feminist play The Constant Wife. Both have producers who are trying to set them up.

And my play, The Patriotic Traitor (published by Faber and Faber), which had a sold-out run in an off-West End theater, will soon be opening in London’s West End.

A: In 1987 a man called Rick Scott started a company called Columbia when he purchased two hospitals in El Paso, Texas. Scott was CEO of Columbia when it merged with the Hospital Corporation of America and he turned Columbia/HCA into one of the largest health care companies in the world.

Forbes magazine said Scott bought “hospitals by the bucketful and promised to squeeze blood from each one.” Scott wanted to “do for hospitals…what McDonald’s has done in the food business.”

In 1997, under Scott’s management, HCA pleaded guilty to 14 felonies, fraudulently billing Medicare and other healthcare programs,  and the eventual settlement was $1.7 billion. The Justice Department described it, at the time, as “the largest health care fraud case in U.S. history.”

Rick Scott stepped down and left HCA with a $9.88 million severance package along with 10 million shares of stock worth about $350 million. HCA continues to thrive and now manages 168 hospitals and 116 surgery centers.

Max admires Rick Scott and wants to emulate him.