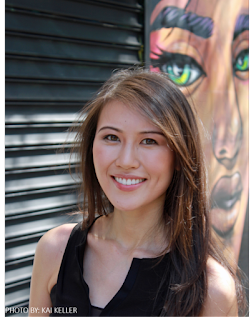 Sophie Chen Keller is the author of the new novel The Luster of Lost Things. Her work has appeared in a variety of publications, including Glimmer Train and Pedestal. She lives in New York City.

Q: You've noted that the inspiration for this novel came from a "lost" flyer that you saw in Hawaii. How did that eventually turn into the book?

A: While camping on a volcano in Maui, I stumbled across a “Lost” flyer that someone had posted at the campsite. It was for a missing camera that contained irreplaceable family photos with sentimental value.

It was clear how much the camera meant to whoever posted the flyer, and I couldn’t stop wondering whether they had ended up finding it. I thought about all the things people lost, and what they were really looking when they looked for something like a missing camera. I wondered whether anyone responded to these flyers.

That’s when I had my first idea of who Walter would be—a boy who dedicated himself to answering “Lost” flyers. Naturally, that led me to the intriguing question of why he was doing it.

Upon returning from the trip, I began writing Walter’s story. I thought of it as a grown-up version of the books my mom used to read out loud to me before bed.

I wanted it to bring us back to those childhood classics, to that time when the world was bright and brimming with possibility. As we get older, it becomes easier to forget that the world can still be like that.

When we are feeling helpless or afraid, I hope that The Luster of Lost Things is a breath of fresh air—a tale that’s warm and wondrous and joyous, yet layered with meaning and observations on what it means to be human. Q: Can you say more about how you came up with your main character, Walter, and how you created his narrative voice?

A: As I pondered the question of why Walter would spend his time looking for the things people lost, I came across a disorder in the course of my research, a motor speech disorder called childhood apraxia of speech.

It’s often misdiagnosed as autism or ADD, but it’s a neurological disorder where the brain knows what it wants to say, but has difficulty coordinating the muscle movements necessary to produce those sounds.

It seemed to me a lot like being trapped inside your own head, which was something I identified with. I didn’t know a word of English when I immigrated from China to the U.S., and I remember starting school and not being able to communicate my thoughts and needs to anyone. It was frustrating, lonely and, at times, frightening.

One time, I was sent to the principal’s office and my parents were called in from work to pick me up, because I refused to present a book report. The teacher thought I was being defiant, but in reality, I was self-conscious and afraid of speaking in front of the class.
In creating Walter’s voice, I wanted to highlight that contrast between what you see on the surface and what actually goes on underneath.

As Walter tells us his story—the first one he has to tell in his 13 years, with the excitable and grandiose flourishes of any child who is bursting to tell you a story—his voice is fluid, imaginative and trenchant, from a lifetime of living in silence, looking and listening and left to his own thoughts. It’s a sharp difference from his verbal speech patterns, which are halting and limited.

At the same time, he’s still 12 years old—his voice is simple and direct, drawing unexpected connections or painfully honest conclusions, as children tend to do, to the chagrin of the adults around them.

Even as Walter tracks lost items, even as he interacts with the diverse people he encounters, his voice—the richness and compassion of his inner world—remains the clearest reminder of all for us to see beyond the surface.

Q: Could this book have been set anywhere else besides New York City, and how important is setting to you in your writing?

A: Setting matters. Of course, it matters in terms of creating a believable and transporting reading experience, but it also shapes many of the other story elements—the voice, the style, the characters and the issues they face and the ways they live and think and react.

Much of The Luster of Lost Things is about finding a place to belong, to be at home; it’s about our shared humanity, and nowhere is that more obvious than in New York City.

You see how different people are, and at the exact same time, how similar—in the mingling and clashing of cultures and backgrounds, in the universal emotions that spill out onto the streets as people carry their personal baggage onto subway platforms, inside restaurants, across parks.

The characters that Walter encounters in his journey are a familiar and distinctive part of that urban landscape—the conductors of the trains you take everywhere, the can collectors you see searching through piles at the street corners, the food vendors you run out to for lunch—and yet, they are ultimately just like the good folks living in California, in Ohio, in Massachusetts, in China (coming from someone who has lived in all of these places)—people with aspirations and disappointments and joys, people who have lost things, people who are searching for the missing pieces.

A: I’m not much of a planner, in writing and in life. My writing usually starts with some kernel that lodges in my heart—an image, a concept—that bothers me until I write about it. Then I’ll just start writing, figuring out everything else as I go.

A: I’m working on a second novel. I have a lot of ideas for it, and I’m already very excited about them!

A: I hope that Walter’s journey will remind people that there is goodness that lives in them and around them. That’s a message I feel many, including me, need to hear—to remember.