Joanne Levy is the author of The Sun Will Come Out, a new middle grade novel for kids. Her other books include Small Medium at Large. She lives in Ontario.

Q: What inspired you to write The Sun Will Come Out, and how did you create your character Bea?

A: When I was a tween, I spent three summers at sleepaway camp and my final year (at a different camp than the first two) was pretty awful. There were a few bright spots, but overall, I struggled with making friends and dealing with bullies who seemed to delight in ostracising me and turning other kids away from being my friend.

Like Bea in the book, I spent some time in the infirmary and remember it being a nice respite away from the mean girls in my cabin. I honestly don't recall what took me to the infirmary in the first place, but I suspect my ailment started out as being very real but *may* have been exaggerated to enable me to stay there longer.

Other than that, the events in The Sun Will Come Out are made up, but the feelings are very real and are taken from my own experience.

Most of my main characters have an element of me in them and that's very true for Bea. Not only did I experience a rough summer at camp, but overall, I was a shy kid and struggled to make new friends.

Like many kids, I had to deal with bullies. My shyness extended to pretty severe stage fright which I still struggle with in adulthood. Even Zoom fright, such as it is these days, so much of what Bea goes through feels very personal for me.

I've never gotten stress-hives, but I have a very nervous bladder to this day when faced with public speaking of any kind. TMI, probably, but I like to be very honest in my writing, so there it is.

A: It means a lot that Kirkus and others appreciate what I was trying to do with the book and think I did it sensitively. There's nothing quite like getting a review that shows the reader gets it and thinks you did a good job!

Including a chronically ill character was complicated for a couple of reasons. First off, it was really, really important to me that Harry not be simply a prop for Bea's growth. He had to have his own arc and growth journey and I wanted his character to be as well drawn as Bea was.

The last thing I wanted was for him to be seen as a token person with an illness that the reader was supposed to feel bad for or that Bea had to save. He doesn't want people to feel sorry for him and neither did I. 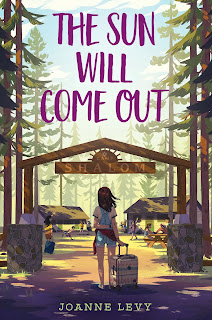 I also did research on his illness and had a wonderful sensitivity reader from the Progeria Research Foundation who helped me tweak the finer details of the language I used and how I framed Harry, both for the reader and in the way he looked at himself.

Life is not always tidy, fair, or easy, and some kids get sick or have different abilities and I think it's important to show that honestly. When we hide illness and disability from kids to protect them from it, we imply (whether on purpose or not) that there is something inherently wrong or less than in people who have an illness or are differently abled.

I'd rather normalize that we're all different and show that hey, sometimes life isn't fair. It's what you do with the time you have, how you frame your experiences, and what you can do that matters.

When the book was first shopped, an editor liked it but that Harry's illness was chronic and there wasn't much hope for him was an obstacle to her making an offer. I should be clear that it was about the book not fitting that particular imprint than that the editor didn't appreciate the theme.

She asked me to change it but I dug my heels in. I felt if I removed his character or changed his diagnosis so that he would get better, it would have been disingenuous. Worse for me as creator, it would have ripped out the heart of the book.

I still feel like I made the right choice, even though it meant a much longer journey to publication. The book didn't sell in the first round of submissions and got put on my back burner for several years.

A: I originally started drafting this book back in 2013 as a follow up to my debut, Small Medium at Large. I put it away for a while when I lost my mom.

Then I picked it up again and finished it, but even then, it went through many iterations, so I can't say for sure what I knew when I first started drafting. I mean, I don't remember what I even had for lunch yesterday, so...

BUT, I'm a total pantser, so there's a good chance I had no idea where the book would go. Left to my own devices when starting a project, I know maybe three or four plot points when I start drafting. For me, the joy in writing is in the drafting--the discovery of the story. But that also means more editing is necessary.

That said, all my books end with some sort of satisfying and hopeful ending, so maybe I didn't know exactly what that would look like, but I had something to work toward.

I also hope that it comes across that doing things outside of your comfort zone can have huge payoffs. That's a hard lesson to learn, especially for shy kids, though.

Really, I just want my books to be entertaining, so even if a kid reads the book and their only takeaway was that it was a fun book with a few laughs, that's A-ok in my books, too.

A: My next book, Sorry For Your Loss, comes out in October of this year! It's the story of Evie, whose family owns and runs a small Jewish funeral home.

Evie thinks she knows just about everything about death and grieving, since she works in the funeral home and grew up “in the business.” But when a boy who has just been injured and lost both his parents in a tragic accident comes to the funeral home, she quickly learns she doesn't know as much as she thought.

I'm so excited about this book as it's something of an homage to my dad who runs a small Jewish funeral chapel in my hometown.

I used my behind-the-scenes access to sort of pull back the curtain on what happens when we die. It was important to me to show, in a very safe and respectful way, what happens to us when we die (physically, at least).

A: Thank you so much for the great questions and for featuring me and The Sun Will Come Out! If your readers want any more info about me or my books, they can check out joannelevy.com or if they like pictures of cats, crafts, and sometimes my lunch, they can follow me on Instagram at  https://www.instagram.com/joanne_levy_.