Dean Robbins is the author of the new children's picture book Thank You, Dr. Salk!: The Scientist Who Beat Polio and Healed the World. His other books include The Astronaut Who Painted the Moon.

Q: Why did you decide to focus on Dr. Jonas Salk in your new picture book?

A: We’re living in a time when many people lack faith in science, as we’ve seen during the coronavirus pandemic. A significant number of Americans have ignored public health directives and declined to get the vaccine.

In this moment, Jonas Salk stands as an example of science’s potential for healing the world. Thank You, Dr. Salk! portrays Salk’s determination to find an effective polio vaccine in the 1940s and ’50s. The public put its trust in the scientific method and participated en masse in the largest field trial in medical history, proud to call themselves “Polio Pioneers.”

This communal effort is the book’s centerpiece, suggesting what we can accomplish when we all work together.

Q: The Kirkus Review of the book says, "Children will easily draw a parallel to Covid-19 and so will be interested in the history as well as the mechanics of vaccines." What do you see as the parallels between Salk's work and that of the doctors and scientists working on the Covid vaccines today?

A: Like Dr. Salk, today’s scientists have marshaled their creativity and skill to create vaccines that will save countless lives. But sadly, Americans are more divided than they were in 1954, when the Salk vaccine received its national test. 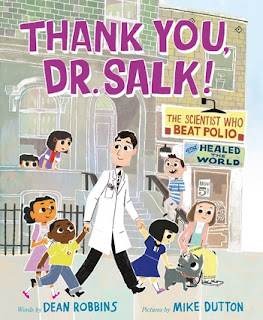 Back then, much of the country rallied behind the cause of preventing polio through the March of Dimes, which was initiated by President Franklin Roosevelt. Now, the chief medical adviser to the president gets death threats for explaining the scientific rationale behind public health measures.

I hope Thank You, Dr. Salk! will help children who have lived through Covid-19 appreciate science’s vital role in fighting disease.

Q: What do you think Mike Dutton's illustrations add to the book?

A: A children’s book about disease has the potential to be dreary and depressing, but Mike’s illustrations emphasize the joyousness of Salk’s campaign against polio. He vividly renders the country’s euphoria when the vaccine proved effective, as bells rang, cars honked, people danced in the streets, and thank-you notes piled up at Jonas’ door.

Mike’s drawings evoke the diverse group of Americans who united to defeat polio, with witty details and dynamic compositions on every spread.

Q: What do you see as Jonas Salk's legacy today?

A: For decades, polio paralyzed or killed millions of people. Now, most of the world can enjoy what Salk called “freedom from fear.” That’s quite a legacy. The Salk Institute he founded continues his work by seeking cures for cancer, Alzheimer’s, and other dreaded diseases.

A: 2021 is a big year for me! Along with Thank You, Dr. Salk!, I have three nonfiction picture books coming out about my personal heroes.

The Fastest Girl on Earth!: Meet Kitty O’Neil, Daredevil Driver! (Knopf, August 10) is about the extraordinary deaf woman who set a land-speed record in a rocket-powered car.

Mambo Mucho Mambo!: The Dance That Crossed Color Lines (Candlewick, October 5) is about a powerful desegregation effort in the 1940s, when New York City’s Palladium Ballroom welcomed people of all backgrounds to dance together to Latin jazz.

And You Are a Star Ruth Bader Ginsburg (Scholastic, December 7) is a portrait of the Supreme Court justice that portrays not only her fight for equality and justice, but also her legendary sense of humor and eccentricity.