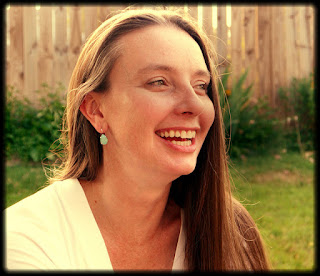 Renée K. Nicholson is the author of the new book Fierce and Delicate: Essays on Dance and Illness. Her other books include the poetry collection Roundabout Directions to Lincoln Center. She is associate professor and director of the humanities center at West Virginia University.

Q: What inspired you to write these essays, and over how long a period did you write them?

A: I wrote the first essay, “Five Positions,” during graduate school in the spring of 2006. At that time, the idea of a book hadn’t even crossed my mind. I simply wished to capture a bit of my dancing past on the page.

I had studied fiction, and was learning about nonfiction forms. Essays felt right for me, capturing a snapshot in time, based on my life. I still love fiction and read quite a bit of it, but my current writing leans more towards personal essay.

I continued, off and on, to write essays, and got quite serious about a collection in 2011, when I was chosen to be the Emerging Writer-in-Residence at Penn State-Altoona. I thought I’d alternate between fiction and nonfiction; however, the essays kept tugging at me.

The last essay in the collection was finished in 2018, but I kept revising after that. I find my best writing comes in revision.

Merging the essays into one collection required me to look at the overall arc of the book, continuing to revise for clarity and to eliminate repetition. I think it took me a while to think of this writing as a book project, and not singular essays.

As far as inspiration, I wanted to better understand my life as a dancer, and the ways, even after dancing wasn’t an option for me anymore, that dance remained an important aspect of my life.

After having a total knee replacement, I gained enough mobility that teaching ballet became something I could do, and I found that I enjoyed passing on what I’d learned.

So much of this book also revolves around my changing physical self. And I didn’t always see that at the time I wrote each piece, but the more I put them together, the more I saw how my physical body changed.

Writing about dance also made for unique challenges. How could I explain enough about ballet that a nondancer wouldn’t be lost, but a dancer wouldn’t feel alienated? How does one describe physical movement she can’t do anymore? Movement doesn’t lend itself to easy description. The lack of movement is even harder to describe.

These were exciting writing challenges, and I think questions like these motivate me each time I write about ballet. I worked those passages time and again to try to get them just right.

The writing also helps me describe the limitations of living with rheumatoid arthritis. There’s satisfaction in that part of the process, maybe just like perfecting a step in the ballet studio. 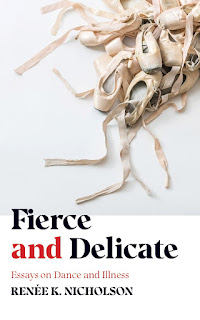 A: In one of the essays, I talk about a dancer I trained performing chaînés, which translates roughly to “chain.” They’re a kind of turn in which the dancer makes a series of half-rotations moving down a line, and I described the manner of the turn as being equally fierce and delicate.

I often find my best titles are buried in the writing itself, just like this one was. It’s usually there, waiting for you to pluck it out. I’d been through some other titles, but none of them felt right until Fierce and Delicate.

Q: In an interview with the Southern Review of Books, you said of your experiences in graduate school, "I had to grapple with articulating the experience of illness in the same ways I was about dancing." What do you see as the impact of both experiences on your life, and how has it affected you to write about them?

A: Rheumatoid arthritis is an auto-immune condition where the immune system attacks healthy joint tissue, making it difficult to move. Ballet, of course, structures itself around movement.

The French terms are usually verbs that describe the action: frappé—to strike, tendu—to stretch, sauté—to jump. But to a reader in English, the French itself doesn’t really explain the movement. Sauté—little jumps—are your first step towards those big leaps that allow you to feel the air. Bits of flying.

The one thing that ballet and RA have in common is that they are both intensely physical. RA limited my ability to fly, to move like a dancer, but like dance, it was felt in my body. The physical sensations of both dancing and illness define so much of my life.

So, my task was to figure out in each case how to write that version of my body, the one that danced and the one that lost the ability to dance. And how I gained a little of that back, enough to share what I knew about dancing with others who wished to dance. And what I gained from that experience, which was a memory of myself as a younger person, a ballet dancer.

When I think about it, it’s all wrapped up in each physical self, and the kind of peace I came to when I found I could articulate them both. I discovered things about who I was and who I might be in the future. Finding the language for each, I understood my own journey in a better, more complete way. It felt healing.

Dance presented challenge and hardship, as does illness, and those challenges shaped who I am. I still love dance—it will always be my first love. But I’m not maudlin about it, and I think that the book allowed me to share some of that love. Like most loves, it wasn’t always easy. But rarely are the truly valuable things in our lives the easiest ones.

Teaching gave me other options, and I hope my love of my students shows in those later essays, as well as some of the wonderful people I met.

One of those people was a man named Peter Franklin-White. I met him the last year of his life, and he taught me a lot about how to be a former dancer. About dignity and memory and how some days are for tea and others champagne, and both are good.

Peter was 90 years old, living in Morgantown, West Virginia, an original member of the Royal Ballet of England. He shared his stories with me. His dancing took him all over the world, dancing with some of the greatest artists of all time.

While he had pride in those things, he didn’t boast, and sometimes he wanted to talk not about dancing but about how to make tea or how much he loved to cook. So many things make a full life. Peter embraced them.

So, I guess what I hope is that the book doesn’t shy away from the difficult things, and that it also allows a reader to understand the beauty of after—after the training, after the stage, a different life emerges, full of potential and growth.

The collection ends on a dancer who could have pursued a dance career but chooses a different path for herself. She’s just so beautiful, both as a dancer and beyond being one. And that’s something too—we all have the capacity to not just be ourself but to be many authentic selves. To me, this is hopeful.

A: I just can’t quit writing essays, and my next book-length project is a collection of essays about cover songs.

Maybe “about” isn’t the right word. The cover songs inspire what the essays end up being about—some about my nostalgia for the late 1980s and early 1990s, some about feminism, some about losing my brother to cancer, and others about how goofy I sometimes can be.

I wrote the first as a one-off when I heard my niece singing the Marcy’s Playground song, “Sex and Candy,” except she knew it as a Maroon 5 song because they covered it.

I remembered being a gawky 20-something when that song came out, and I wrote about that, about how I hadn’t quite figured things out, and about how I couldn’t know where this life was going to take me. Innocence, but not quite.

These cover songs unlock a door into something I want to say. It’s definitely not music criticism or music journalism, but more about how music plays a role in our day-to-day lives.

And, if I think about the essays I’ve written, it’s a lot about how the cover works—a remake. We constantly remake ourselves; we change and change over time.

Sometimes this can lead to extraordinary reimagining—I think about how I loved Chris Cornell’s cover of Prince’s “Nothing Compares 2 U” even though I once thought no one could possibly cover Prince. But it is also a song of loss and longing, and I explore what that means to me in that essay.

And some covers are ridiculous! Mötley Crüe covering Madonna’s “Like a Virgin” is a classic example of camp going horribly wrong. So of course, I want to write about that. It’s funny. I didn’t really think of myself as a funny writer, but these essays help me find a self-deprecating voice or a bantering voice as easily as a heartfelt or somber voice.

So, we’ll see how these come together as a book. I am probably about two-thirds of the way through drafting—that is, before the revision process takes hold. It’s fun to write these essays, and I love how flexible the form can be, and hopefully it will come together successfully as a book.

A: I used to think “what’s your book about” was the hardest question to answer, but this one might be up there with it!

I guess you should know, outside ballet and illness, that I love Prince, vintage sweaters and jewelry, hats, and Shark Week. During this crazy year of COVID, I also learned to make a pretty tasty butternut squash soup. Also, the smell of gardenias! A creamy bloom that smells of heaven. Maybe all or maybe none of these things will crop up in future writing.

For any aspiring writers out there, my best advice is to be true to the book only you can write. And thank you to all who read Fierce and Delicate—I’m truly grateful.