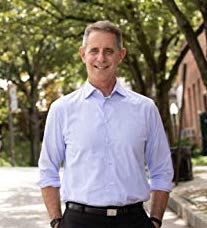 Sid Balman Jr. is the author of the new novel Seventh Flag. It takes place in Texas, and focuses on two families. A longtime journalist, he lives in Washington, D.C.

Q: How did you come up with the idea for Seventh Flag, and for the two families you write about?

A: Like every journalist or former journalist, I felt for decades that there was a novel in my back pocket if I could just find a thread to stitch together my experiences as a war correspondent, news executive, international development practitioner, entrepreneur and behavior-change specialist focusing on strategies to mitigate violent extremism.

I began to see a narrative arc over a decade of helping a good friend develop an off-the-grid ranch in the high desert of West Texas outside the tiny town of Dell City, about 80 miles east of El Paso and the beating heart of “Seventh Flag.”

Amid the buzz of power tools during the day and the pop of Lone Star longneck bottle caps in the long evenings at the base of the Guadalupe Mountains, I came to know the families that settled Dell City and much of West Texas in the 1950s, who generously shared the stories that comprised so much of the novel.

But the single seminal moment for the novel came while watching a documentary on the football team at a predominantly Muslim high school in Michigan during Ramadan — the month of dawn-to-dusk fasting — after 9/11.

The entire story unraveled before me as I watched Muslim teenagers endure the universal tradition of twice-daily football practices without food or water in the stifling late summer heat of Dearborn amid the stigmatization of their faith after the Twin Towers fell.

It was something of an epiphany, like finding the perfect lede for a complicated news story as I had tried so many times during my nearly two decades as a daily reporter.

Seventh Flag would be a multigenerational parable about the radicalization of the United States from World War II to the present — on all sides of the political and theological spectrum — highlighting the commonalities and strengths in our rich, diverse nation through the iconic symbols of our culture. 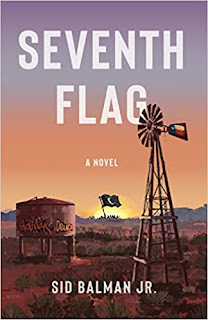 I would tell this story, which spans the globe and tackles such divisive issues as violent extremism, political polarization, natural resources, evolving gender roles and patriotism, through four generations of a prosperous, iconic West Texas farming family and a family of Syrian-Muslim migrants that helps them build an empire in the high desert.

And at the heart of Seventh Flag is the premise that family and community are the true power of our vibrant, troubled democracy.

A: With all of that as a foundation for the story, I spent several months of intensive research in Texas, along the Mexico border and at West Point.

Writing historical fiction is a journalist’s dream because the novelist is free to concoct the quotes and story as long as the facts are accurate, and it frees your sources to share freely with no fear they will be identified or quoted by name.

During several months of intensive research with farmers, laborers, Muslim leaders, historians, law enforcement, criminals and environmentalists in Texas and Mexico, and staff as well as plebes at West Point, I uncovered so many of the nuance and detail that make or break a work of fiction.

For example, it was during a casual conversation at a Mosque in El Paso when I first discovered the colorful lore of the U.S. Army Camel Corps and how it contributed to Texas having more Muslims than any other state.

Q: You note that growing up, you would visit Six Flags Over Texas with your family. How was your novel's title chosen, and what does it signify for you?

A: No greater highlight of a summer day than when my parents would take us to Six Flags Over Texas, an amusement park near Dallas thematically designed around the six sovereigns that ruled over the state: Spain, Mexico, France, the Republic of Texas, the Confederate States of America and the United States.

In Texas, and in America today, there is a “Seventh Flag” — not one of a state or a nation but one that represents a mosaic of cultures, religions, and people from every corner of the world struggling to define what it means to be unified as Americans under an ambiguous banner.

The reader comes to understand this ambiguity through the four generations of two families in the novel — the Laws, an iconic West Texas farming family, and the Zarkans, a family of Syrian-Muslim migrants who help them build their dynasty.

A: Content today, particularly social content, is produced and consumed in seconds. This phenomenon leaves little time for detailed scene-setting or thoughtful consideration of the nuance that distinguishes the profound from the merely prosaic.

In the most extreme cases the speed of information has literally altered the course of history, such as with the outcome of the recent presidential election in the United States, and the subsequent tsunami of tweets from the highest offices in our nation that ultimately prove to be false but that are so temporal nobody is ever held accountable.

I have worked as a journalist where packs ruled, like accompanying an American president on an overseas mission as part of a handful of reporters charged with providing “readouts” for most of the world’s media; and I have worked on stories where the nearest journalist was thousands of miles away, like the war in Somalia or local crime in suburban Dallas.

While the glitz and glamour of tagging along with a president can be fun, I vastly prefer the solo approach where you must transport the reader to your story. Recreating the scene and context, making the reader taste and feel the story, is what makes your copy sing.

This is the most frustrating, but ultimately most satisfying, aspect of writing a novel. That is when art happens.

There is a chapter in Seventh Flag where a privileged woman from Dallas, who married into the prosperous West Texas farming family, ends up on the top floors of the World Trade Center on 9/11 in the office of her lover after one of their trysts in New York.

Creating and executing this scene in a way that was true to the story and true to the character was excruciatingly difficult. But simply describing the scene and allowing the chapter to play out in an organic way was satisfying and produced one of my favorite episodes in the book.

Bitsy knew it was the end for her; better to jump and get it over with than to burn. She threw one leg over the window sill, then the other, and stood facing out on the narrow ledge, holding the sill behind her with both hands, like a swimmer poised for the starter’s pistol. Given the circumstances that had brought her to this moment, Bitsy was ashamed to pray, but she hoped this final desperate act might somehow cleanse her in the eyes of her God. Bitsy imagined how she would look on the pavement 105 stories below and held her skirt tightly at the knees all the way down.

A: I have experienced far more than my share of good luck as a fledgling novelist, particularly in the echo chamber of modern publishing.

A large part of the credit goes to my agent, April Eberhardt, and publisher, Brooke Warner, at the indie publishing house Spark Press. Under their guidance, I’m expanding Seventh Flag into a series of books around similar themes on the experiences of diaspora populations to the United States.

The next novel in the series, Murmuration, looks at Somalis in Minnesota, where more of them live than any other state.

It will be a global story, with the heart of it playing out in Minneapolis and the area around St. Cloud — with a cast of pirates, white supremacists, ISIS recruiters, corrupt law enforcement, rising political stars and a cameo by a central character from Seventh Flag.

I will draw on my long history with that country and its people, including my coverage of the American invasion during the early 1990s and my recent work there on behalf of President Barack Obama’s administration developing a project to counter violent extremism among Somali youth in Minneapolis.

I spent several weeks in Minnesota this summer on a research trip and, after a bit more digging, am excited to start writing.

In addition to writing Murmuration, I have a six-week tour of bookstores, schools, and libraries from late October to Thanksgiving promoting Seventh Flag throughout the South, Southwest, and West. Quite a road trip! And one on which I should probably take my trusty “therapy” dog.