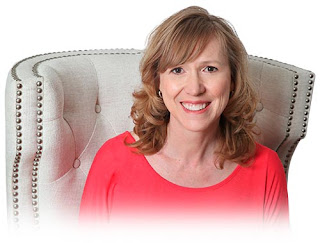 Aimee Reid is the author of the new children's picture book biography You Are My Friend: The Story of Mister Rogers and His Neighborhood. She also has written Mama's Day with Little Gray. She is a former high school teacher.

Q: You note that you only started watching Mister Rogers' Neighborhood as an adult with your daughter. Why did you decide to write a children's picture book about him?

A: The simple answer is that I mostly write picture books. The fuller answer is that I wanted to share the story of Fred Rogers’ life with the same audience to which he devoted himself—young children.

I found myself drawn to the theme of the impact that one person’s kindness could have in the world. The more I learned about Fred Rogers, the more I wanted to convey his key message to young readers.

Q: How did you research Fred Rogers' life, and what did you learn that especially surprised you?

A: I read extensively about Fred Rogers and watched videos that focused on his work. I viewed his wonderful interview with Karen Herman for the Archive of American Television.

I was struck by how much care Fred Rogers took with his work and relationships. He devoted himself to ensuring that each program kept children’s needs in mind. He also paid extraordinary attention to individuals, often keeping up correspondence with people he met over many years.

The soon-to-be-released movie A Beautiful Day in the Neighborhood, which stars Tom Hanks as Mister Rogers, depicts Rogers’ friendship with Tom Junod, a journalist who interviewed him.

Rogers had a knack for intently focusing on whomever was in front of him at the moment, whether he was on-camera or off. 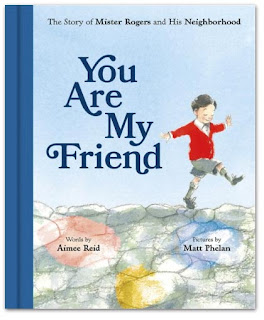 Before he starred in his own program, Fred worked at NBC. For a time, he was an assistant on a children’s entertainment program called The Gabby Hayes Show. The star of the show told Fred that the secret to connecting with a television audience was to imagine just one child.

I’m not surprised that many people say, when speaking of their connection to Fred through Mister Rogers’ Neighborhood, “I felt that he was speaking just to me.” He was.

Q: What accounts for the ongoing popularity of Mr. Rogers, more than a decade after his death, and what do you see as his legacy today?

A: Two words rise to the surface as I think of Fred Rogers’ legacy: kindness and authenticity. Everyone who interacted with Fred affirmed that he really was just as he appeared to be on camera.

He insisted on not wearing a costume in order to deliver programming to children. He presented himself as he was, endeavoring to be a friend. Even though he was working through the medium of television, with a massive audience, he managed to communicate a sense of immediacy and deep care.

When Fred was young, his grandfather said to him: “You’ve made this day a special day by just your being you. There’s no person in the world like you, and I like you just the way you are.” The genuine acceptance Fred experienced from his Grandpa McFeely profoundly impacted him, and he went on to share those words at the close of his programs.

I think that our culture is hungry for authenticity and thirsty for kindness. These qualities are never out of fashion.

Q: What do you think Matt Phelan's illustrations add to the book?

A: I couldn’t be more delighted with Matt’s work. He didn’t just illustrate the words of my text; he captured their emotional significance.

I love the image of young Freddie as he sits alone on his bed, looking out his window. We immediately understand his longing to be outside like other children.

Then, just a few pages later, when we see Fred at the piano, expressing his feelings through his music, we recognize the importance of that outlet for him.

When Matt depicts Fred running on the wall at his beloved grandfather’s farm, we experience the freedom and delight of that moment.

I’m grateful that Matt was excited about this project and that he, too, resonates with the values that Fred Rogers lived out. 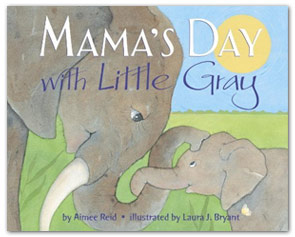 A: I’m working on a lyrical picture book text and dabbling with some ideas for a longer work.

A: You Are My Friend shares similar themes with my first picture book, Mama’s Day with Little Gray. Both books focus on sharing unconditional acceptance with the children who will hear them.

Both also have a connection to memorable times with my eldest daughter. I discovered Mister Rogers’ Neighborhood when Rachel was young, and my first book sprang out of a bedtime conversation with her.

One night, as I tucked Rachel in, she said, “When I grow up and you grow down...,” and she went on to describe all of the fun we would have if our roles were reversed.

The resulting picture book depicts a mama elephant and her calf as they go through their day. Little Gray tells his mama all of the ways he’d care for her if he were the big elephant. Each time he does, Mama Gray praises his character and competence.

It’s been rewarding to hear from parents and caregivers that their children have asked to read Mama’s Day with Little Gray over and over, relishing the affirming words that they hear being read to them.

The story of Fred Rogers’ life is a wonderful illustration of the power of acceptance in the life of a child. I hope it’s an encouragement to all those who wonder about the impact of their caring acts and words of kindness. Their impact is immeasurable.