Nicci French (the pen name for the wife-and-husband writing team of journalists Nicci Gerrard and Sean French) is the author of the new novel The Lying Room. Their other books include the Frieda Klein series, and they live in Suffolk, UK.

Q: How did you come up with the idea for The Lying Room, and for your character Neve?

A: The two ideas came together. The germ of the book was the image of a woman – married with children – looking down at the body of her murdered lover. Should she call the police and upend her life?

We immediately knew what kind of woman this needed to be. We’d spent a decade writing about Frieda Klein, an extraordinary woman, mysterious, a loner, different from us. By contrast, Neve is a woman like us, middle-aged (which we still are, just about) and struggling with the pressures of everyday life, children, work, a chaotic social life. And she’s also dealing with a crime investigation that she herself has sabotaged. 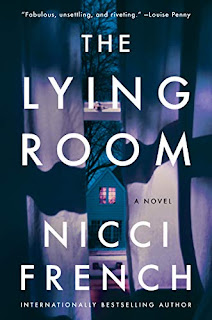 Q: Many of the novel's scenes involve Neve riding around various parts of London on her bike. Why did you decide on her being a cyclist?

A: Again there was a contrast with Frieda. Frieda walked around London, often alone, often in the middle of the night. It was her way of thinking. But Neve is always in a tearing hurry: she doesn’t have time to walk. We cycle around London too, we know her routes, we know the pleasures and anxieties of urban cycling.

A: In planning the book, we knew the starting point, we knew the end of the journey and we knew the main stages of the story. But as always, once we started writing and we really inhabited Neve’s mind, new possibilities occurred in her frantic attempt to hold her life together.

A: As soon as we thought of this, it felt perfect for the story. This is a story with sexual intimacy at its heart, but it’s also about another kind of lying: it’s about how little we know each other, even those who are closest to us. This isn’t a book about fearing your enemies; it’s about fearing your friends and your lovers.

A: Our next novel is about a woman who has to solve a murder while in prison.

--Interview with Deborah Kalb. Here's a previous Q&A with Nicci French.
Posted by Deborah Kalb at 7:04 AM